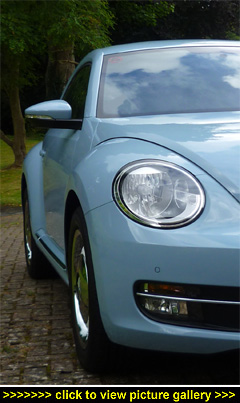 “The Beetle always reminds me of
a line from the cult movie Joe’s
Apartment: ‘We’ve been here for
a hundred million years and we’ll be
here long after you!’ VW’s loveable
‘Bug’ seems to have been around
forever — and it’s just gone though
another evolution...”

AND EVERY TIME IT GETS BETTER. Like Elvis, this Sixties icon still commands attention, especially now it's substantially longer, wider and lower and has been stylishly redefined with a longer bonnet, swept-back windscreen and a flatter roofline. Although it's a three-door hatchback, it has more of a coupe look about it.

All but the hippy-era romantics will be glad of a singular deletion — the flower vase on the dash (although admittedly it did make a handy pen-holder). But its departure is indicative of the new cabin's more driver-oriented theme.

Cheeky, too, is the way a 60's Beetle feature has been neatly integrated into the 21st century fascia: attractive body-coloured fascia, door panels and steering wheel inserts now add a liberal splash of pizzazz.

Naturally this latest Beetle comes fitted out with all the essential kit including electric windows (one-shot up and down), height-adjustable seats (not just for the driver but the front passenger too), 6.5-inch colour touchscreen audio unit with digital radio, 6CD autochanger, SD card slot and sockets for connecting to external multimedia sources.

Driver information is beautifully presented with crisp instrumentation, and attention to detail throughout the cabin is first class. The driver can pick from a varied menu as to what information he wants to see on the driver's display: digital speed (our default choice because it's less distracting in these days of speed camera overkill), range, plus the usual trip data, etc.

There are also plenty of cubbies including — a nod to the original Beetle here — an extra glovebox set in the upper fascia above the main glovebox; useful, and its upward opening lid doesn't clash with the downward opening main glovebox. Handy too is the deep rubberised open tray top-centre on the dashboard and the large drop-down drawer to the right of the wheel. The overhead sunglasses holder is another often overlooked essential.

Safety can be taken for granted thanks to a top five-star Euro NCAP rating, tyre pressure monitoring, a traction and stability control system, WOKS (VW's whiplash-optimised head restraint system), and a full set of airbags. And should you decide to check out the engine, there's a neat safety feature that you should be aware of — the bonnet can't be opened with the door closed. Clever when you think about it!

A hill hold function adds to the ease of driving, automatically holding the car when stopping for short periods in stop-start traffic as well as on any incline.

The seats are upholstered in a smart black cloth (with '3D' patterned centre panels) that's user-friendly for each of the four seasons.

They're also large and supportive, and getting to the back pair is no problem thanks to both the easy-entry sliding front seats (that work without a hitch) and the long side doors. The frameless front windows also come in useful if you need to get in or out in very tight spots.

A handy height-adjustable armrest separates the two front seats; thankfully it doesn't cramp the smooth-operating traditional handbrake, as many do. Plus the outer armrests are cloth-covered and very usable. And there's plenty, no, make that masses, of room in all directions for real-world adult bodies.

Those travelling in the back seats are far more comfortable than in previous Beetle models, with decent shoulder room and ample space for feet and knees. Plus you can rest your head on the headrest without touching the headlining. And despite the tapering rear windows, it's agreeably airy travelling in the back.

A nice touch worth mentioning is the sliding easy-entry feature on the front seats — even when the car is facing uphill and you're getting in or out, the front seat won't slip back but stays in position until you release it.

The boot is deep and it's also bigger — you now have 310 litres for bags and stuff. Fold the 50:50 split rear backrests down and this goes up to 905 litres. The tailgate opening is large, loading is painless, and the rigid rear parcel shelf-cum-luggage cover is easily removed — and just as easily stowed on the boot floor. During our test we were called on to move a mix of household items including a washing machine and large bookcase — and the Beetle swallowed them all without any fuss.

A front-engined powerplant drives the front wheels and can be either a 1.2 or a 1.4-litre four-cylinder TSI petrol engine. The 1.4 is mated to a six-speed manual 'box; the 1.2, as tested here, comes fitted as standard with a seven-speed DSG autobox.

The seven speeds aren't there just for some mechanical one-upmanship: seven gears allows for a lower first to improve acceleration from standstill, while the seventh acts as an overdrive to improve motorway economy and comfort levels.

Back to the 1.2 TSI: it's performance is feisty (it feels more like a 1.5-litre lump) thanks to 103bhp and 129lb ft — sufficient to get you to the benchmark 62mph in 10.9 seconds before pushing nonchalantly on to its 111mph top speed.

I say 'nonchalantly' because it doesn't mind which end of the rev band it spins its turbo — low down it punches easily above its size; mid-range there's more than enough for clean overtaking or some back-road high jinks; and cruising at 70-80mph is unruffled and relaxing.

Another major benefit of VW's DSG gearbox is that going 'two-pedals' doesn't harm the driveability, the economy or the environment: tailpipe emissions are 137g/km and the official combined cycle figure is 47.9mpg. A week's hard — and entertaining — driving saw 43.3mpg recorded by us. Pretty good for just 1,197cc hauling around a 1,297kg body.

In the past, the Beetle was more about being Herbie; more 'love bug'. Today's Beetle is far more sophisticated and certainly far more driver-focused — it's about injecting driving pleasure into your life. Don't worry; the charm's still there!

Handling-wise this new Beetle has an ace up its sleeve — or should I say under its bodyshell. The ace is spelt G-O-L-F because there's a lot of it underpinning this Beetle. No big surprise then that its road manners are good as well as reassuring. It's no out-and-out hot hatch but you can certainly have some serious fun.

In Design spec it's fairly firmly sprung but not so much as to spoil the ride (Sport trim cars have much stiffer suspension and come with low-pro-wrapped 18-inch wheels). Rolling on 17-inch 215/55 profile rubber keeps the Design Beetle civilised. Not only that, but the standard white-painted alloys, with their chromed rims and hub caps, look fab.

There's a deliciously serpentine long hill section on a road less travelled (by most) somewhere between Sevenoaks and the old Hog's Back that's part of MotorBar's secret test route — with the DSG selector in Sport mode, the Beetle tackled it with gusto and we came out the other end smiling. And that should tell you everything you need to know about the handling dynamics.

Still turning heads, still making friends, still the Auto für Jedermann (car for everybody), the Beetle will still be here long after you. — MotorBar