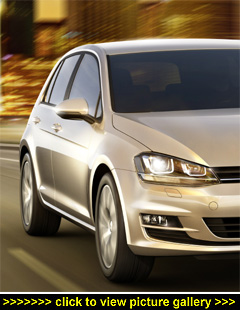 “Who has the easiest job in the car
styling business? It must surely
be the man tasked with designing
the new Golf. Here’s his brief in
short: How should the new car look?
Exactly like the last one, please.
Job done!”

WELL, I SUPPOSE there are differences in this all-new Golf, which now broaches its seventh generation. When you see a Mk7 coming, it looks lower and wider at the front. That's not too surprising, since the new Golf is indeed wider and lower than its predecessor, as well as being 56mm longer.

If there are few surprises on the outside, there are even fewer inside. That's no bad thing as the Golf has long been a benchmark of good ergonomics.

There's a new angled dashboard, which looks good, and depending on trim level, the dash materials do differ, but all versions I tried were impeccably finished, with extremely tactile plastics.

It's not quite as plush as the Golf's sister car, the Audi A3, as you'd expect — but you might be surprised at how close the Skoda Octavia that I've just driven now runs it in terms of quality and materials.

The extended wheelbase (59mm more than the Mk6) provides more interior space and a larger boot than before — you now get 380 litres of luggage space, compared to 350 previously. And there's plenty of headroom and legroom for four tall adults.

So how does the new Golf drive? The prospects were always good (the Audi A3, which shares the Golf's so-called 'MQB' platform, is a brilliant drive), and the Golf does indeed meet those expectations.

In fact, it's hard to think of a family car that has a better ride/handling balance. Yes, the suspension set-up is firm, but it's never uncomfortable.

And the firmness helps deliver an impressively composed cornering experience. The extra visual width of the Golf translates into a confidently planted stance that's small on body roll and big on grip. All of which bodes very well for VW's Golf GTI, arriving later in 2013.

On some SE and GT versions there's a choice of driving modes: a 'first' for the Golf. You can select Eco, Sport, Normal and Individual, each one changing the throttle mapping and engine management. The differences aren't stupendous but they do at least give the driver something to play with. A fifth profile — Comfort — comes on cars with the optional Adaptive Chassis Control, which features electrically-adjustable damping.

So which engine should you buy? If you're a company car driver, you'll probably be pushed towards a diesel because it's more economical and has lower CO2 emissions. But the gap between petrol and diesel in this regard are not as much as you might expect.

The 105bhp 1.6 TDI does 74.3mpg and emits 99g/km, while the 122bhp 1.4 TSI has figures of 54.3mpg and 120g/km. If you really need to save fuel, consider the 1.4 TSI ACT, which has clever technology that shuts down two of the four cylinders when they're not needed — and the transition between modes is utterly indiscernible. It'll get a claimed 60.1mpg and emits 109g/km.

Once again with a VW Group car, I'm forced to say that petrol is better than diesel. For starters, petrol versions cost less to buy — the 105bhp 1.6 TDI model in basic S trim costs almost Ł20,000 which is Ł855 more than the 122bhp 1.4 TSI SE, which has extra equipment, is a more rewarding drive and comes with a six-speed gearbox rather than a five-speeder.

If you've been driving a diesel for a while, you might have forgotten what a joy driving a sweet-running petrol can be. VW's latest diesels are far from unrefined, but they're definitely much noisier than the petrols. The 1.6 TDI, for example, suffers from a loud booming hum at low revs.

In contrast, the TSI is a gem of a unit: eager to rev, yet with decent low-down pull too, and much more refined than the diesel. And don't discount the 1.2 TSI engine; available in 83bhp and 103bhp guise, it's a crackingly sweet little unit. — Chris Rees