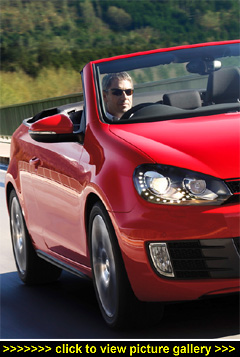 “VW has just wheeled out its new
two-door Golf GTI Cabriolet — the
first soft-top version of the iconic hot
hatch for nearly 20 years. Like the
GTI hatch, the go-faster (147mph)
Cabriolet GTI has a 208bhp turboed
petrol engine and does 37.2mpg...”

ASIDE FROM ITS FABRIC ROOF the Golf GTI Cabriolet is instantly recognisable as a GTI thanks to its distinctive 'telephone dial' alloy wheels, twin exhausts and honeycomb grille. Inside it's highly specced with AirCon, four electric windows, flat-bottomed sports steering wheel and retro-look tartan seat upholstery.

Priced at Ł29,310 (Ł1,300 more if you want the DSG auto 'box), the GTI Cabriolet costs Ł3,660 more than the GTI three-door hatch, and over Ł8,420 more than the range-starter Golf Cabriolet 1.2 TSI. However, the high initial price is likely to be offset at trade-in time in part by the model's exclusivity.

Interestingly, also this week, VW's sister brand Audi (who currently have four soft-top models in their range) published a cabrio/convertible survey showing that almost two out of three (64%) of owners either never or only rarely put the roof down; and almost half (46%) cited the stand-out looks of a drop-top as a reason to buy rather than wanting to enjoy some wind-in-the-hair motoring!

And with its fabric top up or down, the GTI Cabriolet is undeniably a smart-looker. The electrically-powered roof can be raised on the move at speeds of up to 18mph in 9.5 seconds — a useful and practical feature given our erratic weather.

The GTI Cabriolet sits lower than the standard Golf Cabriolet (22mm at the front; 15mm at the rear) and it has stylish 18-inch alloy wheels as standard. With the roof raised there's no loss in structural rigidity although it's a different story with the roof down.

Corner enthusiastically or speed over poorer road surfaces and, even though there's 140kg of extra weight in the car for increased strengthening and torsional rigidity, scuttle shake appears.

Roof up, the interior is comparatively noise free from wind; roof down and there's wind buffeting into the car — unless the standard wind deflector over the rear seats is fitted but this then limits the Cabriolet to a strict two-seater role.

Roof up or down, the firm, lowered suspension does not cope that well with potholes and they send shudders through the bodyshell. The handling, too, is unsettled over our poor road surfaces although it improves on smoother, high speed motorways — unless they're the concrete kind.

In other handling respects the GTI Cabriolet remains true to the Golf GTI in terms of cornering grip, thanks to the clever XDS electronic differential and sharp and precise steering. No doubt all the power and then taking the roof off is a compromise, but one I suspect most enthusiasts of fast hot soft-tops will happily put up with.

Under the bonnet is the usual Golf GTI 2.0-litre, four-cylinder turbocharged petrol engine which pushes out 208bhp and a meaty amount of responsive torque — 280lb ft from just 1,700rpm. With the manual 'box (the most popular transmission choice) this allows a 147mph top speed — not of any practical use in this country, of course, but the 7.3-second zero to 62mph acceleration time is much more usable. And that's a mere 0.4 seconds slower than the lighter GTI hatch.

Officially the fuel consumption should average 37.2mpg — but on my 'cruise' around the busy roads of Marlow and Henley, I recorded better: 39.4mpg.

For the record, the six-speed DSG auto returned 33.8mpg on the same route. CO2 emissions for the manual model are 177g/km, so road tax is Ł325 for the first year reducing to Ł215 for the second year onwards. Company car drivers will have to cough up 26% in Benefit-in-Kind tax.

Against? Pricey compared to non-GTI versions, poor low speed ride quality, scuttle/body shake at times with the roof down.

The value of wearing the iconic GTI badge for the latest Cabriolet addition to the Golf range will appeal to a small number of enthusiastic, top-down, go-faster motoring enthusiasts. But it is an expensive purchase compared to a lesser powered, but just as visually attractive, conventional Golf Cabriolet model. — David Miles