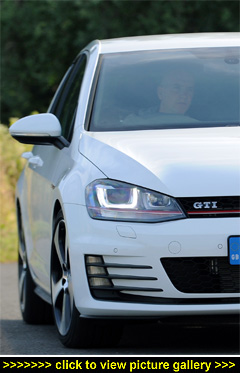 “The all-new seventh generation
Volkswagen Golf range was
introduced to the UK in January
this year and although four more
additions to the line-up have
just become available, it’s the
216bhp 2.0-litre TSI GTI that gets
keen drivers salivating...”

BECAUSE OF ITS HIGHER fleet and business user-chooser sales in the UK (where lower taxes and greater fuel economy are important factors), the Golf GTD turbodiesel outsells its 'halo' petrol-powered GTI model which for now remains the flagship of the seventh-generation Golf.

That is until the four-wheel drive, 295bhp Golf R 2.0-litre turbocharged petrol version scorches in next summer with a zero to 62mph time of just 4.9 seconds.

Priced from Ł25,845 for the three-door model and Ł26,500 for the by-far-the-best-selling five-door versions, the new GTI costs a hardly noticeable Ł195 more than the previous generation and despite substantial enhancements in performance, equipment and even a little more space due to the new MQB platform underpinning the seventh-generation Golfs.

The latest Golf GTI uses a Euro 6-compliant 2.0-litre turbocharged direct injection petrol engine with Stop/Start function that provides 216bhp and 258lb ft of torque (up from the 207lb ft of the previous model) plus there's an 18% improvement in fuel economy over the outgoing versions.

On my brief first UK test drive using country A & B roads around the Cotswolds at legal speeds, the fuel consumption was just 32.1mpg — a lot lower than the official figure but then it costs to have fun!

But there is even more fun to be had with the new Golf GTI line-up because for the first time the GTI is available with a Ł980 Performance Pack option which pumps up the power to 226bhp — for the extra cash you also get uprated brakes and a multi-plate limited-slip differential which allows faster and more controlled cornering speeds.

Top speed goes up a little, to 155mph, and the zero to 62mph acceleration time is fractionally sharper at 6.4 seconds. On the face of it this is hardly worth the extra cost but the fuel consumption and CO2 emissions figures remain the same as those of the standard GTI manual gearbox models, and so too does the insurance rating.

Where the significant advantage comes — in addition to the larger front and rear ventilated disc brakes and GTI lettering on the front callipers — is with the addition of a new front limited slip differential.

This system more or less eliminates torque-steer as the punchy torque rushes in from just 1,500rpm. Even better, it allows higher cornering speeds as the car's handling remains completely neutral.

Additionally, it also reduces the need to lift-off thanks to a multi-plate coupler positioned between the differential and right driveshaft balancing the power input and grip between the front wheels as cornering forces and grip change.

Even with my short test, using the same test drive route as the standard GTI it was noticeable just how much this Performance Pack adds to the joy of driving this car as it sweeps through corners unhindered rather than braking in, and accelerating out, of bends.

It's well worth the extra Ł980, but to prove that to yourself you don't need to drive the standard GTI back-to-back with the Performance Pack model to experience the benefits.

For? Better in all ways than the very good previous (sixth) generation GTI and for very little extra money you get more power, better fuel economy, lower emissions, and lower insurance costs — what's not to like? Plus, there's now the added appeal of the highly-recommended Performance Pack.

Against? About the only complaint would be that it's getting expensive compared to other VW Group brand's high-performance models using the same platform and technologies.

Overall the new and roomy Golf GTI remains just as desirable. Hear "GTI" and, even though other brands use that title, we automatically think Golf. It's the market leader in terms of desirability and image, and deserves to be given serious consideration if a high-spec, stylish, roomy go-faster quality five-door hatchback is on your shopping list. — David Miles