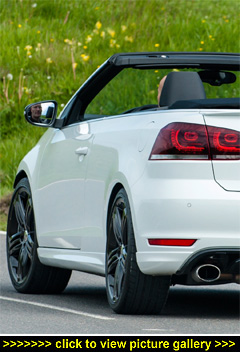 “You’ll need not a penny less than
È38,770 to buy one of VW’s Golf R
Cabriolets. Not only is it the most
expensive soft-top Golf ever, but it’s
also the fastest-ever open-top Golf...”

ADDING TO ITS CACHET is that only 100 are expected to be sold in a full year in the UK. At the heart of this model is a 261bhp turbocharged 2.0-litre four-pot petrol engine driving through a six-speed DSG automatic transmission.

This two-door drop-top model doesn't have the 4Motion system as used for the Mk6 Golf R hatchback, but is front-wheel drive only (the all-wheel drivetrain couldn't be used because of the space taken up for the additional strengthening in the Golf R Cabriolet's platform.

Like its slower Golf Cabrio stablemates, the R version has an electrically-operated fabric roof which can be lowered in 9 seconds (and raised in 11) at speeds of up to 18mph.

Inside, the specification is as high as it should be for the price with four individual leather-upholstered seats, leather-wrapped multi-function steering wheel, brushed aluminium pedals, DAB radio, Bluetooth preparation, AirCon, electric windows, cruise control, automatic lights 'n' wipes and a full complement of safety equipment including automatic roll-over protection.

With VW already selling the award-winning Mk7 Golf hatchbacks, models such as the Mk6 Estates and Cabriolets now only have a limited life-span, and it's quite unusual for carmakers to cross over two generations of volume selling models with niche selling versions.

And they don't come more niche than the Golf R Cabriolet: only 100 affluent motoring enthusiasts in the UK will be able to invest in one. And with, perhaps, two years left of production for this generation Golf Cabriolet, that makes just 200 on UK roads which only adds to its appeal. Plus the rarity and exclusivity should keep the residual values high for keen driver-collectors.

So three cheers for Volkswagen, who deserve to be complimented on producing such an exciting niche vehicle — rare these days for a volume manufacturer, especially when its new Golf models are starting to appear wearing the latest Mk7 bodyshell.

With front-wheel drive only, the 261bhp and 258lb ft of torque (from 2,500rpm) is punched out via a six-speed DSG twin-clutch auto gearbox — and it's a smooth and responsive combination.

Drive to the front wheels is handled through an electronic differential which reduces torque-steer but doesn't eliminate it all together — and that actually adds to the driving character of the car. The R Cabriolet feels more agile and not weighed down by VW's 4Motion all-wheel drive system although it does lack the sure-footed 4WD grip during cornering.

Fast though it is with impressive acceleration, the four-cylinder turbocharged engine and auto 'box make it very useable in stop-start traffic and at low- to mid-range speeds. When unleashed on the open road the Cabrio shows a brisk pair of heels, with 62mph coming up in 6.4 seconds and bags of punch to overtake slower moving traffic.

Fuel economy isn't its strongest feature though — although it's officially 34.4mpg in the Combined Cycle, my relatively short and gentle test drive couldn't muster more than 29mpg.

With CO2 emissions of 190g/km, the first year's road tax is È475 but reducing to È260 for the second year onwards. Insurance won't be cheap either thanks to a 39E rating. But given its near-È40K purchase price, the small matter of fuel, tax and insurance costs really aren't going to worry would-be owners, are they now?

In all other respects the Golf R Cabriolet is, apart from its premium quality interior and high specification, very much the same as less costly Golf soft-tops. The roof is easy to raise and lower and wind intrusion into the car isn't too blustery except at very high speeds.

With its lowered sports suspension the ride can be fidgety over rougher surfaces, and there is a small amount of scuttle shake with the roof up or down.

Overall, it's a good-looker both inside and out, and lucky owners will know they have enough power and performance under their right foot to see off most other cabriolet hatchbacks and a good few soft-topped sports cars to boot.

Against? Expensive to buy and run and uses the previous generation Golf platform. But if you've got the necessary readies, that won't stop you indulging in its fast performance and luxurious quality and basking (top down, of course) in its exclusivity. — David Miles