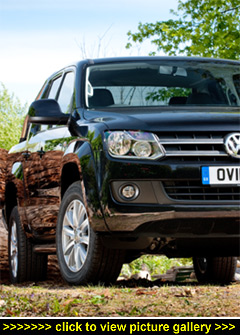 “Volkswagen’s all-new Amarok pick-
up has arrived, but only 900 units
are available to UK customers this
year and most have already been
snapped up...”

VOLKSWAGEN ALREADY DOES RATHER WELL with 4x4 SUVs (the large Touareg and not-so-large Tiguan), but the new Amarok double-cab pick-up crosses effortlessly between the German brand's commercial and passenger car line-ups. For the record, the new Amarok will only be sold through Volkswagen's UK Van Centre dealer network.

The Amarok is priced from Ł16,995 to Ł21,575 but being technically a commercial vehicle these prices exclude VAT and on-the-road-costs. Retail prices — where the bulk of the Amaroks are heading — are Ł21,343 to Ł26,829 (that's including VAT and on-the-road charges).

There's more to the Amarok [In Inuit mythology, Amarok is the name of a gigantic wolf — Ed] than meets the eye — in addition to its bold and muscular looks and wide stance, the Amarok measures up in a number of other ways.

For instance: it was voted the inaugural International Pick-Up of the year by the Van of the Year jury; it's the only pick-up with a choice of permanent or selectable 4MOTION all-wheel drive; it has the largest load space in its class (2.5 square metres); can accommodate a Euro pallet sideways!); is the first pick-up to offer CO2 emissions below 200g/km; the first pick-up range to offer smaller 2.0-litre, common rail TDI turbodiesel engines with outputs of 120bhp and 160bhp but without any loss of performance; and its braked towing limit is a hefty 2,690Kg.

Other than that, the Amarok is a four-door, five-seater double-cab and there are three trim levels: Startline, which is more workhorse than leisure; the likely best-selling Trendline (ideal for lifestyle and leisure use); and the executive Highline version.

Under the Amarok's skin there's a purpose-built ladder-frame chassis for strength and durability — making it easily repairable anywhere in the world. Furthermore, this is not a chassis adapted from some other SUV model — it has to be strong and tough so it is purpose-built and, for added durability, tough leafsprings supported by shock absorbers are used.

In a brief outing, both driving on- and off-road, the Amarok proved to be as impressive to drive as it is to look at. The most popular 160bhp unit, despite being only 2.0-litres in capacity, is unique in this sector and felt strong.

It wasn't as quick through the gears as larger 2.5 or the more common 3.0-litre units in this sector, but in these fuel-frugal and CO2-taxing days its performance is more than adequate.

The six-speed 'box has commercial vehicle roots so the gearchange was on the heavy side; notchy and not as precise as I had expected. The ride was on the lively side due to the rugged rear leafsprings and my test vehicle was unladen — but it wasn't uncomfortable; and the ride will be better once the vehicle is loaded or when towing.

Off-road the drivetrain technologies proved to be excellent and very easy to use. Such is the sophistication of these technologies that the Amarok is the only 4x4 I've ever driven where it is possible to drive down a very steep hill off-road in neutral gear as the off-road ABS brakes take over and allow the vehicle to just trickle down the hill.

Once the off-road and low-ratio transmission modes have been engaged, the electronic 'brain' takes over and applies the brakes when appropriate. Not a recommended way of driving, but this extreme situation was used to demonstrate just how capable and safe an off-roader the Amarok actually is.

As to fuel consumption, the 160bhp unit officially returns 35.8mpg in the Combined Cycle — on test my driving saw 35.2mpg; and that was impressive. Equally impressive is the great build quality inside and out, the strong and fuel-frugal engine and the very clever off-road driving technology. Another plus is the nicely butch styling — the Amarok performs as well as it looks. My only gripe was the heavy and notchy long-throw gearchange.

VW's double-cab newcomer is sure to satisfy a wide range of customer requirements for domestic, social or work use, so don't be surprised that demand is already outstripping supply — just get your order in quickly! — David Miles