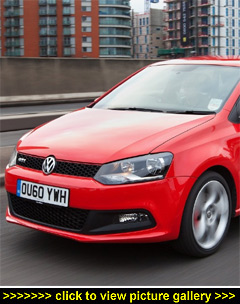 “Downsizers just wanna have fun!
And what better way than in the new
GTI version of VW’s latest Polo —
it more than makes up for its small
footprint with big (as in 142mph!)
performance...”

THE UPSIDE TO DOWNSIZING is how car manufacturers have made their engines smaller in capacity yet they now produce more power, deliver better economy and lower CO2 emissions — and go faster!

And it doesn't stop there — the downsized cars might be less bulky but they're packed with all the equipment and technologies of larger cars. And can be just as rewarding to drive.

A particularly good example of quality downsizing is the supermini-sized Volkswagen Polo which, although outsold by its Golf big brother, is proving to be really popular — over 45,000 UK sales last year and, in the first five months of this year, nearly 20,000 sold.

The Polo GTI uses a revised 1.4-litre TSI twincharged (supercharger and turbocharger) 178bhp four-cylinder petrol engine — that's 29bhp more powerful than the previous generation's unit. Just to prove that smaller stature doesn't cramp performance, the Polo GTI has a top speed of a quite mind-boggling 142mph! And it's quick off the line, too — zero to 62mph takes a sharp 6.9 seconds.

But it's not all top-end power: the GTI's supercharger eliminates turbocharger lag and provides a high 184lb ft of torque from 2,000rpm.

Neither is this impressive performance achieved at the expense of fuel economy or high tailpipe emissions; the latest version is 25 per cent more fuel-efficient: the official combined cycle figure is 47.9mpg (33.4mpg on a brief test drive on country roads). And with CO2 emissions of 139g/km, road tax comes in at a not-so-bad Ł115 a year.

The new Polo GTI is available in three- and five-door hatchback bodystyles with prices starting at Ł18,795 for the three-door and Ł19,415 for the five-door.

The GTI's 178bhp TSI engine is mated to a compact seven-speed, twin-clutch DSG gearbox that transmits drive to the front wheels. Greater traction and less torque-steer are assured in all conditions thanks to the standard XDS electronic cross-axle traction control system, which is brilliant.

Powerful, go-faster small cars can be a real handful with unpredictable front-end grip and extreme torque-steer, especially during fast cornering, even on dry roads. The Polo GTI's XDS system irons out these traits without, thankfully, dulling the performance or driving enjoyment.

It is the balance of the Polo in general, and the GTI in particular, that impresses. Naturally the GTI features substantial revisions over the standard car, including unique gear ratios and the relocation of the battery from the engine bay to the boot in order to improve weight distribution.

New springs and dampers are fitted to sharpen responses and also give the GTI a 15mm lower ride height than the conventional Polo. The GTI also has slightly narrower front and rear tracks (1,443mm and 1,437mm respectively; a reduction of 20mm and 19mm) than the standard Polo — a trait shared between the conventional Golf and the Golf GTI.

Talking of which, the Polo GTI's exterior styling cues are carried over from the Golf GTI, with a new front bumper featuring a deep airdam joined by a honeycomb grille element with horizontal red strips and a simple GTI badge; subtle sill extensions wrap around the lower edge of the body while at the back a new rear bumper features a small diffuser and a pair of chrome-tipped exhausts. 17-inch 'Monza' alloy wheels and uprated brakes with red callipers complete the 'GTI' look.

The Polo 1.4 GTI is a brilliant package — a miniature Golf GTI that goes just as fast, drinks less fuel, is cheaper for taxes, costs much less to buy and is of the same high build quality. Anyone downsizing from, say, a Golf 2.0 GTI, will suffer no hardship whatsoever. Because the performance is virtually the same, the only real difference is the extra Ł6,215 the Golf GTI costs along with its lower fuel economy and higher road and company car taxes. — David Miles