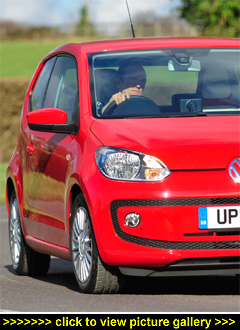 “Small it may be but Volkswagen’s
new Up! city car will not disappoint.
Already voted What Car? magazine’s
2012 Car of the Year, it also came
second to the Vauxhall Ampera /
Chevrolet Volt range extender electric
car in the European Car of the Year
competition. Up!, there’s no doubt, is
definitely going places...”

UP!, FOR ITS SIZE, is a surprisingly roomy car and despite the lack of two rear doors (five-door versions will shortly be joining the first-off-the-line three-door versions) there's reasonable access to the two rear seats. Boot space (251 litres) is okay for shopping but most other items will require you to drop the back seats — do so and you'll have a useful 951-litre loadbay.

Two types of customers are expected to buy themselves an Up! — young singles who will appreciate its relatively low price, low insurance and low running costs, and older couples who will be happy to downsize and reduce their motoring overheads.

More popular of the pair is the 59bhp unit — if you travel alone and without much weight, it does a good job of keeping up with traffic.

Press it to perform however and the engine lets you know how hard it's working, and it can run out of breath on long or steep ascents.

Even so, this 999cc 59bhp engine is ideally suited for commuting: officially it returns 62.8mpg but, surprisingly, on test two-up it returned an impressive 64.3mpg! With CO2 emissions a low 105g/km, owners will not pay a penny in road tax for the First Year although after that they'll get hit with a Ł20 annual charge!

Keeping a lid on motoring costs is the Up!'s 1E insurance rating and its Ł8,970 purchase price. Plus there are easy finance options: my test 59bhp Move Up! model can be on your drive for just Ł79 per month over three years with a 10,000 annual mileage allowance — all you need is a Ł2,336 deposit.

The 73bhp Up! is, as expected, more suitable for longer journeys, particularly those involving hilly routes. The extra power makes it a slightly stronger performer (106mph top speed and 0-62mph in 13.2 seconds) and means it has to work less hard maintaining high motorway cruising speeds. Both engines, incidentally, have the same 70lb ft of torque at 3,000rpm.

The larger capacity Up! still officially averages 60.1mpg but when I drove one it did better than that — 63.6mpg. With a 108g/km emission figure, road tax costs are the same as for the 59bhp model. The only difference is the insurance rating: just one group higher, at 2E.

When it comes to comfort the Up!, in the most popular Move Up! spec, serves up a better and more compliant ride thanks to its 14-inch wheels — the Up! Black's 16-inch wheels generate a firmer ride as well as seeming to give the car less ability to cope with potholes.

The seating itself is supportive and the three-door Up! easy enough to enter and exit, but if rear seat passengers are likely on a regular basis I would wait until the five-door model arrives. I also think that residual values for the five-door Up! will be higher in the longer term.

A key option is City Emergency Brake — a sensor and camera operated system which 'reads' the road up to ten metres ahead. If the driver is four metres from a hazard and not acting to avoid an accident by steering, braking or depressing the clutch, it activates the brakes to prevent a collision. The system costs around Ł200, fitted. Models with it also drop down to the lowest 1E insurance category.

Another option is a highly-sophisticated 'Maps & More' mobile Personal Infotainment device. This clips above the central console and can be used to organise navigation, telephone, information, and entertainment.

Reasons to go Up! are plentiful: it's the best city car on the market (and exceptional in most areas), comfortable, fuel-frugal, low tax and insurance, very competitive pricing for the no-frills version, and low-cost finance. Against that is wind noise on motorways and the fact that the 59bhp engine runs out of puff on hills.

A very smart and efficient transport solution for today's cost-conscious motorists. But above all, it's just so easy to drive and park. — David Miles