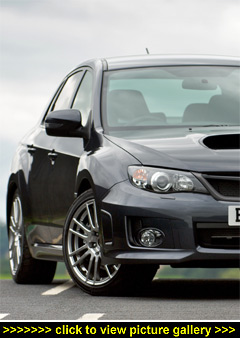 “Scooby is back and raring to go:
158mph WRX STI returns as a
‘proper’ saloon to be sold alongside
the five-door Impreza hatch...”

SCOOBY FOLLOWERS FELL OUT OF LOVE with the last Impreza WRX STI three years ago when it was introduced as a five-door hatchback instead of the beloved four-door rally-bred saloon.

But Subaru have seen the light and their revised generation 'go-faster' Scooby is once again available as a saloon. It is called, simply, WRX STI — with no mention of the name Impreza, which is kept for the latest but lesser models in the range. The WRX STI hatchback will remain on sale, the first time that four- and five-door versions have been sold alongside each other in the UK.

Both models carry a price tag of Ł32,995, an eye-watering Ł5,400 more than the previous Impreza WRX STI version. Subaru puts the increase down to technical improvements and more specification and also the high value of the Yen over the Pound.

Subaru UK Limited say that 80% of WRX STI sales will be for the four-door saloon version and they have 2,000 units available for sale up until the end of next year — 900 of those will be sold by the end of 2010.

The market for these rally-bred road cars has of course moved on and now they chase sales from the corporate user-chooser sector as well as the affluent motoring enthusiast. Like its big rival, the Mitsubishi Lancer Evolution X, the Subaru WRX STI is now a larger and heavier car; too bulky for modern national or world rallying.

The latest Subaru factory-made changes don't mean the new WRX STI has gone soft. It benefits from a stiffened bodyshell and an extensively reworked suspension system — based upon the better Japanese 'spec. C' set-up. Lower ride height and wider tyres also contribute to more direct and accurate control of the car, and greater feedback for the driver. The more rigid bodyshell has also made it possible to increase suspension travel, benefiting road-holding as well as ride refinement.

Exterior styling is extensively revised with new wheels, bumpers, enlarged rear-quarter panels — combined with the lower ride height, this gives the car a more muscular presence. Inside, the quality of the cabin materials has been upgraded, and the driver and passenger are assured of a secure and comfortable seating position thanks to the introduction of all-new Recaro bucket seats.

Performance-wise, the new four-door Scooby doesn't hang about: 62mph comes up in just 5.2 seconds and top speed is a claimed 158mph. Fuel economy is officially 26.9mpg in the Combined Cycle — impressively 24.2mpg in my hands during a short test drive at the SMMT industry test day prior to the cars going on sale this month.

Central to the agile handling of Subaru vehicles is the company's Symmetrical AWD system which incorporates revised front, centre and rear differentials.

The Scooby features a default setting of 41:59 per cent front-to-rear torque distribution for optimum balance, and the driver can adjust this while on the move using the four-mode Driver's Control Centre Differential system.

The WRX STI also incorporates Multi-Mode Vehicle Dynamics Control — Subaru's version of electronic stability control — allowing the driver to modify the point of intervention of this electronic aid to suit their own tastes and skills. A three-mode SI-Drive system is also fitted, enabling the driver to adjust the engine's characteristics to best suit driving conditions.

Aficionados of Subaru performance vehicles will be cheered by the news that a new exhaust system, with a larger centre muffler and larger diameter piping, means the engine's iconic boxer 'burble' is back.

During a very brief test drive 'blast' my instant view of the WRX STI saloon was that it is all grown up — now a business or enthusiasts car more than a rally machine. All the cabin spec is there, but against European manufacturers it looks a bit 'old-school'.

On the road the size and weight of this car are mainly masked by its undoubted performance: there is definitely a better balance and tighter control offered by the 'spec. C' suspension settings. The engine mid-range is brilliant; responsive and gutsy. I just got the impression that it wasn't quite so quick off the line or as sharp to respond from lower rpm.

Despite its size and escalated price it pretty much feels like a rally-bred Scooby of old, but a little more 'porky' than before. Against: Huge price increase and now into BMW Coupe six-cylinder price range, 'old school' look for the interior, now an 'executive express' rather than a rally machine. For: Return of the saloon body style, improved body control, better and more precise handling, sharper steering, upgraded and better equipped interior. — David Miles