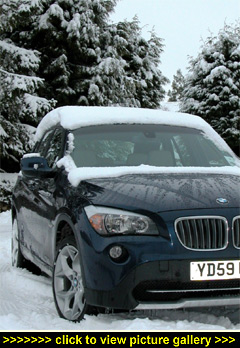 “Perhaps the current Siberian
climate gripping this country will
encourage motorists to come
in from the cold and go back to
buying 4x4s. In fact, owning a get-
you-most places 4x4 is really not
such a bad idea in the real-world...”

ALREADY THE COLDEST WINTER FOR 25 YEARS, the 2009/2010 Winter is forecast to get worse yet. So with our ice- and snow-covered roads already crumbling from Jack Frost, a 4x4 is not just for Winter — it's for UK life.

And if you're looking at 4x4s, BMW have just launched a new 'one'. Based on the current 1 Series platform, the new BMW X1 completes the X line-up of X3, X5 and X6 models. However, the X1 is less obviously a brashly-styled 4x4, looking more like a chunky five-door, five-seater estate with a bit more ground clearance than a conventional BMW Touring model.

There's the 18d with 143bhp and 236lb ft of torque and the 20d with 177bhp and 258lb ft, both available with either rear-wheel drive (sDrive) or all-wheel drive xDrive. The third, the 204bhp/295lb ft 23d, is xDrive only. Most X1s come as standard with a six-speed manual gearbox but the xDrive 23d is fitted with a six-speed Sport automatic gearbox with gear-change paddles as standard.

BMW's EfficientDynamics technology plays a part in the BMW X1 story, marking the introduction of Auto Start-Stop on an X product for the first time. Available on all manual transmission cars, the system improves fuel consumption figures. The BMW X1 also has the full suite of EfficientDynamics technologies including Brake Energy Regeneration, optimised aerodynamics, optimum shift indicator and on-demand use of ancillary units.

Currently, the X1 is only available with one SE level of specification for all models and, following the recent increase in VAT, prices range from Ł23,325 to Ł29,900.

BMW claim that the X1 is the only 'premium' compact Sports Activity Vehicle currently on sale in the UK although the Audi Q3 and the baby Land/Range Rover will be competitors in the future. Competitors will be the Toyota RAV4, Volkswagen Tiguan, Ford Kuga, Suzuki Grand Vitara and the new Peugeot 3008. Quattro versions of the Audi A3/A4 and A4 Allroad plus the Subaru Legacy Outback will also be alternative buys.

There will, of course, be some down-sizing customers from the BMW X3 (especially as the next generation X3s will be larger) but even so BMW predicts that 65% of sales will come from 'conquest' customers. Many users are likely to be company car drivers and business user-choosers attracted by the relatively low levels of Benefit-in-Kind tax. Just over half of all customers are expected to opt for sDrive two-wheel drive models — a pattern already set by other brands of medium-sized SUV-styled vehicles.

The X1 clearly takes some of its styling from other X models in the BMW range but it is less obviously a bulky 4x4 or SAV/SUV; it's more like a muscular estate car, and that will be attractive to some buyers. It looks very much like what a 1 Series Touring would be like if there was such a thing — more of an estate with large wheels and a bit more ground clearance than an SUV. The long bonnet is classic BMW 1 Series as is the wedge-shaped side profile. xDrive all-wheel drive versions can be recognised by their additional roof rails and satin-finish side sill guards.

Inside, the styling and functionality is yet more X family with semi-command seating positions and 40:20:40 folding-split rear seats and a large tailgate accessing the load area in a conventional SUV/hatchback/estate manner. The boot offers a very good amount of space (420-1,350 litres) although it is awkwardly shaped, and the rear seat backs lie at a slight angle when they are folded.

Even for tall passengers, space in the front is first class but rear passenger room is a little cramped. Most of the interior is excellent and reasonably well finished but you can see — and feel — that it is in places built to a price; the centre part of the upper dashboard (and home to the optional navigation system) looks a bit cheap but the optional wood finish trim does improve the situation.

The great thing about all BMW X models is just how well they drive on the road under most conditions. The xDrive all-wheel drive grip in the dry or wet is immense. That said, it is not so accomplished in the ice and snow as a conventional 4x4. None of BMW's sports driving heritage seems to have been lost for most conditions but care is needed in really bad conditions. The xDrive system doesn't give the driver a licence to be oblivious to treacherous roads. There is none of the body roll associated with 'tall' vehicles so the ride is flat and level during cornering. The suspension is firm, and the ride can be choppy on poorer road surfaces.

I have now had two spells in the new BMW X1. The first was in the absolute top of Scotland, lashed by gales and high winds. The on-road driving, with huge amounts of standing water, was safe and sure even in rear-wheel drive guise. Add the xDrive all-wheel drive function and the vehicle was even better, especially when it came to long stretches of rough stone tracks and very wet gravel sections such as you might find on a rally. More recently, I have had a longer spell with the xDrive 23d in the appalling snow and ice.

For me, a country dweller, this is the model I'd choose because the more powerful 204bhp/295lb ft 23d with its standard-fit auto transmission offers all-wheel traction and real performance whether dry, wet or in the mud. However, in the ice and snow it was less impressive mainly because of the wider 17-inch tyres which just sat on top of the snow instead of cutting into it and providing more grip.

Better use of the low speed torque could have been had if a manual gearbox was an option because the xDrive system and auto 'box combination doesn't allow for a second gear start-off — for best traction — and neither can the driver select a 'snow' or 'sand' grip mode for the drivetrain differential.

This version of the award-winning BMW 2.0-litre diesel unit, with its twin turbochargers, provides a fantastic amount of progressive torque from very low engine speed — or instant response for overtaking. At no point does it feel stressed — and it is quiet. With a top speed electronically-limited to 127mph, this engine is only marginally faster than other versions. Zero to 62mph takes just 7.3 seconds. The official average fuel economy is 44.8mpg and in Scotland my test car returned 35.7mpg but in the cold and snow of the Cotswolds this fell to 27.2mpg.

Against? Well, ride quality and refinement can be a let down over poorer road surfaces, some areas of poor quality interior trim in places and in snow and icy conditions the wide section tyres struggle to turn all-wheel drive into real grip. Working in its favour is the X1's size, choice of two- or four-wheel drive models, softer exterior styling over a conventional SUV, sharp on-road handling in normal driving conditions, low CO2 emissions, well equipped, relatively well priced and competitive pricing for a BMW.

However, don't get carried away; the X1 is no off-roader and has its limitations but with care it will handle tough on-road conditions. And it costs a great deal less to buy and run than a conventional 4x4. — David Miles