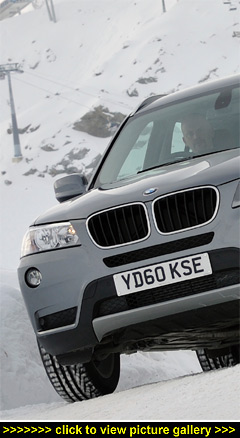 “Each generation of any new model
is expected to be better than the last;
not always the case but generally
it's true. The new second-gen BMW
X3 with the latest xDrive four-wheel
drive system is not just better, it is
vastly improved and is now the
premium compact 4x4 SUV it should
have been in the past...”

THE FIRST GENERATION X3 was engineered and built by Magna Steyr in Austria but the new versions for the UK are produced alongside the X5 and X6 in BMW's Spartanburg factory in South Carolina, USA.

The new X3 is larger, better equipped, has a vastly improved quality for the interior and is cleaner and more fuel efficient than the first generation versions which arrived in 2004. When it first went on sale in November 2010, the higher-specified new 2.0d SE actually cost £115 less than the outgoing one.

Now, since the VAT increase in January, the price has risen slightly to £31,135 for the current and only model in the range, the new 2.0d SE. The must-have new eight-speed automatic transmission adds a further £1,525 to this figure and the equally desirable Variable Damper Control (which adjusts the firmness of the suspension) costs an extra £930. There are, of course, other extra-cost option packs which can be added to meet a customer's exact needs.

As more compact premium 4x4s arrived on the market, X3 sales in the UK dwindled from a peak of 7,600 registrations in 2006 to around 2,000 in 2009. But BMW UK says that 4,800 X3s will be available for UK customers this year (2011) and there is reported to be a six-month waiting list as customers driven by the continuing bad weather and deteriorating road surfaces return to the SUV fold. In December 2010, actual UK retail sales for the new X3 were 216 versus the predicted 91 units.

The mainstay of the new X3 range is the initial launch version, the 2.0d SE and this will take 80% of UK sales even after further models are introduced. Future additions include an M-Sport spec version in April followed by 3.0 and 3.5-litre diesel units later this year. There will be no two-wheel drive models and all engine options will be diesel.

The 2.0d engine with the eight-speed auto 'box is actually cleaner for emissions than the standard six-speed manual transmission. The official Combined Cycle average fuel consumption is 50.4mpg for both transmission options, with CO2 emissions of 149g/km for the manual and 147g/km for the auto. This means a VED road tax bill of £125 a year; Benefit-in-Kind company car tax is a competitive 21%. Consequently BMW claim their new X3 to be the cleanest and most frugal 4x4 in its class — the most obvious premium brand competitors being the Audi Q5, Volvo XC60 and the Land Rover Freelander.

Being cleaner and more fuel efficient hasn't dulled the X3's outright performance either, with the highly-praised latest 2.0-litre, four-cylinder common-rail, direct injection turbodiesel engine (as used in other recent BMW models such as the 520d) pushing out 181bhp with 280lb ft of torque from 1,750rpm. Top speed with either transmission is 130mph and the zero to 62mph acceleration time is 8.5 seconds.

In real-life motoring conditions my test model, the X3 2.0d SE automatic, returned 39.9mpg on average with a best of 44.4mpg. Motorway cruising saw consumption drop as low as 33.4mpg. These figures are not close to the official 50.4mpg figure but in real-life the 1,790 kerb weight, vehicle size and the all-wheel drive system all take their toll on a 2.0-litre engine.

My test car's standard 17-inch alloy wheels were also fitted with winter tyres. The £1,400 run-flat winter tyre pack which BMW are promoting adds £1,400 to the vehicle's price but they work better at temperatures below seven degrees centigrade. They give more grip in adverse conditions as well as reducing the braking distance on wet roads — and they are also likely to increase the fuel consumption a little. For the record, the standard tyres are non run-flat.

The eight-speed auto gearbox allows for fast, seamless gearshifts as one ratio slides effortlessly to another. This auto also makes best use of the torque supplied by what is a relatively low capacity four-cylinder engine for a 4x4 of this stature. Perhaps at lower rpm the engine feels a shade less muscular than a six-cylinder unit, but once 1,600rpm is reached the engine feels strong and responsive right through the range.

The xDrive all-wheel drive uses an electronically-controlled multi-plate clutch system which supplies 60% of the torque to the rear wheels in normal use but all of the drive can be distributed automatically to the front or rear wheels when required.

The torque split is also used in conjunction with the dynamic stability control and braking systems during cornering to distribute power and grip to the wheels that need it most. There's also a hill descent control function to keep the X3 on the straight and narrow at a chosen speed on a slippery decline.

While the X3 remains a 'soft' off-roader — it isn't in the same class off-road as the Land Rover Freelander — it will cope with muddy tracks or snow covered roads but bear in mind the limited ground clearance is the biggest restriction to its ability as a recognised 4x4 SUV.

On road is where the X3 scores heavily. Despite its size it handles in an agile manner with lots of grip during cornering and virtually no body roll. My test car had the two steering extra-cost options to complement the standard electronic system: Servotronic steering costs £175 and varies the amount of power steering assistance, and the £370 variable ratio sports steering option makes for very precise steering control. I found the steering and handling to be needle-sharp.

One of the main criticisms of the previous X3 was the hard and uncompromising ride. The suspension system has been redesigned and it now serves up a far more compliant ride and is better suited to our poor UK road surfaces. The test car was also fitted with BMW's £910 variable damper control system which provides Normal, Sport and Sport+ modes. Normal is the best setting to keep away from the firmer and unsettled ride characteristics.

Size in the form of stature is another of the major changes for the new X3. At 4,686mm in length it has grown by 83mm; it is wider by 28mm; and the wheelbase has increased by 15mm. This gives a more substantial kerbside look and, helpfully, more interior space particularly for rear seat passengers. Externally, the X3's body styling looks even more contoured and muscular. The boot space for the five-seater has increased by 70 litres — to 550 — and with the 60:40 split rear seats folded this grows to 1,600 litres. The X3 also has a braked towing weight of 2,000kg.

Another niggle about the old X3 was the poor quality of the hard feel interior plastics used for the fascia, dashboard and parts of the door trim. Those have all gone: the finish is now almost luxurious and the layout first class.

Of course there are the usual extensive options and option packs lists — £9,335 worth fitted to my test car which includes the cost of the auto gearbox. But, in fairness, BMW use their press demonstration vehicles to showcase all the options available.

Niggles? The long list of options can quickly bump up the price, electronic handbrake, firm ride in adaptive suspension Sport/Sport+ modes and wind noise from the roof rails.

That noted, in all ways — size, comfort, quality, styling, technology, performance, cleaner emissions, better fuel economy, cheaper to run and nicer to own — the second generation BMW X3 is a huge improvement over the original one and thankfully not a great deal more expensive if we take the increased VAT element out of the price. Certainly it is the leader of the 'posh' compact SUV pack. — David Miles