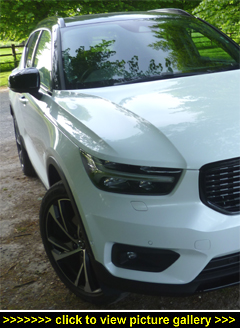 “First edition’s are always sought
after, be they collectable books
or works of art. And the same has
proved to be true about cars —
particularly if they’re already branded
by a Volvo XC40 badge...”

Given that it exudes that same easy-going confidence you'll find on other well-bred and well-dressed premium rivals such as Audi's Q3, the Range Rover Evoque and Mercedes' GLA, you can safely bet your shirt that tech- and style-savvy drivers, especially those with budgets in the Ł28K to Ł40K band, will be clamouring after one of these svelte new Swedes.

But for now, Volvo's Drive-E 2.0-litre diesel and petrol units are providing the XC40's motive power. Reviewed here is the proven 2.0-litre four-pot turbodiesel that's married to a fluent-changing eight-speed automatic gearbox with drive going to all four wheels.

Enhancing driveability are five drive mode settings: Eco, Comfort, Dynamic, Off Road and driver-set Individual. For fleet-of-foot everyday driving you won't go far wrong with Comfort, which was engaged for the bulk of our driving. But if it's economy that rings your bell then you'll be happy to know that the Eco setting really doesn't dent the XC40's driving pleasure and drivetrain responses.

The benchmark 0-62mph acceleration is done and dusted in a brisk 7.9 seconds; flat-out — assuming you're motoring on the Continent — you'll legally see 130mph. And there's plenty of stamina for overtaking at any speed. Officially 56.5mpg is the 'lab' figure for the Combined Cycle — in real life our week's test average saw a very liveable overall consumption of 42.9mpg. But then we do tend to drive 'em hard so the average owner should be able to best our best.

The XC40 uses a new steel monocoque platform designed for a front-mounted transverse engine driving either two or four wheels — a 'chassis' that will underpin all of Volvo's smaller new models as they come on stream. Size-wise, this platform ensures great cabin space on the inside while keeping the XC40's external nose-to-tail footprint to a socially responsible 4.3 metres.

If you've ever sat in an XC90 the phrase 'lounge-like cabin' won't be lost on you. The good news is that the XC40 brings space to the party in the same generous spirit as does its big '90' brother. Climb aboard the XC40 and you know immediately that you're in a Volvo — not just because of the especially good power-adjustable seats but the portrait-format tablet-style vertical touchscreen that dominates the centre of the fascia and centre stack.

In the XC40 it will be your fingertip controlling most of the core functions; from the infotainment to the climate and connectivity features via the pin-sharp 9-inch screen — no worries; it's all easy to fathom and chummily intuitive. Voice control (phone, radio, media, navigation, and climate) is also part of the package so if you're concerned about tapping a screen whilst on the move you can always speak your mind instead — and be equally obeyed.

The driving position is spot-on, offering a commanding view of the road ahead as well as expansive all-round visibility along with a first-rate customisable 12.3-inch TFT driver display (four layout themes incorporating a live mapping background if you'd prefer other information to be shown simultaneously on the central touchscreen).

In terms of classiness this XC40 effortlessly delivers as much as any other premium SUV cabin — impeccable Scandi taste and flair abounds, all imaginatively wrapped in upscale quality trim and materials that makes the joyfully uncluttered cabin a particularly rewarding place to spend time. There's much to admire, with plenty of invitingly touchable features from the sleek stylised vertical air vents either side of the slick infotainment screen and the 3D-patterned decorative foil finishings to the compact, nicely meaty and modish R-Design steering wheel.

All XC40 models are generously specified but the First Edition is definitely, as our American cousins would say, 'fully loaded' — not surprising as they are effectively specced-up hi-level R-Design Pro models.

Also present and correct is Volvo's Sensus navigation (including full European mapping with live traffic information), a brilliant 12.3-inch TFT driver display, infotainment system with DAB radio, satellite navigation, Bluetooth connectivity, Volvo On-Call for roadside and SOS assistance along with remote control of various functions (via a smartphone, smartwatch or tablet), Android Auto and Apple CarPlay smartphone connectivity plus access to all the apps you fancy.

And, being a Volvo, it comes with a comprehensive suite of safety and driving 'assists' beginning with indispensable stuff such as a digital speed readout with adjacent posted speed limits and tyre pressure monitoring to adaptive cruise control and speed limiter, active bending headlights, automatic led headlights with automatically dipping main beam headlights, and a heated windscreen.

The XC40's wheelbase is generous enough to prove that 'compact' doesn't mean 'compromise' when it comes to passenger room. The back doors open wide but aren't so wide that they make it awkward in ever-shrinking superstore parking spaces — getting in and, courtesy of a well-considered hip-point, is easy. The suede and leather seats are well shaped, comfy and nicely restful on long trips.

The XC40's back cabin is roomy enough for three adults although more likely it will be two or three youngsters or teens that get to travel in the second row. Whoever occupies the rear cabin, they'll enjoy hat-friendly headroom (despite sitting higher than those in front) along with great views out through large side windows; neither will they go short of decent foot- and leg-room.

Too many of today's SUVs don't ride nearly as well as they ought to — but no such penalty with the XC40. Volvo's engineers have clearly gone to a great deal of trouble with the chassis tuning to make sure that everything is tickety-boo when it comes to comfort on real-world roads. The acid-test is that 'our' XC40, rolling on bigger-than-standard 20-inch alloys and standard-fitted with the sportily firmer R-Design suspension, still rides surprisingly well.

With its fluent ride, settled body control and a soothingly quiet cabin, motorway trips are utterly stress-free. And it's here that you can enjoy the XC40's semi-autonomous lane-keeping Pilot Assist system that, along with radar cruise control, takes the strain out of long distance journeys by keeping you in your lane while always maintaining a safe distance from the vehicle in front even down to a full stop.

Handling is much the same: satisfyingly fit for purpose. It steers well and thanks to the all-wheel drive traction is consistently surefooted; enough to allow you to carry plenty of speed through bends and make good use of the muscular and easily accessed torque to exit with gusto.

Pressing on, you'll find the XC40 is easy to place, the well balanced handling serving up agreeable wieldiness — in fact you'll be pleasantly surprised at just how responsive and fleet of foot it is; and just how hard you can hack it, especially along winding roads. If, that is, you choose to when less pressed it covers distances so relaxingly.

Essential to making best use of any car's handling is a willing engine — and Volvo's well-proven 2.0-litre diesel serves up more than ample torque and acceleration: the 190hp D4 turbodiesel pumps out 187bhp backed up by 295lb ft of torque. The result is gutsy when you want it and unruffled driveability both in traffic and out on the open road.

Acceleration is delivered cleanly though the eight-speed autobox and powertrain for flexible performance either with a full complement of peeps on board or, as many owners will use it for, when towing — braked trailers of up to 2.1 tonnes (2,100kg) are easily managed.

With five doors and five seats you'll be expecting a fair-sized boot for your luggage — the XC40 doesn't let you down; it will accommodate a practical 460 litres of suitcases or shopping behind the rear backrests. Not only that but it's a deep and no-nonsense flat-floored boot easily accessed through a generous-sized powered tailgate with some extra storage space beneath the main floor that can add a few inches to the available cargo height when it matters. Opening and closing are both handsfree — and fast too (and can be done from the driver's seat or from anywhere outside the car using the key fob).

A neatly incorporated roller partition net prevents high-stacked loads from sliding about while the floor can be reconfigured to split the boot into two separate areas for segregating cargo. Unlike some rivals, the XC40 has dedicated room below decks for the roller luggage blind cassette when it's not needed. And for ski-like items, there's a convenient load-through hatch.

Forward-fold the 60:40-split rear seats (they really do fold totally flat) and you'll liberate more loadbay space for full-on load-lugging duties: an impressive 1,336 litres in all. If that's not enough then there are optional space-boosting solutions including boot-sized (430-litre) roof boxes plus, for more outdoorsy owners, bike and canoe carriers — and even a dog harness to keep Mr Pooch safe on the back seat.

The XC40 is a premium-branded compact SUV with ardent kerb appeal, one that's a real pleasure both to live with and to drive. It makes an ideal family car for everyday driving (not that driving solo is not seriously satisfying!) and, equally, is just the thing for those adventurous weekenders and 'tribe' holidays. ~ MotorBar