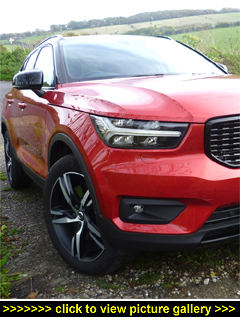 “When it comes to plug-in hybrids,
Volvo is very much ahead of the
curve — it’s the first carmaker to
offer a PHEV version of every model
across its line-up. And with head-
turning ‘Scandi’ styling and an
official 119-139mpg, the XC40 T5
Plug-in has a great deal to offer...”

THE T5 PLUG-IN differs from its larger-bodied and bigger-engined hybrid SUV stablemates in that beneath its clamshell bonnet beats a three-cylinder 1.5-litre turbocharged petrol engine. But, in cahoots with an 80bhp electric motor its 177bhp tri-pot belts out a combined 257bhp and a brawny 313lb ft of torque.

During our week with the car, quite a number of drivers (many of whom already owned other prestige brands) came over and admired the XC40. It's easy to see why people like this compact plug-in SUV so much — it shows off its fresh-out-of-the-box looks and green credentials with panache; amongst its peers the XC40's modish styling shines out like a kind deed in a dark world.

Owning and using a plug-in as well thought-out as the XC40 Recharge is a no-brainer. Sure it feels good to do your bit to reduce your carbon footprint but you certainly don't need to be a climate warrior to appreciate all it has to offer, especially if you're able to plug it in regularly to reap the rewards (not just financial) of running it almost wholly on electric.

If you're intending to make maximum use of the Recharge's electric drive you'll be pleased to hear that charging the battery pack won't disrupt your social life — plug into a wallbox charger and you can go from zero to 100% charge in around two and a half hours; even if you're stuck with a standard three-pin plug socket you'll be fully primed and ready to roll three and a half hours later.

With a fully charged battery you're officially good to go for 28 emission-free pure-electric miles. In real-life we covered 26 miles (driving normally) before the petrol engine fired up and joined the party. Whenever you need to drive using just electric power you can select the Recharge's Pure drive mode. Do that and with sub-25-mile one-way trips between recharges you're likely to see those astounding 100+mpg figures.

As is the case with all plug-ins, their real-world mpg depends totally on keeping the battery charged. Do so and big figures will be your reward. During our week with the Recharge we averaged — once we'd drained the battery pack! — 42.3mpg on longer runs without even trying.

A useful 'cheat' if you want the very best mpg is to always set the SatNav. Not just to stop you getting lost but because the system cleverly analyses your route and makes sure the XC40 is using the battery most efficiently on slow and urban sections of the journey while reserving petrol usage for the high-speed bits. And you won't have to give it a second thought! Also handy if you're not passing close by any charging points is that you can set the engine to recharge the battery while on the go.

So how does it go? In its Pure (electric) mode — in which it will swish along at up to 78mph — the Recharge is as quiet and smooth as you could wish; in Hybrid mode, which mixes and matches both electric and petrol, you really can't tell when the engine cuts in and out. However, whenever your right foot demands 'full speed ahead' then that's exactly what the engine-room will give you as confirmed by the strong 7.3-second 0-62mph showing.

Should you wish you can lock-in Power mode which keeps the engine in play (useful if you're tackling some tricksy twisties) although doing so tends to negate the economy gains of owning a hybrid; the vast majority of plug-in drivers will prioritise economy over tyre-shredding acceleration. Apart from that, left to its own devices the seven-speed twin-clutch automatic transmission and hybrid powertrain serve up such unruffled progress that you'd be crazy to miss out.

So long as there's some sparks left in the battery pack the XC40 plug-in is programmed to start in electric mode and to deliver enough performance to keep up with traffic, especially stop-start rush-hour congestion which feeds some regenerated juice back into the battery. When you do need to stamp the pedal to the metal you'll enjoy hearing the three-pot's thrummy soundtrack but when cruising motorways you'll strain to hear the engine even if the HiFi is taking a breather.

Settle into the XC40's front cabin and you'll be immediately soothed by the contemporary and beautifully-fabricated interior; quality is far more than skin deep and all the materials, like the leather and Nubuck upholstery, are not only are of high quality but look and feel it too. The seats, it's no exaggeration to say, are some of the very best you can buy and are comfortable from the get-go — and remain so however many miles you motor.

The front chairs are a real treat, offering support in all the right places and they're made nicer by quick-acting, three-stage heating, four-way power-adjustable lumbar and extending front seat-base cushions. From behind the compact, nicely meaty multifunction three-spoke Sports steering wheel you can see the bonnet and front wingtops — together with the excellent commanding all-round visibility, this makes for accurate placing on the move.

Comms are equally competent with a nine-inch central infotainment screen via which your fingertip can control just about everything from infotainment to the climate. If you're happier speaking rather than tapping whilst driving there's voice control which works in tandem with the touchscreen for the phone, radio, media, navigation, and climate — adjusting the cabin temperature, inputting an address in the SatNav or changing the media being played; are all doable without moving your hands from the wheel.

Volvo's On Call app provides emergency and breakdown call functions and stolen vehicle tracking as well as remote access of a variety of car functions via not just a smartphone, but a smartwatch or tablet. A data SIM card ensures a reliable Internet connection with multiple-device Wi-Fi hotspot plus there's a range of cloud-based apps that include TuneIn, Yelp and Google Local Search along with a Spotify app that provides access to all your playlists, artists and albums (as well as Spotify's search functions) without the need to use your mobile. Bluetooth hands-free, a DAB radio, and a 250W high-performance music system are also standard.

Simple to operate too is the customisable 12.3-inch driver display that, if you choose, puts the navigation mapping right in front of your eyes in a totally non-distracting way. Adding extra peace of mind are the clearly displayed road speed, speed limit, road sign and speed camera warnings and alerts. And however Brexit finally plays out, likely you'll still be glad of the SatNav's full European mapping.

This is a Volvo so comprehensive safety features are standard-fit, headlined by City Safety (pedestrian, cyclist and large animal detection plus front collision warning with fully automatic emergency braking, including at junctions), Oncoming Lane Mitigation (automatically provides steering assistance if you drift out of your lane, guiding you back and out of the path of any oncoming vehicles), and Run-off Road Protection (automatically tightens the front seatbelts should the car leave the road, while front seat frames with a collapsible section reduce vertical forces to help prevent spinal injuries).

Two grown-ups can travel very socially indeed in the rear cabin; three is also a can-do thanks to generous headroom and, although technically a compact SUV, there's no stinting on the passenger room which is spacious and very conducive to stress-free long trips. Views out are fine courtesy of higher rear seating and generous side glazing. Back seat passengers also get their own air vents, a wide padded central armrest with built-in cupholders, deep bottle-holding bins, useful oddment trays, seatback net pouches, and a USB port.

Even rolling on big 19-inch wheels your passengers will appreciate the smooth, quiet ride over the UK's pockmarked blacktop. On motorways progress is sweet and settled so passengers can lean back and chill; more challenging B-roads are taken with a pleasant fluency. And it helps too that the electric-only running is notably refined, as also is the switching between or combining of the hybrid's two power feeds. Better still, if you do need to get a spurt on this compact SUV won't upset your passengers.

When you want to just go with the flow the Recharge serves up very amiable driving. But while hybrid buyers are not normally given to driving as though their hair's on fire that's not to say that even the most laid-back people don't need to press on occasionally. When you get the call you'll find that the XC40 is more than happy to accommodate you.

With the plug-in system's hybrid batteries adding 'ballast' and the stiffer-springing that comes with the R-Design spec, the Recharge feels reassuringly planted, handling neatly and feeling confidently well-balanced; the steering is responsive (it gets some extra weighting in Power mode).

Nice also to have a choice of driving mode settings to suit every set of driving conditions and moods — choose between Hybrid (everday use), Power (sporty driving), Pure (prioritises electric-only operation), Off Road (rough road use; Hill Descent Control is activated), and Individual (lets you tailor each element to your liking).

When you need to kill your speed you'll find the brakes bring you to a standstill without any drama. However, like all hybrids the XC40 Recharge's brakes are of the regenerative kind and will, on first acquaintance, feel different to those you're used to on a non-plug-in, especially during light pedal applications. It's absolutely not a problem but worth mentioning and, needless to say, a few days behind the wheel and you'll be using them without even noticing.

For a compact SUV the XC40's tailgate hides a surprisingly large boot — 460 litres is more than an ample sufficiency for the young professionals, families (likely those including two children and a dog!) and empty-nesters who will probably buy one. Making life even easier is a powered tailgate for effortless hands-free opening and closing.

Longer and larger cargo, including flatpacks, can be transported by folding down the 60:40-split rear seatbacks — they create a genuinely level and seamless floor in a loadbay that will swallow 1,336 litres. Appreciated too is the ski-hatch and sturdy cargo compartment load protection net. Finally, if you have a need to tow then the Recharge will pull a braked 1,800kg. So, not only is driving solo satisfying but the XC40 is also perfectly obliging for family trips as well as carrying all the gear you'll want to take on an active weekend break.

The sculpted, ruggedly hip looks combined with a contemporary premium cabin, plenty of space and safety kit and a notably easy plug-in petrol-electric powertrain make the XC40 Recharge the perfect family-friendly SUV. Assuming the Swedish carmaker's mission statement was to make it the ideal 'changeover' car until all-electric cars rule, then it has succeeded. Mission accomplished! ~ MotorBar