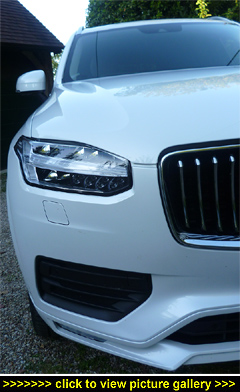 “While carmakers race to take their
model line-ups all-electric there’s
a new trend emerging embracing
‘mild hybrid’ assistance. Volvo’s B5
is a fine example of this green-hued
alternative and makes a convincing
case for driving a ‘mibrid’...”

THE MILD HYBRID SET-UP in the B5 XC90 takes the form of an electric motor and small battery. The good news is that you don't need to plug it in to charge the battery up because it self-charges using the energy generated when braking or slowing down. As well as greening-up emissions and fuel consumption, this provides a 'free' boost to the 2.0-litre petrol engine whenever necessary. Paired with an eight-speed autobox, Volvo's B5 mild hybrid drives just like a normal car.

Swing open the large driver's door, climb aboard, slide behind the wheel and you'll find that the handsome XC90's Scandi-style cabin is as classy and it is inviting. Measuring five metres from stem to stern, this spacious SUV is, whenever you need it to be, a genuine seven-seater for real-world adults.

Unapologetically a big beastie, the XC90 needs a strong heart. Which it gets in the shape of a 246bhp four-cylinder 2.0-litre petrol engine that's also good for a muscular 258lb ft of torque, ensuring an ample sufficiency of 'grunt' from the get-go. Prod the throttle firmly and it accelerates confidently — for those for whom every second counts, off the line to 62mph is clocked in a hearty yet pleasingly unruffled 7.7 seconds; and you'll only need to call on half of the B5's 134mph top speed to cruise British motorways.

All XC90 engines now come paired with a smooth-shifting eight-speed automatic transmission and in this mild hybrid version it makes getting a move on a satisfying and civilised affair, particularly in the cut-and-thrust of town traffic. Incidentally, to instantly switch between D and the Manual mode (or M back to D) you simply nudge the selector lever south; after that, flicking the lever to the right lets you perform up/down shifts with light fingertaps.

Adding to the B5's driveability is Volvo's Drive Mode which offers a choice of five distinct driving programmes. If economy is a priority then, using the tactile, milled thumb-wheel behind the gear selector, engaging Eco gives you a clear shot at bettering our test 29mpg; or you could opt for Comfort (recommended!), driver-personalised Individual, Dynamic, or Off Road.

Seven nights and eight days with 'our' B5 saw a real-life test average of 28.9mpg (as near as makes no difference to the official combined figure of 29.1-33.6mg) which, seven-seating size, autobox and all-wheel drive powertrain considered, is to be expected but is nonetheless still easy to justify if you want to enjoy all the good things offered by an XC90.

Whether you're the driver or riding shotgun, once settled in either of the XC90's firmly-bolstered sports-style front seats you'll quickly agree that they're so good you'd like to take one home with you. They soothe a tired body like few others, draining away every ounce of stress and tension as the miles pass timelessly by until you arrive revitalised at your destination.

As you'd expect to find in a prestige SUV, the front seats are power-operated with electrically-adjustable extending under-thigh cushions, powered multi-directional lumbar support, three-stage heating and three-setting memory recall. If you're not a fan of silky-soft Nappa leather then Volvo will, at no extra cost, upholster your seats in a vegan-friendly, top-grade, wool blend Slate-and-Charcoal coloured cloth that adds a tailored elegance to the cabin ambiance.

Tactile pleasure doesn't end with the seats because there's a heated (three-stage), great-to-grip, leather-wrapped multifunction wheel. Sitting commandingly behind the avant-garde-esque steering wheel, the driving position is imperiously commanding with a clear view down the bonnet.

And it's not just the tasteful upmarket trim finishes that mark out the XC90 as an upscale player but also the wealth of high-tech features starting with the nine-inch, high-definition, portrait-format touchscreen that's home to Volvo's Sensus infotainment and navigation system — if you can use a smartphone then you've got this handled.

Almost everything is controlled via the multifunction steering wheel or the central touchscreen but don't worry because your voice can stand-in for your fingertips — Sensus understands hundreds of plain English phrases from 'Set temperature to 22 degrees' to 'Listen to Queen' (take note, Harry!).

Another handy feature is the Volvo On Call app which, among other things, lets you, via your smartphone, smartwatch or tablet, remotely activate the climate control so that the cabin is already warmed (or cooled) when you open the door. Naturally you need never remove the key fob from your pocket or handbag, either to unlock, start, or lock the XC90.

Directly ahead of the driver is an active 12.3-inch digital instrument cluster that's easily customisable (just press the appropriate steering-wheel button). A large digital speed readout is shown above the posted speed limit (that flashes discreetly should you unwittingly stray over). Also indispensable is an easily-seen speed camera alert and a head-up display that includes your road speed, posted road signs, and navigation info).

If you are going to waft around in a cosseting seven-seater SUV you may as well indulge in some quality listening while you're at it. While the standard-fit 330-watt, 10-speaker audio system is fine, dedicated audiophiles might like to shell out extra for a 600W, 13-speaker harman/kardon set-up or even a concert hall-grade 1,400W, 18-speaker Bowers & Wilkins premium HiFi.

Equally appreciated is a WiFi hotspot for up to eight devices to connect to the Internet (installed web apps include Local Search, Spotify, Tunein, Weather, and Yelp). More traditional travellers will be content to listen to the Radio 4 on the DAB radio. Also included are Bluetooth (with hands-free voice control functionality), Apple CarPlay and Android Auto. For the pilot there's crystal clear 3D navigational mapping with reassuringly timely and accurate spoken directions. Destination input can be via your voice, fingertip or even received from your smartphone (if it's easier you can even sync to your Outlook Calendar to set your destination).

While this family-ferrying SUV can't help but take up a fair chunk of tarmac, placing and parking it is pretty much a breeze. That's thanks to the generous glasshouse as much as to the parking sensors at the nose and tail plus a brilliant 360-degree surround-view camera system. You can 'cheat' by letting the automated 'parking jockey' do it all for both parallel and 90-degree parking (this parking pilot comes as part of the optional Xenium pack that includes a powered panoramic glass tilt-and-slide sunroof and the surround-view parking camera).

In-cabin storage is good with a deep central tunnel tray incorporating interlinked dual-use cupholders, a sizeable bin with USB ports capped by a wide armrest between the front seats, large bottle-holding door bins with space to spare for other stuff at the same time, a decent-sized lit and lined glovebox, a biggish multi-use coin-box in the fascia, and a handy netted pouch close to the front passenger's right knee.

Safety tech is comrehensive and includes a full suite of airbags and inflatable curtains that protect all three rows of seats (plus an airbag for the driver's knee). The City Safety system features pedestrian, cyclist and large animal detection along with front collision warning and fully automatic emergency braking (including at junctions — a Volvo world-first). Unsurprisingly, the XC90 has been awarded a five-star EuroNCAP safety rating.

Legal hands-free driving is not yet on the statute books but the XC90 comes close with its Intellisafe Assist. This semi-autonomous drive technology helps with the steering (up to 80mph) and takes care of the accelerator and brake inputs required to keep the car within lane markings and at the desired cruising speed.

Oncoming Lane Protection is another valuable 'assist' that automatically provides steering assistance should you accidentally drift out of your lane, guiding you back in and out of the path of any oncoming vehicles. And if the XC90 ever unintentionally leaves the road, Run-off Road Protection prepares for the worst. Owners can also double-down on safety by adding Intellisafe Surround (Blind Spot Information System with Steer Assist, Cross Traffic Alert with Autobrake and Rear Collision Mitigation).

Seven-seaters often involve compromising either the second or third row but in the XC90 you don't have to give up anything. Three centre row passengers can all enjoy plentiful foot and legroom along with a fist of air above their heads; the three middle-row seats also fold and slide fore and aft individually and their backrests recline so everyone can personalise their own comfort 'bubble'. Lounging is most definitely on the menu. And if it's maximum privacy your passengers long for there are pull-up mesh sunshades built into the rear doors.

An integrated pop-up child booster seat for the centre spot can also be specified. You'll find the must-have cupholders in the drop-down centre armrest, air vents in the B-pillars and useful net pouches on the front seatbacks. Oh, and unusually, there are height-adjustable outer seatbelts.

Not all seven-seaters are made equal — some struggle to accommodate even smallish children. Not those in the XC90's third row, which can be used by near-six-footers and teens. The individual sixth and seventh chairs are the same size as those in the middle row and each has its own outboard armrest, cupholder and lidded storage, and is accommodating enough to ensure longer trips can be realistically undertaken.

The XC90's ride is nicely composed. Even rolling along on the optional and very swish diamond-cut Matt Graphite 20-inch alloys (19-inchers are standard), the ride on the standard passive suspension set-up (active air suspension is optional) is well-judged and nicely cushioned. The fab seats help too, as does the quiet and calm cabin atmosphere, all adding up to contented passengers and journeys that just seem to fly by.

However, the XC90 is not too 'soft' to rumble: the speed-sensitive steering is well-judged, body control is very well managed and the 'Touring' chassis achieves a tidy balance between comfort and roadholding courtesy of its road-biased 4x4 system that serves up plenty of grip when hustling along back- and B-roads. It may be big but it goes where you point it.

And when the likes of Storm Sophie sweep in the XC90 feels a very safe place to be. Flooded roads will rarely hinder your progress either, courtesy of 212mm of ground clearance that lets you wade through 450mm deep water. All good news what with gloomy climate doomsayers predicting ever more extreme weather. True, the XC90 is decidedly more luxury SUV than off-road warrior but should you choose to stray from the beaten track there's a proper off-road driving mode along with Hill Descent control to keep things shipshape.

Many seven-seaters' third row seats steal every last bit of luggage space. But not in the XC90. Even with the third row in passenger use there's still 356 litres. With the rearmost pair folded away under the boot floor there's a huge 1,007 litres available; drop the middle row chairs as well and you're faced with a cavernous 1,856-litre loadbay made even more practical by a seamless and completely flat cargo bay floor.

More than all that you get impressive versatility thanks to seats three to seven being easily configurable in numerous permutations. And with no load lip and a wide tailgate with fast-acting hands-free opening and closing, loading even bulky objects is delightfully hassle-free. You also get a flip-up boot divider, semi-automatic rollerblind load cover, and a removable cargo/dog guard. Those with towing on their agenda can haul a braked 2,400kg.

With its cool design-led looks the XC90 is a stylish family 'hold-all': it's safe, secure and good to drive and adept at transporting any combination of family and gear. Volvo's latest mild hybrid powertrain is a definite asset but above all else this is a well-mannered premium SUV intended to make life as smooth and stress-free as possible. A marvellously relaxing refuge in a rowdy world. ~ MotorBar