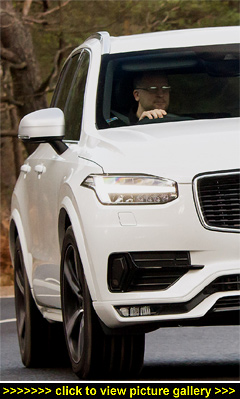 “Winner of the ‘Large 4x4 and SUV’
category in The Sunday Times
Top 100 Cars awards, Volvo’s all-new
XC90 is a revelation — with standard
all-wheel drive and seating for
seven in its fluently designed and
unmistakably Scandinavian interior,
it starts 2016 a top-billed player in
the fiercely competitive high-end
4x4/SUV league...”

THE XC90 EXEMPLIFIES ALL THAT'S BEST about big, multifunctional premium 'wagons', starting on the outside with its looks — the broad-shouldered XC90 is undeniably handsome, its clean-cut front-face emboldened by the confident upright grille treatment.

Well-considered flourishes, such as the signature 'Thor's hammer'-pattern LED daytime running lights, subtly but effectively underscore its individuality. And the fact that the XC90 received around 88,000 pre-orders says everything about its allure.

Actually, in an endearingly charming way, it is almost 'boxy'. But it's the chamfered 'boxiness' that provides the XC90's prized keynote feature: its abundant inner social space. It helps, too, that the four-cylinder in-line engine is mounted transversely, which leaves plenty of space in its five-metre length for bodies and baggage.

Talking of power, the engine range numbers three, all of which use the same core 2.0-litre aluminium engine: the 221bhp twin-turbodiesel D5; the 315bhp turboed and supercharged T6: and, arriving shortly, the 401bhp T8 petrol-electric plug-in hybrid that uses the T6's supercharged and turboed petrol engine to drive the front wheels with an electric motor to power the back pair.

These days the D-word is perfectly acceptable — even embraced — by most luxury SUV customers and the quietly powerful D5 twin-turboed diesel powering the XC90 will without doubt find favour with buyers. With only four cylinders and two litres it's no slouch, particularly as the power behind the 221bhp throne is a muscular 346lb ft of torque from 1,750rpm — enough to get it off the line to 62mph in 7.8 seconds.

Throttle response is keen and the lower of the autobox's eight ratios keep it feeling 'on the ball', ready whenever your right foot requests some additional 'go'. Most owners will be content to park the selector lever in Drive and let the auto do its own thing, which it does with aplomb: shifts are made fluently, and the long-legged eighth gear ratio favours good fuel consumption as well as ensuring pretty serene high-speed progress at Continental cruising speeds however many of its seven seats are taken.

The family-centric XC90 majors on interior space, refinement and comfort — which makes ticking the options box for the four-corner electronic air suspension (Ł2,150) a logical choice because it guarantees not just competent handling with reassuring body control but a smooth ride.

The steering is nicely judged and responsive and you'd never know that you're piloting something measuring five metres long. The four-wheel drive system delivers secure grip, not just in the sticky tarmac summer months but all year round — point the XC90's nose and there it faithfully goes.

The best driving mode, particularly if you're running on the optional 21-inch wheels shod with huge 275/40 Pirellis we were, is Comfort, in which mode the air suspension serves up a pliable and refined ride. Not that Dynamic has a downside because even then this big Volvo doesn't — as some do — cast aside its ride quality.

The arrival of the all-new XC90 SUV marks the first chapter in the complete renewal of Volvo's product range, which will continue in 2016 with the Swedish carmaker's equally all-new S90 flagship saloon. The XC90 is also the first model to sit on Volvo's innovative new chassis and that alone makes it stronger, lighter and better balanced.

Fitted with the air suspension the Volvo goes about its business in a confidently impressive way. The brakes are all that you'd expect and stopping — however hard and fast — is always accomplished. Bumps are absorbed without a murmur and it changes direction more like a passenger car than a sports activity vehicle. Add to that good grip and controlled body lean and it's pure Volvo: predictable and safe.

Pressing-on is something the XC90 is happy to do and as you up the speed the handling remains settled and trustworthy. However, its real forte is the amazingly unruffled cabin ambiance that makes both the shortest and longest trips a real pleasure whether you're steering or just indulging in some chilled-out passengering.

Which brings us to the seats. For years now Volvo seats have been some of the very best a body could hope to sit in. As long-term aficionados we're pleased to report that the anatomically-spot-on chairs in the XC90 are the Swedish carmaker's best yet. And inside the cabin it's a visual treat: fit and finish is impressively high; the trim looks rich (fine Nappa leather and attractive pale wood inlays) and all in the best possible taste.

Keyless entry and start ensures the business of getting aboard and driving away is fast-tracked. Upholstered in soft leather, the shapely, powered front seats not only offer three stages of heating and cooling (both agreeably quick acting), but the steering wheel rim also warms in three stages. Don't think this is something you won't use — there doesn't have to be snow on the ground before you switch it on because hand comfort on long journeys is infinitely better with it on.

The wheel itself is a well-groomed, three-spoke item with a satin black boss and high gloss black inlays and straightforward multifunction controls — best of all is its tactile and great-to-grip soft leather rim. Incidentally, along with power lumbar adjustment, the ab-fab seats also have adjustable side bolstering and extendable under-thigh support (and three recallable memory settings). The seats are also set commandingly high off the floor and provide first class visibility in all directions.

Other much appreciated touches include spacious footwells that indulge those who want, or need, to drive 'booted-up', the big, cooled glovebox fronted by a knee-friendly damped lid, a frameless rearview mirror that shows you so much more, the driver's display with its large, bright white digital speed readout, and the easily-used auto switching between dip and main beam to improve and de-stress night-time driving.

The centre console houses the short selector lever (P-R-N-D and +/- for manual changing, should you feel the need), the neat engine stop/start knob (just twist to start), a natty 'roller' switch for selecting the drive mode (Comfort, Eco, Off Road, Dynamic, and driver's personally 'mixed and matched' Individual), and switches for the electric handbrake and auto-brake (automatically brakes for you whenever the car is stopped; for instance, at traffic lights).

Where before Volvos had seats that you wanted to take out and use in your living room (now even more so), they now come with a touchscreen that you'd also like to swipe! The 9-inch tablet-like touchscreen infotainment display in the XC90 is integrated dead centre of the fascia where it's easily viewed and eminently usable by both the driver and front passenger.

Better still, it has fine contrast and superfine clarity with smart graphics and the straightforward menus can be quickly 'jumped' through. But it's no ordinary touchscreen set-up because it includes pinch and zoom and swipe functionality, so really does offer the usability and convenience of a tablet-style interface. Plus its real-world size and portrait orientation makes using it easy-peasy.

Actually, the screen reacts not to your physical touch but to the infrared 'curtain' projected just clear of its surface being broken by a fingertip — good news for glove-wearers or those with long nails.

The upside of all this is that the fascia is free of switchgear clutter. But if you're worried that you'll have to hunt through menus to adjust something critical, such as the climate control, don't be — the 'climate row' is always visible at the bottom of the screen and settings can instantly be changed by a quick tap.

Every XC90 comes with Sensus Connect, which includes Internet connectivity and access to a range of web apps such as Rdio, Stitcher, TuneIn, LocalSearch and Yelp. Another groundbreaking feature is the Volvo On Call app. Also standard on every XC90, this allows you to remotely lock and unlock the car, check whether the doors and windows are closed, and access the car's trip computer information.

It also provides the location of your XC90 on a map, and allows you to sound the car's horn and flash its headlights — perfect if you've forgotten where you left it in a busy car park! It even uses the car's GPS to track your XC90 if it's stolen and will automatically alert the emergency services if you're involved in an accident.

And if you really 'can't be asked' to even tap the touchscreen you can still manage because many of the car's entertainment and convenience functions can be controlled via the sophisticated voice control system.

The seven-seat packaging is very accommodating and entire families can travel together in style and comfort. The versatile second row is divided 40:20:40 and all three seats can slide and recline, and each offers plenty of individual space.

There's masses of room and adult legs can be stretched almost right out and, combined with a good range of recline and loads of headroom, the centre armrest makes the second row a haven for passengers with relaxation in mind. Pull-up perforated mesh side window blinds provide extra privacy.

Reaching row three is easy, thanks to the easy tilt-and-slide middle row seats. The rearmost pair of chairs are adult-friendly and those travelling in them get fine views out, cupholders, bins and air vents (if you plan to use most of the seats most of the time it's worth ticking the options box for 4-Zone climate control and then everyone will have their own dedicated heating and cooling). There's also a 3-pin plug socket for charging a laptop.

It goes without saying that the XC90 will keep you as safe as possible. In addition to a comprehensive array of active and passive aids, it features two new 'world-first' safety systems: automatic emergency braking at an intersection, and Run-off Road Protection.

Should the car unintentionally leave the road (or a car approach from behind that's unlikely to stop in time) Run-off Road Protection will tighten the seatbelts, move the brake pedal out of the way and prep all the airbags to protect you from whatever comes next with the principal aim of minimising the likelihood of any spinal injuries.

Like the robots in that Will Smith movie, Volvos are programmed not to harm a person; be they walking, riding a bicycle or driving another vehicle. Should any of these ever veer into your path the XC90 will automatically brake (and with emergency braking if that's called for) if you don't.

And while it obviously enhances handling ability and safety, the XC90's on-demand four-wheel drive is capable enough off the beaten track where it benefits from the air suspension's 267mm of ground clearance and can wade through 450mm-deep water.

The XC90's boot holds a 'lorra' luggage — with rows two and three folded you get a seamless, completely flat and safely locked-down loadbay floor with a cavernous 1,868 litres for cargo. The centre second row seat also folds down to provide a large load-through option.

Not only is the phone hands-free, but so is the tailgate. While you could 'blip' the key, you don't have to — so long as you have the key with you all you need do is gently wave your foot beneath the rear bumper and the tailgate will automatically open or close. And with satisfying speed.

Air suspension models top that with a button in the boot that lowers the rear by 50mm for strain-free loading. The boot also contains the usual bag hooks plus an effective and handy flip-up boot divider with an elastic holding strap for bottles. Always thought a tow hook looks out of place or is a liability off-road? Well, that's sorted too — on the XC90 it's powered, dropping down from behind the bumper when needed to haul a braked 2,700kg.