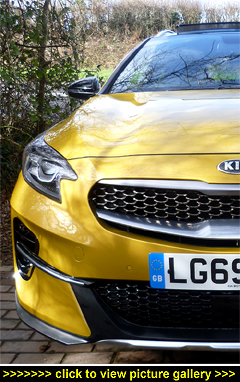 “British drivers have something of
an obsession with crossovers —
now Kia’s new XCeed offers them
a coupe-ish take on the nation’s
favourite bodystyle...”

YEARS AGO A WELL-HEELED friend would only ever buy Mercedes. When anyone suggested he was missing out by restricting his options to just the one brand, he would respond that the three-pointed-star marque had every style of car he might ever fancy, and that he was always pleased with whichever model he chose every car-change.

These days you could say the same about Kia: they offer everything from a fast sports saloon (Stinger) and a full-size SUV (Sorento) to a crossover (Sportage) and hot city car (Picanto GT-Line) — and pretty much one of every other body type to fill in the gaps.

Which brings us to their new XCeed — the admired Korean brand's latest CUTEY (crossover-utility). Factor in the brand's upscale cabin treatments and swish interiors and I wouldn't be surprised if my long-lost friend is now driving a Kia!

Following close on the heels of their similarly named all-new Ceed hatchback, the XCeed is a sleek, coupe-esque take on a crossover. As you'd expect, the boldly sharp styling comes with that more commanding driving position currently so much in demand. Kia has managed to imbue the XCeed's lines with subtle SUV cues such as black wheel arch inserts and lower door cladding without detracting from the sleekly purposeful looks capped by a coupe-like roofline.

Deciding on an engine is straightforward enough: choose from the entry-level three-pot, a turboed 1.0-litre petrol-drinker with 118bhp and a six-speed manual 'box; a turboed 138bhp petrol 1.4 T-GDi with the option of a seven-speed DCT autobox; or, for diesel fans, a choice of two 1.6-litre turbodiesels (114 or 134bhp).

The 1.4 T-GDi is what most drivers will go for. Officially it will return 40.4mpg in the combined cycle but a week's hard driving saw our T-GDi average an honest 39.1mpg and motorway cruises quickly saw that ramp up to the high forties.

Paired in the range-topping First Edition with Kia's in-house seven-speed dual-clutch automatic (you can have the six-speed stick shift if you prefer), it's well-suited for everyday driving with the power kicking in eagerly from low revs (and all the better for the 178lb ft of torque that's on tap between 1,500 and 3,200rpm). The autobox does a decent job of changing for you, dropping down the ratios snappily when you plant your right foot — the benchmark 0-60mph sprint is done and dusted in a quick enough 9.2 seconds, and the top speed is 124mph.

A feel-good cabin is now an essential for buyers at every level. Happily, Kia interiors continue to go from strength to strength. And the First Edition's cockpit is as upmarket as it is visually arresting — a very pleasing place to spend time, it scores highly with premium-feel trim, tasteful use of high-gloss black and satin chrome, eye-catching body-colour highlights on the air-vents and central dash and, most dramatically, seats upholstered in a flamboyant yellow-and-black honeycomb pattern fabric with vibrant yellow stitching and piping.

Inner space is something else in good supply; up front there's a fist of headroom and lots of shoulder and elbow room with an adjustable armrest between the front seats large enough to share plus roomy shin-friendly footwells.

The comfort of the shapely chairs is enhanced by effective faux leather bolstering; the driver goes one-up on the front passenger with all-electric seat adjustment including a powered 'easy-exit' function plus a two-settings seat and mirrors recall. Both front seats get power lumbar adjustability and three-stage heating that really delivers — from your lower back to under your knees. The heated wheel is brilliant too; try it once and you'll be hooked!

Along with plenty of room for your front passenger to stretch out, there's also more than enough easily accessible in-cabin storage slots to ensure all passengers' personal items are neatly stowed away: a large, lit and damped glovebox, dropdown overhead glasses case, a deep box under the centre armrest, bottle-holding door bins, dual-use twin-cupholders (with a sliding lid for when in storage mode), and a 'bed' at the base of the centre stack for your smartphone to receive some WiFi charging.

Comms are also up to scratch with a 10.3-inch 'floating' touchscreen with sharp graphics and an intuitive infotainment system featuring Kia's Connected Services and TomTom Live SatNav (fab 3D mapping and foolproof destination entry). Android Auto and Apple CarPlay with voice control are on hand for speedy smartphone connectivity while entertainment is catered for by a DAB radio, Bluetooth with voice recognition and music streaming, and an eight-speaker JBL premium sound system.

From behind the flat-bottomed, three-spoke sporty multifunction steering wheel you view a 12.3-inch digital instrument cluster display that presents all the information you might need. Helpfully, the posted speed limit (repeated on the central screen during active mapping) is shown adjacent to the large current-mph readout. Active turn-by-turn navigation visual prompts can also be displayed on the instrument panel plus there's voice control for the phone, navigation and radio. Rounding off the techie stuff is WiFi mobile charging and a USB fast-charge port.

Travelling in the aft cabin is certainly no hardship — the seats are comfy (the outer pair have two-stage heating) with backrests set at a relaxing angle, and the windows provide a good view out. The wide, well-padded drop-down centre armrest incorporates the obligatory twin cupholders and passengers riding in the back benefit further from dedicated air-vents, front seatback pouches, and usable door bins. Adding to the convivial atmosphere is the light flooding through the panoramic glass roof — its one-shot-op tilt/slide function and blackout sunblind allow fresh air or shade on demand.

Two adults will enjoy the ride and the generous foot room that comes courtesy of a minimal-height centre tunnel plus, in spite of the sloping roofline, enough space between the top of their heads and the glass ceiling. Three sitting side-by-side is doable too but, typically, most drivers will likely stick to a sociable two-abreast when it comes to grown-ups with three-in-a-line reserved for youngsters and teens.

The XCeed rides with a smooth pliancy that's welcome around the houses yet which also helps it deal effectively with undulating country roads. Most blacktop flaws are compensated for; even minor potholes are seen and not really felt. Add in the quiet and refined ambiance and the XCeed's rear cabin is an agreeable place to take a trip.

Despite the 'X' in the name, the XCeed is front-wheel drive only. While it's several inches longer than its hatchback Ceed sibling, the XCeed uses the same platform with an independent rear suspension set-up and fettled front struts, and rolls on twin-spoke 18-inch wheels shod with low-pro (235/45) rubber. The raised ride height might make you doubt the XCeed's dynamic abilities — until you start driving, and discover the stable and sure-footed road-holding that makes this coupe-crossover feel very much at home on the blacktop.

Press on and, despite the crossover-style 'jacking' there's minimal body lean through the corners. Plus the electric power steering is accurate and 'quick to go', and placing the XCeed accurately is a breeze thanks to decent front-end bite.

There's also a Drive Mode selector. In Sport setting the steering has more heft and throttle and gearshift responses are noticeably sharper. Engage Sport and use the selector in its manual mode to flick up or down the ratios and, solo or en famille, you'll be more that pleased at the way the XCeed flows through the twisties — and with more panache than a number of its rivals. The brakes — discs each corner; ventilated at the front — are exactly as you'd wish for: smooth, progressive, and reassuring.

It might wear a coupe 'cap' atop its glasshouse but that hasn't harmed the XCeed's luggage capacity. Power-open the electric tailgate (it opens and closes using the dash switch, key fob, and the tailgate buttons) and you'll be faced with an accommodating 426 litres for your stuff. Drop the rear seatbacks (quick and easy via the remote release levers in the boot) and you'll have the full use of 1,378 litres, made better by a seamless cargo bay floor.

Boosting the load-carrying versatility is a dual-height floor plus 40:20:40-split backrests that make it easy to carry two rear passengers while simultaneously transporting long and fairly bulky items far bigger than skis. If you prefer your 'cargo' to stay on the outside then the 1.4 T-GDi will pull a braked 1,000kg.

This new XCeed is an exceedingly easy car to live with and it's no cop-out to say that buyers will buy them because they like the looks. More significantly, its polished and personable styling come within a set of manageable dimensions plus it drives well and, like every other Kia, comes with the brand's standout seven-year warranty. ~ MotorBar