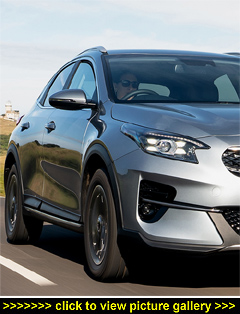 “PHEVs continue to provide a worthy
halfway point for drivers en route
to an all-electric car. And with the
crossover bodystyle still the number
one choice for many drivers, what
better than one of Kia’s crossover-
look plug-in hybrid XCeed models?”

AS WITH ANY plug-in, the headline-grabbing official fuel consumption is a fine place to start. In the XCeed's case the weighted combined economy stands at a whopping 201.8. If you plug-in consistently to maximise the XCeed's all-electric, zero-emissions city range (36.6 miles) and can manage the bulk of your journeys in 30-mile bites between recharges, then you really could see those eye-watering numbers for yourself.

Most drivers will need to undertake longer trips, in which case the all-electric range will offset running the 1.6-litre four-pot petrol engine that's the mainstay of this petrol-electric hybrid. Do so and you can expect to match our week's test average of an impressive 68.3mpg (yes, really!). We managed regular charging and were rewarded with 104mpg when driving in road conditions that favour the plug-in's electrified powertrain. So, if you're crossing over from a traditional combustion-engined car there's plenty of potential to maximise savings on your running costs.

Economy and green-ness aside, most people buy a car for its looks — like it or not, that's human nature. And you can see why the buying public are giving the XCeed — designed to be a sporty alternative to traditional SUVs — the thumbs up. With its rakish coupe-esque profile and some well executed crossover/SUV cues (black wheelarch protection and a hint of high-ridin' freedom), it's smart, self-assured and shimmers with street presence.

Swing open a door and you'll be greeted by an equally stylish interior with a strong showing of plush quality — and that's just in the penultimate '3' level trim. Not that you should feel pressured to move up the spec ladder to the Ł4K-dearer First Edition because the '3' is notably well equipped.

The tablet-sized, landscape format 10.25-inch touchscreen that 'floats' dead centre of the dash instantly takes your eye, but equally appealing are the contoured seats upholstered in faux-leather with tactile patterned cloth centre panels. They're good to the touch, look good and feel good to sit in, and benefit from comfortable but effective bolstering; both have three-stage heating, powered lumbar support and are height adjustable. The result is a sporty driving position with a full fist of headroom and a commanding view of the road ahead. Throw in a meaty, smooth-leather-rimmed (and heated) multifunction steering wheel along with tasteful fittings and you have another 'great-to-be-here' cabin from Kia.

Comms are comprehensive and the quick-acting touchscreen — underscored by a strip of touch-sensitive menu-jump buttons — is home to Kia's Connected Services featuring absolutely foolproof TomTom 3D satellite navigation. Its UVO telematics feature also means you can monitor charging and other settings remotely via your smartphone as well as send route directions direct to the car before a journey. Apple CarPlay and Android Auto (both with voice control) are installed, while more traditional entertainment comes through a DAB radio with a seven-speaker audio system.

Naturally there's also Bluetooth with voice recognition and music streaming and convenient USB ports. Boosting the usability score is a reversing camera system with dynamic guidelines supported by rear parking sensors. And whenever you need it you can call up a dedicated 'plug-in' screen which, among other things, pinpoints the nearest charging stations — a fingertip tap and the SatNav will guide you straight there.

All the everyday driving information is clearly presented on the colour digital display and two main dials in the instrument panel including comprehensive battery charge and data plus the all-important road speed readout; posted speed limits are shown on the main screen's mapping.

Family-sized in-cabin storage is provided with siamesed dual-use cupholders in the centre console, drop-down glasses case, a coin-tray, large shelf at the base of the centre stack for a smartphone, a second sliding-lidded tray ahead of the selector lever with 12-volt and USB sockets, a biggish bin capped by an extending centre armrest, damped and lit glovebox, and large bottle-holding front door pockets.

Within the XCeed's 4.4m overall length is a family-accommodating wheelbase stretching to 2.65 metres; so plenty of space for legs, knees and three pairs of feet. The seats are well-shaped with relaxing backrest angles and with good under-thigh support; they're also easy to access via doors that open to almost ninety degrees. Thanks to a generous glasshouse, the XCeed's rising rear window line (which looks slick from the outside) doesn't spoil the view out and passengers enjoy plenty of headroom.

The drop-down centre rear armrest is well padded and wide enough for two to share, and comes with a pair of built-in cupholders; with it out of the way three side-by-side is definitely doable. Rear passengers also benefit from dedicated air vents, deep front seatback pouches, and bottle-holding door bins. And for passengers who like a bit of privacy there's B-pillar-to-B-pillar privacy glass.

Gliding around in the XCeed PHEV is a satisfying and pleasant experience. Suspension is fully independent and the ride is well damped and comfortable, with no jarring from even the worst bumps. Sixteen-inch alloy wheels shod with forgiving 205/60 tyres help, as too does the level ride, flat cornering, and decent in-cabin refinement. In fact, the PHEV manages to be relaxingly smooth everywhere and not only when running in pure-electric mode.

So does that mean it's more satisfying for passengers than the driver? Not a bit. While the XCeed has no aspirations to be a hard-charging Stinger, it's more than happy to serve up some press-on driving if that's what you want although, to be honest, most XCeed PHEV buyers won't be slinging it about like a hot-hatch.

Dishing out power to the front wheels is a six-speed dual-clutch transmission that enables drivers — should they wish — to shift gear themselves, serving up a more enjoyable drive than the continuously variable transmissions found in a lot of other hybrids. This plug-in XCeed sets out to score on efficiency but even so its 0-60mph acceleration time of 10.4 seconds is more than lively enough. Top speed is 107mph; again, with a never-likely-to-be-increased motorway limit of 70mph, that's ample for legal cruising with plenty in hand for passing others.

It's worth remembering, too, that the PHEV's mission statement is to maximise economy and minimise its carbon output, not post record laps around the Nürburgring. That noted, the PHEV's kickdown is effective but for longer, more focussed performance streams press the Sport button; if you want even more control, nudge the selector lever sideways from D into the DCT's manual mode and use the shapely lever to make sequential manual shifts.

With a 1.6-litre petrol engine backed up by a transmission-mounted electric motor, the PHEV is good for a combined 139bhp plus 195lb ft of torque. There are three drivetrain modes: Auto allocates the best petrol/electric power mix for the circumstances with fluent switchovers; hybrid (HEV) lets the petrol engine cut in sooner when the battery is low; EV allows pure-electric running for as long as the battery pack has juice — a very practical 36 miles in town. You can select any mode whenever you wish and living in the country we found it especially helpful when encountering horses to instantly switch to silent-running all-electric.

The paddle-shifters behind the steering wheel aren't for changing gear but for adjusting the intensity of the regenerative braking — set at the maximum level 3 they provide intense deceleration whenever you lift off the accelerator — enough to slow the car noticeably at urban speeds without using the brake pedal; level 2 is perfect for general driving including back roads where ahead of a tricky bend it's as effective as dropping down a gear or two in a manual gearboxed car.

And every time you lift off with these higher 'regen' settings you send a bit more charge back to the battery pack. Encouraging regular recharging is the fact that drivers able to complete the majority of their daily drives and commutes on electric power alone will chalk up tremendous mpg figures. And with recharging the battery pack from zero to 100% taking just over two hours (using a 3.3kW charger), keeping fully charged is no hassle. Dynamically, the PHEV feels 'planted'; the motor-driven power steering is well synched with the car's chassis and, in spite of their regenerative braking duties, the brakes (discs all round; ventilated at the front) are reassuring when anchoring up.

The PHEV's battery pack lives under the rear seats and boot floor. Which explains why the plug-in version's trunk offers 291 litres against the non-hybrid's 426. Not that 300 litres is small — a regular shape, it's easy to load and swallows enough to make packing for Le Staycation a simple business.

The lifting parcel shelf load-cover, bag hooks, pop-up tie-down eyelets, corner bin (with a retaining strap for large bottles), and 12-volt power socket will also all be appreciated. Beneath the rearmost boot floor you'll find a lidded, full-width storage compartment for the plug-in charging leads and the tyre repair kit. Folding 60:40-split rear seatbacks offer multi cargo/passenger choices; or fold them both to create a 1,243-litre loadbay with a seamlessly flat floor. Your other option is to tow — go that route and you can haul a braked 1,300kg.

Kia are front-runners with their electrified vehicles (the all-new Soul EV and the very much in-demand e-Niro with its genuine 282-mile pure-electric range) but this new plug-in XCeed hybrid makes it very easy for those who don't want to jump straight into a full-electric car when coming from a standard petrol or diesel. For some, that and its lithe looks, undemanding driveability and impressive real-life economy will be enough; for others its seven-year, 100,000-mile warranty (which also covers the battery pack and electric motor) will seal the deal. Either way, expectations are XCeeded and you win big-time. ~ MotorBar