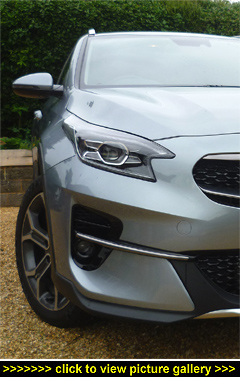 “We’ve all done it: bought a car
because of its looks. Sometimes
it works out just fine; other times
you find that looks aren’t everything.
That said, Kia’s XCeed is one of
the former — and its flair doesn’t
overshadow its functionality...”

A HIGHER-RIDING TAKE on Kia's rock-solid Ceed family hatchback, the XCeed serves up some eye-catching sparkle. And for those lusting after a more elegant SUV, its sharp, finely detailed and stylishly jacked-up looks put it into contention with some very credible company such as VW's T-Cross, the MINI Countryman, and Mercedes' GLA.

When it comes to engine choices the XCeed comes to market with a full flush of efficient powerplants: turboed direct injection petrol; 48-volt mild hybrid turbodiesel; and a plug-in petrol-electric PHEV notable for emitting a 'blue planet' 32g/km and potentially capable of 201mpg.

We've been driving the frugal 1.6-litre CRDi 48-volt mild hybrid turbodiesel whose four-pot unit is good for 134bhp and 206lb ft of torque. On the road that translates to 121mph, 0-60mph in 10.2 seconds, and a commendable real-world average of 54.6mpg. If you're a petrol person, then for you Kia has either a 158bhp 1.5-litre or a 1.0-litre with 118bhp, both T-GDi turbocharged direct-injection units.

Transmission-wise, Kia's smooth-shifting seven-speed dual clutch DCT autobox can be had with the 1.5-litre models although 1.0-litre versions come with a six-speed shift-stick; the 1.6 turbodiesel we've been driving uses a new intelligent six-speed manual transmission that employs guide-by-wire technology. XCeed line-up prices kick off at Ł21K for the 1.0-litre and run to Ł35K for the PHEV so there's something for every taste, every use, and every budget.

For the record, the slinky-looking XCeed is part of Kia's large Ceed family; its siblings include the hatchback Ceed, Ceed Sportswagon estate, and the coupe-esque 'shooting brake', the ProCeed. While all of the family members are good lookers, the XCeed is undoubtedly the poster boy for the range.

Swing open a front door and you'll find a particularly inviting interior. Given its taller roofline and raised suspension, getting aboard is easy on your body but, surprisingly, you don't feel you're climbing high up into the cabin. However, once you're there you will appreciate the elevated seating; the driver enjoys a first-rate driving position and a great view down the road, making the XCeed decidedly easy to place. The finish is swish and looks upmarket and the seats, upholstered in black cloth paired with black faux leather bolsters, are supportive and comfy — and stay that way even on long trips.

Space-wise it's all good news with a fist of headroom (twice that if you set the seats at their lowest position) and generous room around each front chair in all directions. Both height-adjustable front seats also come with electric lumbar adjustment and three-stage heating plus there are height-adjustable belts for that custom fit.

A very big box-ticker for many drivers will be the XCeed's foolproof non-touchscreen (Yay!) controls for the dual-zone climate system, so no distractions playing tap-the-screen on the move. The decor features premium-feel materials with satisfying fit-and-finish plus ample chrome and trim highlights to lift the all-black treatment. Steering is via a tactile leather-wrapped wheel made even better by a heated rim and comprehensive multifunction controls. From behind the wheel the dials are crystal clear: a conventional rev-counter and speedometer flank a central 4.2-inch information display that can show trip information, sat-nav directions and other helpful info as well as that most important digital readout — your road speed.

The XCeed also scores well when it comes to in-cabin storage. Even followers of decluttering guru Marie Kondo will feel at home as there's a place for everything courtesy of 1.5-litre bottle-holding front door bins, a spacious box beneath the sliding central armrest, a real-world-sized glovebox, sizeable dual-usage cupholders, a deep lidded tray ahead of the gear lever attended by a pair of USBs slots (one a fast-charger) and 12-volt power socket along with a bed for your smartphone, as well as a drop-down overhead case for your shades.

When it comes to infotainment systems what motorists really want is not tech overload but straightforward ease of use — and that's exactly what the XCeed serves up. Even touchscreen virgins will get to grips with the navigation and infotainment features housed in the high-set display occupying the dash's centre spot right from the get-go.

It helps, of course, that the XCeed's system, with its 10.25-inch, is one of the best to use with crisp graphics, easy menus, and snappy response times and makes using both the infotainment and the 3D satellite navigation a pleasure.

Not that there's any shortage of features as the full package includes telematics, Kia Connected Services and TomTom Live. You also get a DAB radio, media device connection USB, Bluetooth with voice recognition and music streaming plus as well as, for your smartphone, Android Auto and Apple CarPlay, both with voice control. There's also a camera system with dynamic guidelines to make reversing easier along with trustworthy rear parking sensors.

You certainly won't have any problems inviting adults into the XCeed's rear cabin. The back doors open wide, to ninety degrees, which makes not only for easy entry and exit but dealing with child seats — and those who need to use them — a doddle. Despite measuring just 4.4-metres nose-to-tail and providing generous room in the front, the XCeed still manages to offer a roomy and comfortable place for grown-ups travelling behind the driver. With decent headroom and good knee- and foot-room and comfortable, well-padded seats with backrests set at a relaxing angle, it's a great place to lounge.

Three is often a hard-to-please number in most cars' second rows, but the XCeed's rear seat passengers have room to stretch out. Even two-plus-one can be seated side-by-side harmoniously. Adding to the liveability are bottle-holding door bins, accommodating seatback pouches, dedicated air vents, and twin cupholders built into the wide and well-padded drop-down centre armrest.

Riding along in an XCeed is likeable for all the right reasons; apart from enjoying a superior view, it's comfortable and quiet. The good news is that despite the raised and reworked all-round independent suspension — 'softer' (but in a good way) than that of its Ceed hatchback sister — the XCeed feels nicely settled and reassuringly sure-footed as it neutralises the lumps and bumps of the UK's decidedly patchy blacktop.

In fact, whatever surfaces you're driving over it feels assured and comfortable. And it's not just those being passengered who will tell you that — for the driver it's a pliant and satisfying drive especially on longer trips when the XCeed effortlessly eats up the miles, making short work of what would otherwise be onerous journeys. And neither do the 18-inch alloy wheels, wrapped in grippy 235/45 Continental rubber, compromise the ride.

Engaging. Not a term you always hear about the driving characteristics of an SUV. However, the XCeed makes driving just that. While it may look SUV-esque, it's front-wheel drive-only but the accurate electric power-steering is satisfyingly quick and easily keeps up with the XCeed's dynamics to ensure you can enjoy its sweet spot. Unsurprisingly, the consensus is that the XCeed is the Ceed family's best handling model. And as already mentioned, the XCeed's suspension has been fettled to take full account of its higher ride height and, thanks to plenty of grip and well-controlled body lean, it feels fine and dandy flowing along twisty roads, all of which makes it pleasing long distance tourer too.

On urban roads the decent visibility, light controls, and good turning circle make manoeuvring in traffic a breeze. And when you need to park up there's a camera to take out any trickiness. Needless to say, it brakes reassuringly both when feathering your momentum in busy townscapes or during a full-on emergency stop.

While all the powerplants in the XCeed range are fit for purpose — be it going green with the hybrid PHEV, everyday load lugging, the school run or simply pootling around town — the four-pot diesels are still the best ones to have (while you're allowed!) if you plan on making regular motorway journeys; the longer the better.

The CRDi diesels offer strong performance. As tested here, the 134bhp oil-burning unit doesn't hang about, with a 0-60mph time of 10.2 seconds and a top speed of 121mph. Plus, with 206lb ft on tap between 1,500 and 3,000rpm, it can assuredly talk the torque, and it's nice and responsive across its range, even in the higher gears. Generally quiet when working, your passengers won't easily guess it's a diesel.

It might be a manual but it's also an intelligent one with guide-by-wire tech — all you need to know is that it works slickly and enables fast gear changes across the six ratios. A handy Drive Mode feature lets you switch between Eco, Normal and Sport settings. Sport does exactly what you'd expect and firms up the helm while liberating some very palpable urge.

And, no, you don't lose any of the hatchback's practicality by choosing the 'X' variant. In fact you gain some — most notably a bigger boot. At 426 litres, the XCeed's squarish boot (a layout that makes maximising lots of suitcases a no-brainer) is not only bigger than the standard Ceed's but access is excellent too. The range-topping XCeeds make it even easier, with a powered tailgate.

Not only that but the XCeed's higher-off-the-ground boot actually makes loading more efficient, thanks to its reach-for-the-sky rear hatch with flip-up parcel shelf-style luggage cover. Fold down the 60:40-split rear seatbacks and you'll have access to a 1,378-litre loadbay with a seamless floor, and although there is an angled step-up where the rear seatbacks fold down, it's not a problem.

Naturally you'll find all the tie-downs, bag hooks and stretchy nets you need to secure your cargo, along with a 12-volt power socket. Very handy, also, is the big, wide and deep storage box located beneath the floor. The XCeed's smart roof rails are fully functional and come in useful on staycation trips when all seats are likely to be taken. Plus, what you can't carry, you can always tow — up to a maximum of a braked 1,200kg.

Why settle for the boring squared-off looks of the average SUV when you can have a stylish alternative? Drive a high-riding XCeed and in addition to the sleek lines you'll enjoy all the practicality and versatility benefits of a 'boxier' SUV but without any of the bulk. And make no mistake, this XCeed is satisfying to drive too. The icing on the cake? As with every Kia model, it's the brand's very reassuring 7-year / 100,000-mile warranty. ~ MotorBar