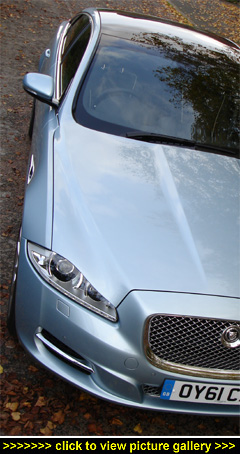 “Jaguar is dead. Long live Jaguar.
A sentiment that resolutely defines
the boldly-styled, aluminium-skinned
Jaguar XJ. And, for the record,
no true fans of the marque were
harmed during the changeover from
traditional to contemporary...”

PERHAPS IT'S THE COUPE-ISH AIR of Jaguar's four-door flagship saloon that makes it stand out from the crowd of undeniably prestigious rivals wearing pointed stars, interlinked rings or a stylised propellor blade.

As luck would have it, the same week we had the XJ on test we had another highly eye-catching piece of machinery on the drive alongside it — Audi's R8 V10 Spyder. With a combined worth approaching two hundred thousand pounds, the pair proved to be a major pull.

Tellingly, the XJ commanded a fair share of the interest. Not surprising given its bold styling — the imperiously thrusting nose and the almost blunt tail dominated by long, wide red-and-white slits that follow the bootlid's horizontal and vertical contours.

Even Jaguar's Design Director, Ian Callum, has been quoted as saying its 'love-hate' lines were intended to trigger a strong reaction. However, we encountered no negative feedback and everyone genuinely seemed to love it — so Jaguar's dramatic break with tradition is clearly vindicated.

Not that the 'man in the street' will be the prime buyer — our test, and admittedly top-spec, Portfolio model costs Ł66,000. But what a lot you get…

Externally it still exudes that Jaguar presence — most noticeable in the meaty, heavily-chromed grille with its snarling Jaguar's head badge. Move round to the tail — the most contemporary of its new body parts — and you'll see a very different breed of cat. One that hints at a cross-Atlantic influence...

And of the size that would fit well in Texas where, as everybody know, everything is bigger. But from wherever you think its provenance springs, it looks good. Very good.

You only really appreciate just how big 'fit for Texas' is when you park up in a supermarket — you'll hog every inch of the parking bay's width; and even more of your XJ will overhang the painted line under its nose. Despite that, parking is surprisingly easy, thanks to accurate sensors, a reversing camera and clearly defined guide lines on the 8.5-inch touchscreen. Climb out and adjacent family cars appear Lilliputian by comparison.

In the same way that royalty never needs to take money out of their pockets, XJ owners need never take their smart key out; keyless entry and start is standard. And, unlike some, the Jag's doors stay in whatever open position you want without springing back on your shin. Even the scissor-action door handles feel rather special. Setting the tone of good things to come are tasteful stainless steel Jaguar-branded kick-plates…

Once inside the XJ you'll find an Aladdin's cave of a cabin: plush leather upholstery and jewel-like detailing everywhere, from the fabulously dramatic and cleverly engineered central pair of air vents (they look intriguingly like the engines from a '60s jet fighter) to the magic of the virtual instrumentation — the best of its kind to be found in any car.

Digitally rendered on a 12.3-inch high-definition TFT instrument panel are doppelgangers of a full set of traditional gauges. A particularly clever innovation is the so-called 'torch effect' on the speedometer — if, for instance, the needle is pointing at 50mph, the sector from 40-60mph appears far brighter than the surrounding areas, making the actual speed reading easier to take in at a glance and also drawing your eye to it even as you start to look. Another unmissable visual cue: whenever you select Dynamic drive mode, the dials turn red — you have been warned.

A centrally-positioned 8-inch touchscreen in the fascia interfaces with the navigation, FourZone climate control, audio system, Bluetooth, trip computer and other user settings. You can, should you prefer giving orders to carrying them out, use the Interactive Voice system to control many of the XJ's functions.

A feature that really will have your front seat passenger enthralled is the touchscreen's Dual-View mode — this allows your passenger to watch a movie or TV (listening through a set of wifi headphones) while the XJ is on the move; at the same time, for safety reasons, all that can be seen by the driver are the infotainment menus or the SatNav map.

Seen it all before? No problem: the 1,200W, 20-speaker (includes two sub-woofers and two front door woofers) Bowers & Wilkins premium sound system serves up an aural feast — reproduction is crystal clear and distortion-free up to higher volumes than your ears will want to bear.

This cutting-edge new generation XJ is Jaguar's flagship saloon — as such, there's more than enough room to go round for four adults with a cosseting, beautifully-sculpted, soft-grain leather-upholstered chair each. Not only are these 20-way-adjustable seats seriously comfortable (you even get inflatable side bolstering for that perfect fit!), but they'll massage, heat or cool your body as desired.

Each front seat also features a three-position memory with the driver getting a powered steering column, one that adjusts for height and reach along with entry and exit tilt-away. And — don't knock it if you've never tried it — a heated steering wheel. Superb. Now's a good time to mention that all of the standard kit on this Portfolio model would easily fill two sides of a sheet of A4, so we're just mentioning a few of the highlights.

Four-zone climate control is, naturally, also standard: in other words, getting — and staying — comfortable in the XJ will be the least of your worries. Glance up and you'll see a luxurious black suede headlining; and what, from inside, appears to be a pair of large sunroofs is actually, when seen from outside, a single panoramic glass roof panel. Each has an electric sunblind, and the front section has a one-shot tilt-and-slide operation to add yet another pleasurable facet to the cabin ambience.

This XJ is a very democratic car: it treats its rear passengers with as much kid-glove cosseting as it does those travelling in the front. For instance, the 'active' rear seats are every bit as comfortable as those in the front cabin: their backrests are power-adjustable; they have powered lumbar adjustment; and you get the same heating and cooling features. And don't be fooled by that sloping roofline — our near-six-foot testers had ample knee and leg room to sit back and enjoy being chauffeured around.

Perhaps the biggest compliment you can pay this car (and Jaguar's engineering team) is to say that while this XJ can easily tempt you into the back seat, the pull of sitting behind the wheel in the front is even stronger — engaging and entertaining to drive in a way no German sporting luxury car can match, this is a Jag for drivers.

So, down to business. Press the Start button to fire up the engine and the rotary gear selector rises silently from the wide central tunnel, ready to operate the six-speed automatic transmission. Click clockwise round to Drive, give it some juice and there's a rush of impressions; all positive.

Paddle-shift in 'D' for more control (for instance, engine braking or approaching a tight roundabout) then ask no more, and the system will revert to 'D' automatically after a brief period if the paddles are not used again. However, if you're cornering, accelerating, or decelerating at the time, the fully-adaptive shift system holds the selected gear until changing up or down is appropriate.

If you need a greater degree of control and acceleration, press and twist the knurled selector another click to Sport; the change points are modified to make maximum use of engine power in each ratio. Paddle-shift in Sport, however, and you'll stay in manual mode. And, whatever you're doing, the active gear (1-6) and mode (D or S) is reassuringly displayed in large characters on the instrument panel.

Sink the accelerator pedal into the tailored overmats and you'll see 62mph on the speedo in six seconds. Slowing is equally impressive: hit the brake pedal hard and you stop. No fuss; no drama. You simply stop. Period.

Jaguar Drive control lets the driver tailor the XJ's driving experience to suit his or her mood or conditions. Safety first; the self-explanatory Winter mode. And then there's the Dynamic button marked, somewhat appropriately, with a chequered flag — engage this mode when you want to indulge in some full-out power driving; select Sport as well and there's no automatic gear changing, even if the rev limit is reached.

Ride comfort is decidedly good — perhaps a tad firmer than the traditional luxury saloon, but not enough to disturb sleeping passengers. And, in spite of the 19-inch rims and 245/45 front and 275/40 rear Dunlop tyres, passengers will find it hard to tell what surface the XJ is running over.

As already mentioned, the XJ's dual-personality allows the keen driver to indulge its more sporting rear-wheel-drive character wherever and whenever.

Choose the out-and-out performance driving setting (Dynamic) and you'll be in for a very pleasant surprise. For such a large car, the XJ feels amazingly wieldy — hustle it round corners and through a tricky string of S-bends and it feels truly focused.

Deservedly taking some of the credit for this agility is the quick and confident steering and, of course, the automatically-adjusting electronic dampers.

Really press on and Yes, there is a tad of body roll — just enough to remind you you're punching a very long, luxurious set of wheels. Thankfully, and quite intentionally, it's never enough to spoil your fun.

Carried away as you'll be by the dynamics, it's easy to overlook the fuel consumption. But it's definitely worth a word or two: officially, the combined cycle figure is 40.1mpg — our week's hard driving saw 34.2mpg. Hugely impressive given the sheer size of this big cat.

The boot is another place worthy of mention, and not just because it opens and closes itself — with a little electronic prompt from you! As the bootlid automatically rises, you'll be presented with a liberal 520-litre luggage bay; it's wide and not too deep but still swallows a lot of luggage. Sorry, I've no idea how many golf bags it will hold but then, if this were my car, I wouldn't be wasting time driving on the green when I could be driving on the road…

This new XJ saloon is a breath of fresh air — while there's a subtle Britishness about it, Jaguar have cleverly not let it get in the way of the numerous and impressive high-tech aspects. And they have, by design, arrived at a near-perfect middle ground between superbly comfortable and dynamically invigorating.

Dr Jekyll and Mr Hyde? Far from it: unlike Robert Louis Stevenson's creations, there's no negative Edward Hyde to spoil the party; this XJ is a fluent partnership of positives. Enjoy! — MotorBar