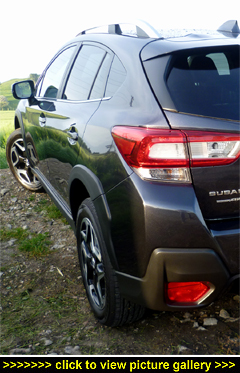 “Subaru’s sharp-suited-and-booted
XV might look like a swish soft-
roader but what’s under its skin
makes it a lot more capable tackling
off-road terrain than many of its
rivals...”

ALL-NEW FROM THE GROUND UP and sitting on a brand-new platform (chassis), powered by petrol engines and boasting an appealing and smartly finished cabin, this latest XV is exactly the type of crossover that should sell very well in today's trendy 'me too' compact SUV segment.

Whichever angle you come at it you have to admit that this XV looks purposeful. There's a polished ruggedness to it — emphasised in particular by the noticeable can-do ground clearance, well-planted stance and strongly defined wheel arches with protective angular cladding encasing meaty 18-inch alloys.

Size-wise it's Subaru's 'compact' SUV; their Forester is the next size up, while the Outback wears the 'full-size' label. Inside the XV you'll find a spacious and well-trimmed cabin with good quality black leather giving off a premium air that's as welcoming as it is neatly laid out.

The expected colour touchscreen infotainment and 3D navigation system is in its rightful place; crowning the centre stack. It's a crystal clear eight-incher so easy to read; it's also simple to use. Immediately below it is a strip of 'jump' buttons to quickly take you into frequently used menus such as Map, Apps, Radio and Media. Underscoring this is the two-zone climate control panel with three easily-adjusted-on-the-move knurled rotary knobs.

There's generous space up front — you sit high with decent headroom and getting in and out is easy. And the shapely, well-bolstered seats are supportive everywhere they should be and smartly finished with perforated centre panels and sporty orange highlight stitching (also on the doors, dash and the good-to-grip leather rim of the three-spoke multifunction wheel). The driver enjoys multi-way powered seat adjustment and both front seats feature fast-acting two-stage heating.

Wheel-mounted controls operate the adaptive cruise control, speed limiter, telephony, audio, and the 4.3-inch LCD multi-information display set between the trad-style rev-counter and speedo and which along with a wealth of core driving information and safety status graphics features a digital speed readout. Another important plus point is the commanding driving position boosted by fine all-round visibility.

Roomy accommodation is not so good if there's not ample room to stow all those annoying items, from mobiles to bottles, that drivers and their passengers need to cart around with them. Thankfully the XV cabin has plenty of hidey-holes: a large glovebox, a capacious storage box under the padded armrest between the front seats, big bottle-holding front door bins, a pair of large siamesed dual-use cupholders, and a 'cave' at the base of the centre stack.

The XV's rear cabin confirms its five adult capacity with plenty of leg, knee and foot room. It's also easy for access, courtesy of the seating's high hip-points that allow you to just sit and easily swivel in your legs. Once there the backrest angles are relaxing, and made better by the large drop-down central armrest with built in cupholders and comfy outer armrests; cans and small bottles will fit in the door pockets.

Views out are unrestricted and rear passengers benefit from sitting about six inches higher than those in front. If the sunroof blind is open then they'll be bathed in light — but even with it closed it's still a pleasant place in which to travel. A grown-up sitting in the centre spot will be fine, and parents will be glad of the Isofix child-seat fixings and childproof rear door locking.

Subaru bills the XV as 'the safest small car in Europe'. Certainly the list of safety kit and driver assists is comprehensive, starting with Subaru's symmetrical all-wheel drive (including X-Mode and Hill Descent Control for extreme driving conditions) and Subaru's high-tech Eyesight safety system that uses two stereo cameras to capture 3D colour images as it constantly monitors the road ahead (up to 110 metres) for potential hazards. EyeSight can actually distinguish types of objects as opposed to just seeing that there is an unidentified obstacle, recognising pedestrians, vehicles, motorbikes, bicycles, and lane markings, which makes it more accurate than traditional camera and sensor technologies.

There's also a five-star EuroNCAP safety rating, autonomous emergency braking, Vehicle Dynamics Control, hill-start assist, adaptive cruise control, lane keeping assist, blind spot monitoring, Lead Vehicle Start Alert (warns you when the car ahead moves off — surprisingly useful in snarled up traffic and stop-start motorway situations), as well as rear cross traffic alert (like eyes in the back of your head, it scans behind when you're reversing and warns if anything is approaching).

Petrol has finally come full-circle and the once bęte noire is now the PC choice (well, at least until 2032, by when our political masters intend for us all be fully conscripted into the EV camp). So, make the most of the combustion engine while you can. Certainly Subaru are — the XV can only be had with a petrol engine although you do get two choices: a new 1.6 and the comprehensively upgraded 2.0i that we've been driving this past week.

The 2.0-litre unit continues the Subaru Boxer tradition — of having four cylinders with two pairs horizontally opposed. It pumps out 153bhp backed up by 144lb ft which is served up willingly and is enough to take you to 120mph and, on the way, pass 62mph from standstill in 10.4 seconds; it's also pretty sparing with the unleaded — a week's hard driving saw it return an honest 39mpg against its official Combined Cycle figure of 40.9mpg.

On the move the mid-range grunt is strong enough to feel while that idiosyncratic once-heard-never-forgotten thrummy Boxer heartbeat is immediately recognisable — for everyday driving, though, it's as smooth and quiet as it needs to be.

It's also partnered with a new CVT Lineartronic autobox which, despite being a continuously variable transmission, can simulate seven gears — accessible via the wheel-mounted paddle-shifters should you feel the need to intervene. However, that's a bit like buying a dog and barking yourself — as you've paid for the auto it's best to let it get on with things itself and just enjoy the ride.

Talking of which, the XV rides well over poorer blacktop, maintaining its composure even over not so good country blacktop. Equally important, while there's decent resistance to body lean built into the suspension, the ride on 18-inch alloys wrapped in 225/55 Bridgestones is passenger-pleasingly composed.

Subaru's engineers have reached a fine compromise between the ride quality and the handling dynamics that keeps the XV entertaining to drive; crisp turn-in allied to nicely weighted steering and the well managed roll resistance, helped by a low centre of gravity (courtesy of the flatter-than-normal Boxer engine that allows for a low-down engine bay installation) plus permanent all-wheel drive, ensures a confident agility particularly on tricksy B-roads. The brakes (discs at every corner and vented at the front-end) are the reassuring kind you never notice because they just get on with their job without drawing attention to themselves, which is exactly how it should be.

Most crossovers rarely see the dirtier side of motoring, spending their entire lives running on blacktop. And that's because many of them can't really cut it off-road. Not so the XV — with its symmetrical all-wheel drive, no-nonsense X-Mode and 220mm of ground clearance, off-piste is somewhere the XV is happy to go.

Press the button to activate X-Mode and you can also call on Hill Descent Control to maintain a constant but safe speed when travelling downhill — just set an appropriate speed when approaching the hill and then remove your feet from the pedals to let HDC manage the brakes, leaving you free to concentrate on steering during the descent (should you need to, you can still adjust your speed).

All of which guarantees the XV is very well prepared to take adventurous drivers deeper into unmapped territory — unlike many of its less hardy crossover classmates that, when push comes to shove, are really crossovers in looks only.

Lift the head-friendly tailgate and retract the roller blind luggage cover and you'll find a regular shaped boot accessed through a wide opening that makes light work of loading 385 litres of luggage. Drop the easy-fold 60:40-split back seats (the rear belts, helpfully, stay well out of the way) and you'll triple that with a 1,290-litre loadbay with a seamless and level floor. Of course there are bag hooks plus some extra storage space beneath the boot floor, and if towing is your thing then the XV is good to haul a braked 1,400kg.

Scooby owners are a loyal bunch but given the number of drivers now racing to sign up to the mushrooming compact crossover movement, Subaru's off-road capable XV is likely to attract plenty of new customers with an active, outdoor lifestyle to the iconic Japanese brand. ~ MotorBar