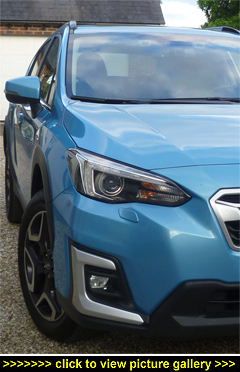 “Combining a family-friendly SUV-
crossover bodystyle with hybrid
power, Subaru’s sleekly rugged
XV e-Boxer is not just another
all-terrain pretender but is seriously
capable of playing hardball off-
road with the big boys...”

IF YOU HAVEN'T looked at new cars for a while you may still associate the Subaru brand with its World Rally-winning Imprezas. But while the sizzling tea-tray-bespoilered Scoobies have long gone to the great car park in the sky, their all-conquering essence lives on in the form of the symmetrical all-wheel drive system underpinning the Japanese brand's current line-up.

One of which is their compact XV crossover. Along with a contemporary style and some neat and well-executed SUV cues, it's got plenty of presence without being in-anybody's-face. Interestingly, during our week with it we had quite a number of people coming over for a closer (but socially-distanced!) look and verbally liking the XV — something that only usually happens with high-profile machinery such as an Audi R8 or a trendy all-new MINI model. Clearly, Subaru are doing a lot right!

Under the skin the other good news is that, unlike many similar-bodied but tarmac-restricted rivals, the XV's all-wheel drive set-up endows it with meaningful all-terrain ability. Broadening its appeal even further is the hybrid powertrain. Bottom line, what you get for your hybrid money is a 2.0-litre, unleaded-drinking, 148bhp/143lb ft horizontally-opposed, flat-four 'Boxer' engine tag-teamed with a 16bhp/49lb ft electric motor driving all four wheels through a CVT autobox. Top speed is a perfectly capable 120mph with the benchmark 0-62mph coming in at 10.7 seconds — an 'ample sufficiency' for today's Big-Brother-is-watching-you driving conditions.

Marking out the XV's contemporary cabin is a satisfying mix of easy-to-live-with ergonomics interwoven with quality materials; flamboyant touches include some unique copper-coloured detailing to the black leather seat upholstery and copper-finish carbon-fibre effect door and fascia finishing.

With eight-way power the driving position is easily set and fine-tuned electrically and both front seats offer a generous range of adjustability; visibility from behind the logically laid-out multifunction leather-rimmed wheel is superb all-round. Once you're moving you'll be quick to appreciate the supportive front seats with their effective light grey leather bolstering and two-stage heating, each set in a big bubble of personal space that includes a wide centre console with padded armrest and long outer armrests on the doors. The result is sure-fire comfort on all types of journeys, from popping out for a solo takeaway to a 200-mile family-inclusive trip.

True to it' family-orientated nature the XV provides decent in-cabin storage: siamesed cupholders that can accommodate cups of all sizes while keeping them steady with a lift out separator for dual-use, a slot for your mobile, a handy 'cave' at the base of the centre stack (with Aux jack, two USB ports and 12v power point), a large bin under the central armrest (with two more USB ports, one of which is a fast-charger), a pretty big glovebox, and bottle-holding door bins.

Infotainment and satellite navigation are ably served by an eight-inch touchscreen with integrated Android Auto and Apple CarPlay to support your smartphone. Hard buttons alongside the touchscreen offer fast menu jumps. A neat secondary screen top-dead-centre of the dash displays a raft of secondary information including the status of the adaptive cruise control and hybrid powertrain along with climate settings.

For the most important driving information (posted speed limit and digital current road speed readout) the driver's display behind the wheel incorporates a third 4.3-inch screen between the slim chrome bezels of the pair of white-on-dark-blue dials. All three screens have crystal clear graphics and figures that are easy to take in when driving, plus the navigation and mapping are utterly foolproof. You also get a CD player, DAB radio, Bluetooth, a voice recognition system, and a reversing camera.

The XV's body occupies a compact 4.5-metre stretch of tarmac and that's enough for it to provide roomy front and rear cabins. The back doors open to 90-degrees (and shut with a solid, well-engineered thunk) so entry and exit, helped by the higher hip-point you get in crossovers and SUVs, is über easy. There are damped roof grabs although your passengers are unlikely to need them when getting aboard; that said, lots of people seem to like strap-hanging on them while travelling!

Helped by a relaxing backrest angle and adequate headroom, space in the back is good. Decent knee- and foot-room means leg-stretching is on the menu even with six-footers occupying the front seats. Fold away the wide and well-padded drop-down central armrest and three can travel side-by-side. Storage-wise you'll find a pouch on the passenger seatback, twin cupholders in the main armrest, and large bottle-holding door bins. Long, deep windows ensure those in the back enjoy decent views out plus a valuable degree of confidentiality courtesy of dark-tinted glass from B-pillar to B-pillar.

The other essential that will satisfy not just your back-seat passengers but those up front too is the XV's smooth and unexpectedly — given its no-nonsense off-road skills-set — soothing ride. Without compromising the handling dynamics the all-independent suspension is soft enough to soak up bigger bumps and minimise the 'chatter' generated by badly pockmarked roads; and it's equally effective taking the sting out of the worst of off-road tracks.

The mild hybrid system is a good fit with the 2.0-litre petrol engine already found in non-hybrid XV models. The 'e' denotes the addition of a small electric motor and battery pack — but there's no plug-in recharging necessary because in addition to delivering some all-electric, engine-off, zero-emission driving at speeds up to 25mph, the petrol engine also charges the battery.

The e-motor contributes a useful extra 16bhp and 49lb ft meaning the hybrid powerplant gives your right foot command of a total output of 164bhp and 192lb ft. Around the houses the XV's powertrain is muted and you can run on pure EV in traffic using a light throttle. Press the accelerator pedal a bit harder and you'll invite the petrol engine to lend a hand — it joins the party fluently, injecting a hit of nippy acceleration from lower revs along with a likeable 'Boxer burble'.

The Lineartronic continuously variable transmission has six 'speeds' and comes with a manual mode and wheel-mounted paddle-shifters should you wish to assert more control. Most of the time, though, the easygoing autobox can be left to its own devices to make your driving as hassle-free as possible.

For those who measure everything by numbers, zero to 62mph takes 10.7 seconds and the top speed is 120mph. Officially, the average fuel consumption is 35.7mpg but a week of mixed (styles and routes) driving saw us record an honest 36.2mpg — perfectly acceptable given that the XV is not only a family-sized crossover but one fitted with an autobox and permanent all-wheel drive.

These days drivers of even of the most mundane cars expect their cars to 'handle'. However, no wishing is necessary with the XV because on the move it feels reassuringly grippy with well managed body control and precise, nicely weighted steering; throw in compact dimensions and excellent visibility and, fast or slow, placing it accurately is a doddle (good news for parking, too!). The regenerative brakes also deserve a mention — not only do they feed the battery pack but the vented discs front and rear provide strong linear stopping controlled by a natural-feeling pedal. Blessed with an easygoing character, the XV e-Boxer makes a very pleasing driving companion.

As already mentioned, the damping works well in ride terms but it also copes with rocky off-road terrain as easily as tarmacadam. With a class-leading 220mm of ground clearance, four-wheel traction plus an X-Mode drive setting that, at the push of a button, optimises engine, transmission, all-wheel drive, e-motor assistance (some extra low-down torque), brakes for maximum effectiveness on tricksy terrain. A Hill Descent Control also makes negotiating steep descents more predictable — all you need to do is steer and let the XV take you to the places many of its crossover rivals simply cannot.

As boots go the compact crossover XV's is, at 340 litres, par for the course and will swallow the average family's staycation luggage — it's a clean-sided, regular-shaped boot and courtesy of a high-lifting tailgate is very easy to load. The sill is set at a dog-friendly height; good news if Mr Pooch is coming too! Fold the 60:40-split rear backrests and you'll create a seamless, flat-floored loadbay that will hold as much as 1,173 litres of cargo. Naturally there are lashing eyelets and bag holders and a rollerblind load cover. Plus you can tow a braked 1,270kg.

Equally at home Mondays to Fridays on the school run as it is tackling Ben Nevis at the weekend, the XV e-Boxer is a capable and comfortable 'can do' crossover — for those with a yen to tackle challenging terrain, the all-wheel drive XV is the real McCoy. It's also satisfyingly undemanding to drive and a perfect example of why mid-size crossovers have taken over most of the automotive world. ~ MotorBar