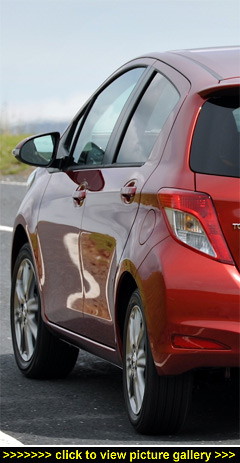 “The supermini-sized three- and
five-door hatchback Yaris is Toyota’s
best-selling model range in the UK.
And everything about the all-new one
adds up to a better car...”

THE ALL-NEW THIRD GENERATION YARIS range is just appearing in showrooms and the UK is the first country to receive the new French-built models. Prices start from Ł11,170 and rise to Ł15,385 with all versions showing a slight price increase (the best-selling version goes up by 2.3%) in line with it being an all-new model range and taking into account improved levels of refinement and specification.

Broadening the appeal in 2012 is the HSD 1.5-litre petrol/electric hybrid version but for the moment the new Yaris is available with uprated versions of the 68bhp 1.0-litre and 98bhp 1.33-litre petrol units and the 89bhp 1.4-litre diesel. The new Yaris range is offered with four trim levels: T2, TR, SR and T Spirit, with TR by far the most popular.

The average Yaris customer age in the UK has, in the past, been sixty years — but potential younger buyers should read on because the new range has a more youthful and sharper design and is also better equipped. For a start, the new models are 3.94 inches (100mm) longer and this has significantly improved rear legroom.

More good news is that, thanks to suspension changes, the ride is now far more comfortable. The fuel economy, too, has been improved — officially 52.3mpg in the Combined Cycle, my five-door, 1.33-litre 98bhp TR model recorded an impressive 50.3mpg carrying two passengers and covering all types of roads and traffic conditions.

This particular model costs Ł13,260 and is expected to be the best selling version. Tailpipe emissions are 123g/km, so road tax for the First Year is Ł0 and Ł95 per annum thereafter. For the record, an 8E insurance group rating also contributes to lower running costs. And company car drivers can expect to pay a low 15% Benefit-in-Kind tax.

When it comes to sell, trade-in values are also going to be better which in turn helps keep the monthly PCP repayments down and the minimum end-value up. CAP Monitor, one of the industry's residual value guides, estimates that the new Yaris models will retain between 39-42% of their value over three years or 30,000 miles. Yaris models specified with the new Toyota 'Touch and Go' SatNav and connected information and communications package will be quoted a residual value two points higher. A Ł500 extra-cost item, the Touch and Go system is being offered free of charge until the end of November 2011 — a valid incentive to buy early!

Essentially, the new model offers four fundamental and really good improvements over the outgoing Yaris. For a start, it looks much better; no more bland — the sharper styling lines of the new models project a much more youthful appearance. Inside, equipment levels have improved with a nice combination of different texture plastics for the fascia and door mouldings.

Secondly, at 3,885mm, the new model is longer yet still compact. This extra length has permitted an extra 100mm of interior space, most of its given to improving the rear seat leg space. Boot space, incidentally, is 286 litres.

Thirdly, suspension system changes have resulted in a far more compliant ride; it is really very comfortable and composed, with only really deep potholes unsettling the ride.

The steering, too, is sharper and more responsive with reasonable feedback to the driver. And parking this new Yaris is also easier, thanks to a smaller turning circle.

Fourthly, the 1.33-litre petrol engine is lively enough: top speed is 109mph and zero to 62mph takes 11.7 seconds. Okay, this isn't outstanding, but it's all that the majority of Yaris drivers will want or need.

The engine copes happily with high motorway speeds and it remains flexible and fuss-free in stop-start town traffic; only going up steep hills do you notice it's a third of a litre short of a 1.6. But the big plus about this revised engine is the excellent fuel economy: a genuine 50.3mpg on test, so this petrol engine makes sound financial sense and there's really no point in even higher mileage drivers spending the extra Ł1,500 on a 1.4-litre diesel.

Being a Toyota the Yaris will, of course, be reliable and durable and therefore desirable, but I think it will not just appeal to its traditional 'older' loyal buyers — young singles, couples and families will all find benefits in this notably improved model range.

However, even though the running costs are low, the pricing seems not as competitive as its mainstream rivals (Ford Fiesta, Vauxhall Corsa, Volkswagen Polo and some MINI models). So for many potential owners the decision to buy a Yaris will be a trade-off between a lower purchase price for some competitors versus the Toyota's lower running costs. As a tie-breaker, reconsider the four points I've noted; they're where I feel the new Yaris outscores not only the outgoing Yaris but the competition as well. — David Miles