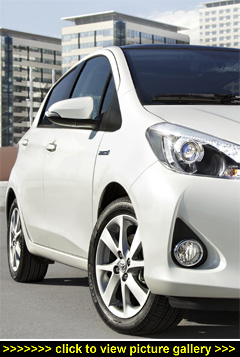 ARRIVING AS THE FLAGSHIP of Toyota's best-selling model series in Europe, the Yaris Hybrid features a scaled-down petrol-electric powertrain (an extensively revised 1.5-litre) with a smaller nickel hydride battery. It makes use of a new compact electric motor and generator which, jointly with the petrol engine, produces 98bhp and emits between 79 and 85g/km of CO2, depending on road wheel size.

Despite all the additional battery components, the five-door-only Yaris Hybrid has identical space for five occupants as the standard Yaris petrol and diesel models — plus the same 286-litre luggage capacity.

It also comes as standard with a continuously variable automatic transmission incorporating regenerative braking and fuel and emissions saving 'electric only' drive modes. In Britain, the Yaris Hybrid will be sold in the familiar Toyota trim levels: T3 (Ł14,995); the expected best-selling T4 (Ł15,895); and T Spirit (Ł16,995).

The zero-cost road tax Yaris Hybrid costs less to run in taxes and fuel and, compared to other manufacturer's 'eco' versions, which all carry a price premium over conventional petrol/diesel models, it's competitively priced. It's also between 10 and 44% cheaper to run than its 'eco' version key rivals from the Ford Fiesta, Honda Jazz, Vauxhall Corsa and VW Polo ranges.

And it's zero rated for the London Congestion Charge, so even if the congestion charge is changed to become zero rated only for cars emitting less than 85g/km (as has been suggested), the Yaris Hybrid T3 and T4 models will still be exempt.

Electro-tech peace of mind comes in the form of a 5-years/100,000 new car warranty that's extended to 8-years/100,000 for the hybrid system components — the battery itself is designed to last the lifetime of the car.

Toyota, not surprisingly, chose The Netherlands for the motoring media launch and test drive for the Yaris Hybrid as the Dutch are very pro-green energy and well known for their use of bicycles, clean and green transport and 'clean' power from nuclear and wind generating sources.

On the unchallenging flat Dutch roads, the Yaris Hybrid was in its element making use of the EV (electric only) running mode capability, serving up good ride comfort on the smooth level roads.

Its automatic CVT transmission, light steering, agile turning circle and smooth progressive brakes — aided by the regenerative braking as the drivetrain 'harvests' power to charge the battery — made Amsterdam city driving very easy, the Yaris proving very adept and agile negotiating the narrow streets. Equally impressive, it was very quiet, making it a peaceful environment to be in even when all around us was busy.

Okay, so the Yaris Hybrid is not going to set the road alight with its acceleration (zero to 62mph takes 11.8 seconds) but we were impressed with the way it kept up with traffic and it coped admirably with a motorway section outside the Dutch capital. Top speed, for the record, is 103mph.

This Yaris newcomer will be most useful for motorists who live and travel in suburbia. It's a great commuting car but also easily copes with longer journeys although on open fast cruising roads the Hybrid will use its conventional 1.5-litre petrol engine far more than its fuel-saving hybrid electric drive. In stop-go traffic conditions in towns and villages the electric motor seamlessly cuts in more often than any other full hybrid I have driven — around 44% of the time.

For older drivers and the less able, the wide-opening doors and big apertures ease entry and exit. The seats are large and well shaped, and the car's low waistline ensures excellent visibility.

Driving two differently specified models over two days and on a mixture of narrow but immaculately surfaced roads, I averaged 62mpg — almost 25% down on the official 80.7mpg Combined Cycle figure.

However, some colleagues pushed economy up to a high 78mpg by using the sophisticated EV modes at every opportunity. By comparison, the equivalent 1.33-litre petrol Yaris five-door officially returns around 51mpg.

On the styling front, the Yaris Hybrid has received minor tweaks — and the new deeper, lower grille sets it apart from the conventional Yaris models. And, being a Toyota, in five years' time the Yaris Hybrid will still look as modern and pristine as it did when I first drove it this week.

It also comes with 15-inch alloy wheels and these helped to give the Hybrid a compliant and comfortable ride; the larger 16-inch wheels for the T Spirit not only reduce the official fuel economy to 76.3mpg but, I suspect, will provide a harsher ride on our poor UK road surfaces.

Against? Some hard and cheap feeling interior plastic finishes, price premium over petrol-only Yaris models might be financially off-putting, and a noisy petrol engine under hard acceleration.

Apart from that, there really isn't much not to like about the Yaris Hybrid for most people, and the very low running and tax costs should claw back the higher purchase price over a few years' driving. It's not the most dynamic supermini hatch to drive, but in the right environment it will more than prove its worth. — David Miles