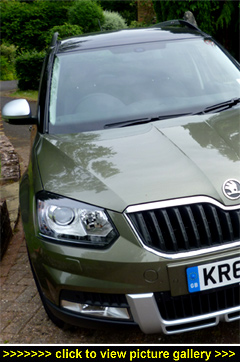 “The new Yeti’s name makes no
bones about what it’s designed for:
Outdoor. With desirable alternatives
scrabbling for your money from
Kia (Sportage), MINI (Countryman),
Nissan (Qashqai), Vauxhall (Mokka),
and VW (Tiguan), it might seem a
daunting choice. Until, that is, you
steer off the highway into the great
outdoors, where the Yeti’s all-wheel
drive puts it out front of the pack...”

ENSURING THAT IT CAN CUT IT not just in the urban jungle — where ordinary 2WD Yetis roam in great numbers — but in the wilderness, the Outdoor Yeti comes with a foolproof all-wheel drive system. It's also dressed for some bare-knuckle off-roading with front and rear bumpers optimised to enable steeper approach and departure angles and, if you specify the optional Rough Road package, some strategic underbody and running gear protection (almost as useful for the worsening potholes on regular roads).

Let's not waste time mincing words: the Outdoor Yeti is the real McCoy and as such is impressively capable off-road — to the degree that many drivers, just like Range Rover owners, will probably never come close to making the most of its abilities.

Press the 'Off-Road' (4x4) button on the dash and the Outdoor will eagerly get to grips with everything from slickly muddied, flooded, and treacherously white-dusted winter blacktop, to white-knuckle off-road conditions.

Best of all, the only thing Outdoor drivers need (after pressing the 4x4 button) is some common sense and the ability to steer — off-road, the Yeti's new, faster-acting 4x4 system will do the rest and when activated it's supported by a number of driving aids as well as enhanced traction features that, for instance, maintain a constant speed downhill on a steep slope and prevent over-revving of the engine to take the 'fear factor' out of descending steep and tricky gradients, as well as off-road grade ABS braking and anti-slip off-road traction control for maximum grip.

Something else you can't have too much of when driving off-road is visibility. The Yeti comes up trumps here too; its large windows and high-set seating ensure excellent all-round views and means you know where all four corners and the nose and tail end without side-swiping a tree or banging into a large rock (expensively too late!) to find out.

Most of the time on-road the Yeti's four-wheel drive system sends virtually all (96%) of the driving torque to the front pair of wheels. However, when necessary this redistributes the drive automatically, shunting up to 50% to the rear; in snow or off-road it will, in extremis, send 85% to just one wheel if conditions are so bad that the other three have lost all grip.

Thanks to all the 4x4 drivetrain's hidden electronic traction tech and the torquey turbodiesel under the bonnet, the Outdoor feels indomitable at the low, punch-your-way-through speeds needed for tackling almost all off-road conditions.

On the tarmac the responsive and smooth-revving four-pot 2.0 TDI's healthy supply of torque (236lb ft from 1,750rpm) combined with the DSG auto 'box guarantees reassuring overtaking. Getting to the benchmark 62mph from standstill takes just 10.2 seconds and it runs up to 116mph. Officially, the fuel consumption is 44.8mpg but a week's mixed driving saw an impressive 47.8mpg on the trip computer. For the record the official touring figure is 51.4 with urban given as 37.7mpg.

The DSG's changes — both up and down — are smooth-and-snappy (and you can, of course, use the sequential shift mode to take full control of the change points whenever you wish). Add in steering that's nicely weighted with neat turn-in that lets you enjoy its agility as the speed builds out on the open road, feelsome grip, decent body control, and progressive brakes, and you have the recipe for real driver appeal and an engaging drive.

At speed the Yeti Outdoor feels reassuringly rock steady; add in a decent ride and an easygoing gait that shrinks long motorway journeys and it makes for a fine all-rounder that will satisfy all the family as well as the designated driver.

Getting aboard is easy through big doors (but not so big as to be a problem in car parks). Once inside, you'll find masses of headroom and loads of leg room in whichever of the five leather trimmed seats you occupy. The well-shaped front chairs are supportive, with three-stage heating, height-adjustable belts and comfortable headrests.

The driving position is spot-on, with an uninterrupted view to the end of the bonnet. Instrumentation is crystal clear; switchgear logically sited and having that crisp Germanic action that says quality. Dual-zone AirCon pushes out a refreshing stream of chilled air for those muggy British summers. More good news: the glovebox is also cooled.

You also get privacy glass from the B-pillars back, rear parking sensors, seven airbags (with one for the driver's knee), electronic stability control, hill hold, 17-inch alloys, LED daytime running lights, bi-Xenon headlights with cornering function as well as cornering front fog lights. And plenty of storage space and cubbies including a handy lidded bin built-into the top of the dash, a 'secret' storage box under the front passenger seat, and a drop-down overhead sunglasses case.

As a family holdall the 4.2-metre long Yeti is deceptively accommodating. The shapely 'hip-to-be-square' body hints at the room inside but even so you're not expecting so much versatility. The rear cabin is as well finished as the front with the added benefit of seats set six inches higher so views out for rear passengers are panoramic. Rear comfort is further boosted by dedicated air vents and reclining backrests that offer a wide range of settings from upright to laid-back.

Swing up the full-width tailgate and there's excellent access to the load bay. If the rear seats are in use there's 416 litres for luggage or cargo; slide the rear seats forward (approximately five inches) and the boot expands even more. Going one step further and folding the seats creates a 1,580-litre flat-floored cargo bay.

For those times when you need every available inch you can remove all three rear seats, which gives you a pretty massive 1,760 litres. Under the boor floor there's even more space with two big, deep bins. And if that's still not enough, the Outdoor will pull a braked 2,100kg.

An optional (Ł258) bike carrier allows two bikes to be secured inside the car. And if you want to take your Scooby Doo for a walkabout in the woods, don't worry about dirtying the boot carpet — a reversible mat is available for Ł48 with a waterproof, wipe-clean surface for messy work.

Other variations of the standard-fit Varioflex seating system, in addition to being able to slide the outer back seats lengthways, include removing the centre rear seat and sliding the outer two in towards the centre (by 80mm) for a dedicated two-seater layout. In all, over twenty different seating arrangements are possible.

A versatile and roomy family battlewagon that ticks every box for today's hard-pressed drivers, the new Outdoor version takes the Yeti to the next level. Easy to drive and a pleasure to live with, it's definitely a case of Yeti's the name, outdoors is the game! — MotorBar