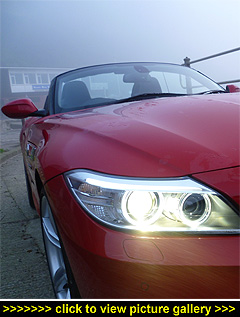 “BMW’s Z4 ‘roadster’ sports a
refreshingly short name — great
news when asked what you drive.
So it’s only right that it deserves
a succinct tag to convey its
sporting character when the
inevitable question comes up —
‘How does she go, mister?’
After a week behind the wheel of
the 306bhp sDrive 35i, we decided
RFHD might be appropriate:
Right Foot Hard Down...”

BECAUSE, AS IS OBVIOUS from its hunkered- down, ready-to-pounce stance, this classic rear-wheel drive sports car from BMW is not just willing but pro-actively eager to be driven hard.

The twin-turboed, direct injection straight-six petrol engine under the bonnet puts out a compelling 306bhp alongside muscular low-end torque (295lb ft at 1,300rpm) accompanied by a well-matched soundtrack — drive with some brio and you'll catch yourself nodding affirmatively at the hard-edged growl and vocal exhaust note that swells agreeably as the needle races towards the red-line.

It's a fine powerplant; turbine smooth and lag-free, delivering its power across a broad band and compressing the zero to 62mph sprint to a seamless 5.1-second lunge; whatever speed you're doing, floor the accelerator and you'll feel the torque shove you relentlessly towards the Z4's 155mph maximum.

The seven-speed dual-clutch sport automatic is well matched to the turboed-six — changes are smooth and come instantly whether you're in auto or manual, or going up or down the numbers using the wheel-mounted paddle-shifters.

They're also great for dropping several gears setting up for a corner or calling up some tactical engine braking. Reassuring to know, too, that there's automatic downshift protection that prevents a 'wrong' gear selection in both auto and manual modes.

For the Justin Biebers there's a launch control but the real fun is not 'cheating' on the straight-line 0-62mph routine but finger-flicking up and down the 'box using the paddles and rocketing away when you're already moving at a fair lick — and not just on the straight and narrow.

A word to the wise; whenever you do stamp the power pedal don't forget, unless you're on a trackday jaunt, to lift off soon after or you'll quickly find yourself flying along at near three-figure speeds — after which you likely won't be passing 'Go' any more and will, quite likely, also be paying a three-figure fine...

The Z4 range is fresh from a facelift although you'll need to be hawk-eyed to spot the differences — styling tweaks include sharper-looking bumpers, a sleeker grille, and a set of revised brazen-white LED headlights. At the same time, for those enthusiasts whose aspirations are bigger than their budgets, BMW also introduced a new entry-level Z4 — the Ł27,735 18i.

What hasn't changed is the Z4's smartly-fettled long-nose-short-tail body — the lines are the kind that you won't tire of looking at, and all the better for the serious attention to detail and fine build quality.

Nice too, is the underlying hint of a 'trad' sports car (squint and you can imagine the graceful ghost of a Healey 3000 — well, we could).

However, for those lucky enough to get the biggest Z4 bang for their bucks, a 3.0-litre Z4 is definitely the way to go (for the record, the 306bhp 35i tested here is the penultimate model; the range-topping 35is is even more powerful with 340bhp).

Dynamically it's a classically-configured sports car that's entertaining to drive and its rear-wheel drive offers hands-on drivers a lot more adjustability than any front-wheel model ever could — absolutely what keen driving enthusiasts crave.

You sit close to the ground and the weight distribution is a democratic 50:50 front to rear. Given its keen balance, effective grip and quick turn-in, a hardcore driving style isn't at all necessary to have some fun. Slow or fast, it feels agile and, punched through a snaking run of twists and turns, dynamically it hangs together very nicely.

Drive Performance Control is standard-fit on the 35i M Sport, giving the driver the choice between three dynamic driving modes: Comfort, Sport and Sport+. Sport and Sport+ tighten up the Z4 (with Sport+ also giving the stability control a time-out) when you're hard-charging — the price you pay is a pretty firm, although never harsh, ride.

Comfort, though, does swing the scale back towards the grand-tourer side of things. Generally, so long as you avoid potholes (which, thanks to very low-pro 255/30 rubber and a sports suspension, will definitely give you a jolt), the Z4 rides well.

The 35i's cabin is striking — likeable not only for its well-crafted appearance and build quality, but also for the distinctive fascia with its classic-look rotary dials and 'striped' carbon pattern brushed satin aluminium trim.

Drop into the sports seat for the first time and spend a few enjoyable minutes power-adjusting to achieve your ideal driving position: the headrests are integral and boost shoulder support; there's ten-way seat movement; the seat front extends for extra under-thigh support; and the seatback bolsters can be closed in or opened out (electrically, of course) for that perfect body-hugging 'pinch'… then it's just a press of one of the two memory buttons to save your personalised settings.

One of our road-test team suffers from a seriously bad back — travelling in the equally multi-adjustable passenger seat (both seats, incidentally, also benefit from three-stage heating) she found, even driven along twisty country lanes, that it stopped the pain.

Roof raised, visibility out is fine, including to the rear, and placing the wieldy, compactly-proportioned Z4 on the blacktop is never a problem. Roof-down it's a breeze.

The large display screen serves the full infotainment package, from 3D SatNav to audio, parking schematics, etc. It slides out and up from the fascia and when you don't need it, just tap it and it retreats silently from whence it came.

Safety items include all the de rigueur traction and stability driver aids as well as run-flat tyres along with protective rollover hoops and a host of airbags, including a pair in the seat headrests specifically designed to keep you safe in the event of a side-shunt.

When our Z4 was delivered we were in the middle of an extended Christmas and New Year break that had taken us on a four-wheeled round-robin visiting friends scattered across the South-East. We'd arrived at our current destination in a MINI Paceman with its boot and rear cabin packed tight with two sets of luggage.

The shock came a few days after the Z4 arrived and our Paceman had gone back. One look at the Z4's boot and we were worried — one of the party travels like an old-style Hollywood starlet!

And dedicated two-seater roadsters aren't usually hot on practicality. However, with the divider that ring-fences the space for the Z4's hardtop to fold into the boot pushed back, there's actually far more room that you'd think.

However, with four fairly large hold-alls taking up the centre of the Z4's boot, some juggling saw everything we'd previously fitted into the Paceman all neatly accommodated. Admittedly that meant driving roof-up because with the top retracted, boot space goes down from 310 to 180 litres. Nevertheless, an unexpectedly good result.

Truth to tell, while it is highly entertaining, right foot hard down isn't the only way to drive a 3.0-litre Z4. Press the switch to engage Comfort mode and laid-back long-distance is what it does. Even rolling on the optional 19-inch alloys shod with rubber-band profile Bridgestones, the 35i is a genial cruiser that's relaxing at three-figure autobahn speeds.

This latest version of the Z4 offers more of the same, only better; more style, more gratifying to drive and deliciously more intense. — MotorBar