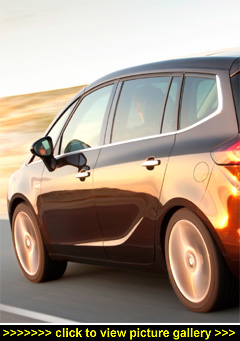 The curvaceous new Tourer is longer, wider, better equipped, more stylish and more expensive — and wears a 'Tourer' badge to differentiate it from the plainer, and older, Zafira which continues on sale but with a reduced model line-up and less engine and trim options.

Putting a new Zafira Tourer on your drive (available from March 2012 but you can order now) will cost between Ł21,000 and Ł28,465. It may take you a while to decide which one — there are thirty-one different models to pick from. Reviewed here is the best-selling 128bhp (130PS) 2.0 turbodiesel Exclusiv version with ecoFLEX start/stop. Officially it will return 62.8mpg in the Combined Cycle, has low tailpipe emissions of 119g/km and costs Ł23,950.

Other engine choices are 1.4 turboed or 1.8-litre normally aspirated petrol engines, both with 138bhp, and three 2.0-litre turbodiesels (108, 128 and 162bhp). For an extra Ł1,000 you can have a six-speed automatic on the 1.4 turboed petrol engine and also on the 162bhp diesel. Trim levels are ES, the best-selling Exclusiv, the sporty SRi, SE and Elite.

People carriers are all about clever packaging: versatile seating and load carrying, and lots of storage. And the new Tourer obliges. It measures 4,658mm from nose to tail — almost 200mm longer than the standard Zafira. It's also marginally wider and taller, too.

The seven-seater Zafira Tourer's boot space is minimal (enough for a bit of shopping) if all three rows of seats are in use. However, fold the rearmost pair of seats for a five-seat configuration and the boot space jumps to a very accommodating 710 litres; go further and fold both the second and third rows and you'll have a huge 1,860 litres to fill. In addition, there are numerous storage compartments spread around the interior.

Conventional hinged side rear doors provide access to the second and third rows of seats — no sliding doors for this newcomer, which is a shame as today's narrow parking spaces almost demand them. Getting to the rearmost row of seats is not a problem although once there legroom is not so generous but headroom should be okay for sub-six-footers.

Once aboard, the overall look and feel of the Tourer's cabin is noticeably a grade or two up from the smaller Zafira. It's roomier, light and airy and has the ambience of a large executive family car. There's even more versatility as well as a high degree of luxury for driver and passengers, making it a particularly good choice for families with older children or for those who want the refinement and luxury of an executive car combined with generous load-carrying abilities.

Vauxhall's Flex7 seating system is one the Tourer's key selling (and talking) points. Both the Tourer's third row seats can be folded down flush with the floor of the luggage compartment but whereas the ordinary Zafira makes do with a bench seat for its middle row, the Tourer is fitted with three individual second row seats that can individually slide length-wise by 210mm (100mm forwards; 110mm rearwards). They also fold fully flat to create an even loadbay floor.

Even better, their backrests can be reclined through four different positions. And thanks to easy-to-reach loop handles, all coloured-coded for easy differentiation (red to fold down; black to pull upright), the second row seat backs can be fully folded in one simple movement without having to remove seat sections or headrests.

While on the subject of seats, the new Tourer will also offer a Lounge Seating system. Standard on the top two trim levels, this provides second-row passengers with the kind of seating space usually found in a large executive saloon.

Lounge Seating transforms the three second row seats into two comfortable seats with plenty of extra legroom and shoulder space — the outer seats slide up to 280mm backwards (70mm more than in the standard version and a best-in-class dimension) and then slide 50mm towards the centre of the cabin. A clever and easy-to-operate folding / rotating mechanism then turns the back of the middle seat into comfortable armrests for the passengers in the outer seats. Vauxhall/Opel has filed for a patent for this system, which is unique in the industry.

But the Tourer's not all about rear passenger comfort. The front passenger and driver will appreciate the large, comfortable, and very supportive front seats that come with a good range of a fore and aft adjustment. The twin but slim A-pillars and deep windscreen make it light and airy and, courtesy of the large side windows and large door-mounted mirrors, the driver's visibility is further improved.

Other well-considered touches include the optional foldable and space-saving luggage compartment FlexCover — this can be stored in the rear and creates a level load floor and also protects the backs of the seats from dirt.

However, making this an extra cost option is a bit mean and it should really be fitted as standard. Also, and first seen in the Meriva, Vauxhall's innovative FlexRail centre console has been further enhanced to provide a modular three-level storage system.

There are numerous tempting extra-cost options available including an upgraded SatNav with traffic alert (Ł855), front and rear parking sensors (Ł385), Bluetooth (Ł220), and Vauxhall's FlexRide adjustable damping system (Ł790). FlexRide is usually needed on most Vauxhall models fitted with larger than standard wheels to smooth out the ride. That noted, on its standard 17-inch wheels the Tourer coped pretty well without it on our poor road surfaces.

The electronic power steering has been tuned differently (from the European settings) for the UK market. Its modified 'mapping' has reduced the strong self-centring characteristic to better suit our winding roads, allowing for more road feel to be dialled into the system with more speed related weight added to the steering the faster the car is driven.

So far as handling, steering feedback and ride comfort goes, the new Zafira Tourer in Exclusiv spec can't really be faulted — it drives like a high quality saloon or an estate with little body roll, it's very comfortable and the handling is precise. Be warned, though, that should you specify the larger 18-inch wheels the ride does become choppy and fidgety and the FlexRide damping system option box should be ticked.

For most drivers the 130PS turbodiesel with the ecoFLEX start/stop function will be the most sensible choice — all its figures stack up for good fuel economy and low taxes.

Officially, this unit will return 62.8mpg in the Combined Cycle — my test drive, over winding country lanes as well as busy A-roads, saw an impressive 50.9mpg. Still way below the official figure, but pretty acceptable.

One of the good reasons for choosing the ecoFLEX is because the tailpipe emissions are really very low for this size of vehicle — just 119g/km. This means zero cost First Year road tax and then only Ł30 per year after that. Company car drivers will also benefit due to the 13% BIK tax.

Maximum speed is 120mph with nought to 62mph in a competitive 10.6 seconds. The 128bhp engine is pretty responsive although full use needs to be made of the six-speed manual 'box at midrange speeds because both fifth and sixth are overdrive gears.

My only reservation is that it's not as roomy in the rearmost third row as larger MPVs such as the Volkswagen Sharan or Ford S-Max. In fact, it's a bit like buying off-the-peg clothes: size-wise the Tourer falls somewhere between medium and large. But if it fits, go ahead and buy one! — David Miles