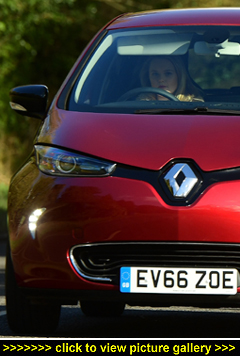 “Dieselgate and the demonising
of diesel-powered cars due to their
higher Nitrous Oxide emissions
has got many drivers thinking
favourably about the alternative —
electric-powered cars and their
much-improved driving ranges...”

WITH THE PRICE OF FUEL, both petrol and diesel, increasing at a rapid rate, electric-powered car sales should continue to charge along.

That said, electric cars still cost more to buy than conventional combustion engine or hybrid vehicles so it's still not an obvious choice to go all-electric. But if you're thinking about it, a good place to start could be Renault's new Zoe R90 Z.E. 40.

A five-door, supermini-sized hatchback, the Zoe is the UK's third best-selling all-electric passenger car behind the top-selling Nissan Leaf and the specialist sports Tesla models.

Zoe customers range from younger technophobes through to environmentalists but the majority buy it for its super-low running costs — a Zoe costs around two-pence per mile to run, and a full charge using a domestic electric supply will cost between Ł3.50 and Ł4. For public charging points the costs varies from free to around Ł12 at motorway service stations.

Now included in its revised line-up are the R90 Z.E. 40 models which Renault claim have a driving range of up to 250 miles on a full charge and offer "the greatest range of any mainstream electric vehicle".

However, Renault also admits that the new Z.E. 41kW battery has a real-life range of between 186 miles (in temperate conditions) and 124-miles (in extreme cold conditions).

Prices start from Ł13,995 for the 22kW Expression Nav and rise to Ł20,645 for the additional new Signature Nav Z.E. 40 version. Take note, though, that although these prices include the Government's Plug-In Vehicle Grant they do not include the monthly battery lease costs which range from Ł49 to Ł110 per month. Buying the Zoe outright with its battery ups the price considerably: to Ł25,495 for the R90 Z.E. 40 Signature Nav.

That said, nine out of ten UK Zoe customers choose the battery lease option because of the lifetime warranty replacement this provides even though the battery is covered under the standard warranty for eight years and 100,000 miles.

So, apart from new pricing and a higher-powered battery pack for a longer driving range, what else is new for the 2017 model year Zoes?

In addition to the Z.E. Connect app, the Dynamique Nav also benefits from a one-year subscription to the Z.E. Interactive app which, via a smartphone or computer, allows you to remotely charge your Zoe (as well as schedule charges and also pre-set the cabin temperature) in order to maximise convenience and take advantage of available off-peak electricity rates.

Being all-electric, the Zoe comes with an easy-to-drive single-forward-speed-plus-reverse automatic transmission. As for performance, with 162lb ft of torque from the electric motor on tap from just 250rpm, acceleration is immediate — perfect for silent, nippy in-town travel and pulling out at busy road junctions.

On the open road that initial burst of performance quickly levels out, with all models having a zero to 62mph acceleration time of 13.5 seconds and a top speed of just 84mph — still over the UK's legal top speed. Going up hills marginally drags down speed and uses more battery power.

The ride is well balanced and generally comfortable but with its extra weight the Zoe is not as agile at the Renault Clio supermini-sized hatchback which uses the same platform.

And therein lies the issue — Is it better to buy a new petrol-powered Renault Clio for less money, with better performance and no driving range anxiety, and to pay a bit more for road tax, or do you opt for a Zoe?

If you use your car predominately for city or town driving it still has to be the Zoe 22kW model; but if you do occasionally undertake a longer trip or want to make more short journeys between charge-ups then the new 41kW version is the better choice.

It's all about horses for courses and perhaps the horsepower offered by a petrol-engined, fuel-efficient new Clio is still the better all-round bet.

As an example, we recently tried a new mid-range, five-door Clio — the Dynamique S Nav TCe 90 turbocharged three-cylinder 898cc petrol model which costs Ł16,265 (although other petrol versions start from just under Ł12,000).

Our test Clio had comparable specification to the Zoe and will officially return 60.1mpg in the Combined Cycle; on the same town-and-country test route we used for the Zoe it recorded exactly 50mpg. Top speed is 113mph and zero to 62mph takes 12.2 seconds. The CO2 emissions are 105g/km so you pay nothing for the First Year road tax and then just Ł20 annually from Year Two. Plus the warranty is the same as the Zoe's: four years and 100,000 miles.

It's make your mind-up time — for me it would be the Clio petrol model: it's more involving to drive with less fuss and time required to refuel it with no driving range issues, and it's cheaper to buy. But for some folks, zero emissions can do no wrong! ~ David Miles