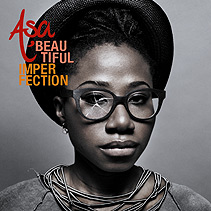 BEAUTIFUL, YES; IMPERFECT, NO WAY. That's Asa's delicious new album Beautiful Imperfection that proves Asa is more than just a one-hit wonder and her delivery is as flawless as ever.

Professional throughout, Asa draws from the music that was so much a part of her childhood. Michael Jackson, Bob Marley, Lauryn Hill and Fela Kuti all figured very much in forming the inimitable sound of Asa, along with the music of her homeland.

Born in Paris, Asa returned to her family's home in Lagos, Nigeria, at the age of two. As the only girl in a family of four, living in an African city that was both vibrant and turbulent, young Asa often sought solace in her thoughts.

With dreams of musical stardom, Asa's vivid imagination led her to follow in the footsteps of generations of teenagers passionate about music. She would conjure up an imaginary stage complete with microphone; and in her mind's eye she could see herself performing in front of an audience.

Determination and ambition drove Asa to sign herself up to a music school when she was 18. She learned to play the guitar and developed her own sound with songs in both English and Yoruba that combined a successful fusion of contemporary soul, pop, reggae and funk into a winning formula to complement her strong vocals and soul-stirring melodies. Once her sound was defined, Asa returned to France to cut her teeth on the Parisian music scene.

Renowned for fusing her Nigerian roots with contemporary soulful pop on her internationally-acclaimed self-titled debut album, Asa proved herself to be an intelligent and socially-conscious individual who used her musical talents to address social and political issues.

Spawning the hit songs Jailer and Fire On The Mountain, Asa's debut album — Asa — met recognition worldwide. It was supported by an extended tour that included Europe, North America, Africa and Japan. Support has come from such musical greats as Lenny Kravitz and Angelique Kidjo, who invited her to perform duets on various occasions.

This ever-evolving songstress has another goal to reach with her second studio release. She says: "The first album reflected my state of mind then. I had a lot to talk about — social and political issues. This time, I felt different: I wanted to create something that would help people come out of sad moods and feel uplifted. It is different from the first album; it has more brightness."

Beautiful Imperfection is, quite simply, a beautiful record. The finest melodies of Beautiful Imperfection combine with Asa's warm, stunning vocals that evoke the mystique and heartbeat of darkest Africa. The lively, inspirational track Be My Man is fabulous Soul with a capital S (due to be released as a single on 14 March 2011) and is heralded as a fine slice of irresistible soul-snapping retro-groove that recalls Osibisa and a rock-tinge inspired by The Clash, all well-controlled by an astonishingly self-assured vocal turn.

Asa's voice soars before becoming low and seductive with a distinctive and enchanting lilt. You can sense Asa's heart, her life-blood and her soul — French chic meets African mystique. Why Can't We is fantastic; the pouting, sultry Preacher Man enticing and the quirkily cute Bimpé and Oré lift your spirits.

The lovely, heartfelt Dreamer Girl is sung so prettily and is especially pertinent to Asa. She explains: "When you catch yourself dreaming, you can sometimes sense that people nearby could hear you, and suddenly, you might feel like it's a crime. But I'm actually the dreamer girl in that song."

Asa produces charming melodies with great beats exuding happiness for this lovely album. Just listen to Broda Olé and Questions. Beautiful Imperfection confirms Asa's place as a natural and talented singer — so how can you find fault with something that is so Beautifully Perfect?

"Definitely one to watch" — Uncut

"A new and perfectly unique talent" — The Sun SFTW 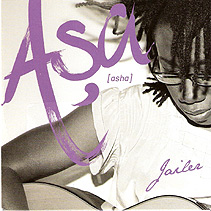 “The sunny-voiced Asa makes a
welcome return with her stunning
melodies full of the spirit of her home
country, Africa, releasing her hot
new single with Reggae vibrations:
Jailer — taken from the self-titled
album that was tipped as one of the
albums of 2008 on its release in
February...”

STRONG, GORGEOUS VOCALS THAT reach the places you didn't even know you had — that's Asa, her songs portraying a love of her homeland that she wants to share with the world. If you haven't heard her sing, then here is your cue: Asa's hot new single, Jailer, is available now (released 12 May, 2008) and is a lilting 'Afro Folk' track with Reggae vibrations, taken from her critically-acclaimed, self-titled album.

The charming and striking Asa is pleasantly addictive; her words unbelievably touching.
Her dancing instrumentals and poignant lyrics are full of the freedom and spirit of Africa — Africa's pulse is echoed in the beat of Asa's songs. Who wouldn't long for the beautiful, secret spiritual homeland that only native Africans like Asa will ever know?

Here is the authentic black music cited by many as an inspiration — and although dripping with traditional African sounds, 25-year-old Asa's songs are perfect for today. Her lyrics often convey a world that most westerners could only dare to imagine, alongside the usual themes of love and relationship that are a feature of much modern pop music. 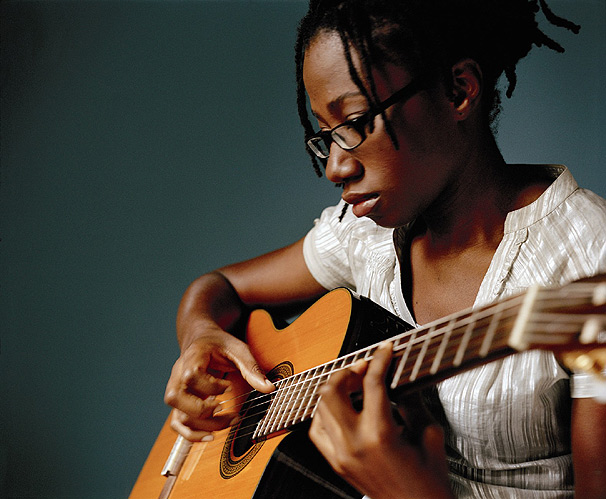 To say that Asa's music is unique is somewhat trite as the U-word is much over-used. Nevertheless, it is truly unique and as the publicity machine says: Jailer observes the constraints of society, encouraging the ability to break free of restrictions that we can all be faced with. This song is proof of the transferability of Asa's subject matter and its aspirational qualities, targeting those who do not appreciate the fortunes that life offers. Asa's music resounds with optimism. She says: "my music is about hope, and a positive revolution."

Asa, the album, comprises songs in both English and Yoruban. Even if you don't understand the words, the musical arrangement and the breathtaking quality of Asa's voice gives you an almost instinctive awareness of the essence of her songs.

Asa has already been tipped by Echoes The Voice, Pride, guardian.co.uk and Music Week and with strong support from both Radio 2 and 1Xtra, Asa made her first television appearance on Later With Jools in February. In May she appeared at two of the country's most popular venues — Islington Academy, London, and Club Academy, Manchester.

"Strong, gorgeous vocals that reach the places you didn't even know you had — that's Asa, her songs portraying a love of her homeland that she wants to share with the world… Africa's pulse is echoed in the beat of Asa's songs" — Maggie Woods, MotorBar

"Definitely one to watch" — Uncut

"So lovely… so achingly pretty…" — guardian.co.uk/music 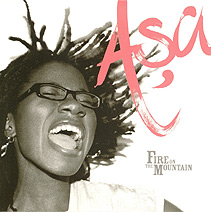 “Asa’s style of African storytelling
crooning melds pop, r&b, funk, soul,
world and soft reggae into an African
dream of open country against a
backdrop of mountain tops and hills
rolling down to deserted beaches
with gentle, warm breezes...”

I HAVE NEVER BEEN TO AFRICA but Asa's self-titled album made me feel close to the land. There is something charmingly naďve about her delivery. She sounds unspoilt and enigmatic. Her new album, simply Asa, released on 18 February 2008, is tipped as one of the albums of the year.

Having grown up in Nigeria on an audible diet of an intricately diverse mixture of African music and some of the best known and loved artists from the West, Asa (prounced 'Asha') has a sound that is as perfectly unique as she is herself. No attempt to put it into an existing category would succeed. She is a one-off; an individual character who never allows herself to be constrained by anything.

Asa is one of those free spirits who needs to be left to explore herself and develop her talent and the result is this collection of songs which is as idiosyncratic, underground and niche as it is full of spectacular commercial appeal and beautiful melody. How does she sing those notes that so rapidly flick off her tongue as she slips easily onto the next one? 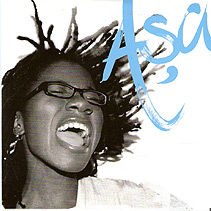 Her commercial appeal is almost by accident. She sings in both English and Yoruba with, says the publicity machine, a feel and emotion in the vocal delivery enabling a subconscious interpretation of the Yoruban lyrics. With themes than include Asa's anger at the indifference of the modern world. Jailer, one of our favourites, is a morality tale denouncing slavery in all its forms. Asa's platform, we are told, for us to hear how she feels about the world and herself in today's society.

The publicity machine goes on: "When combined with 21st Century love songs such as Subway and Bi'Banke, which take an original and insightful approach to love, the album ties the themes of personal strength and the powers of thought with sensitivity, wisdom and rebellion to create the unquantifiable but impossible brilliance of Asa.

"When layered with the instrumentation and arrangements that combine elegant strings, perfectly placed drums, percussion and guitar along with the Hammond organ, the aural vision created is a stunning reminder that cultural fusion can create the most impressive art with the broadest appeal to bring together people from all over the world.

"The buzz that is already sweeping France has crossed the Channel and, having already made it onto the Music Week playlist, the barometer of future success is already swinging in Asa's favour with the tastemakers clamouring over one another to be first at Dramatico's door." 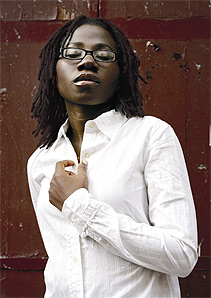 Now that, after a challenging voyage, Asa has finally come to the attention of the wider world, she is philosophical about her journey so far: "I want my music to touch people. As an African, I want to give hope back to my people, but also to speak in their name. I want to show the world that something beautiful and positive can come out of the black continent and inspire young people all over the world." Congratulations, Asa — here it is!

"Lagos is the New York of Nigeria. If you want to get anywhere in music as a Nigerian artiste, that's where you'll find the best opportunities, as well as the worst pitfalls."

That sounds ominous and she will not be drawn on the pitfalls, but she has had a number of well-deserved opportunities, including being approached by MTV to take the role of ambassador for Africa. This led her to open for — among others — Akon, John Legend, Beyoncé and Snoop Dogg.

Her single Fire On The Mountain (from the album) is another favourite of ours and comes with a hint of the Caribbean in its slow, indulgent beat. It had us clicking our fingers and I wanted to kick off my shoes…