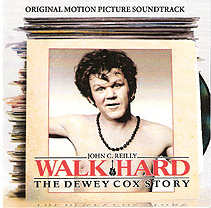 “Slip back to the Seventies and lose
yourself in Walk Hard: The Dewey Cox
Story — the original motion picture
soundtrack from the amazingly-
entertaining film of the same name...”

TYPICAL OF THE SOUND OF THE SEVENTIES and beyond, the soundtrack of Walk Hard: The Dewey Cox Story is a marvellous blast from the past and is all the more poignant if you have seen the film.

From the comedic minds of Judd Apatow (Talladega Nights, The Ballad of Ricky Bobby, Anchorman, The Legend of Ron Burgundy) and director Jake Kasdan, a new music legend in Dewey Cox is born and now, for the first time ever, the songs of Cox's fabled career are brought together on one album. The soundtrack features a sampling of Dewey Cox's greatest hits, spanning over five decades of his musical history.

Once Apatow and Kasdan had conceived the ideas for a lifetime's worth of songs, album producer Michael Andrews tapped some of America's top tunesmiths, including Van Dyke Parks, Dan Bern, Mike Viola, Charlie Wadhams, Antonio Ortiz and Marshal Crenshaw, to write the new classics. All fifteen songs are performed delightfully by the Academy Award-nominated actor John C Reilly as Dewey Cox.

Featured on the soundtrack that every Cox-hound must own are fifteen of his original songs, including Walk Hard, the country-flavoured hit that made him a star, the sexually suggestive Let's Duet, the twangy Guilty As Charged, the emotional ballad A Life Without You (Is No Life At All) and the touching and poignant protest song Let Me Hold You (Little Man). In addition to the Cox-penned classics, also included is the heart-wrenching lounge-disco interpretation of David Bowie's Starman.

This winter, expect everyone to rock like Cox! Columbia Pictures' new comedy, Walk Hard: The Dewey Cox Story, was in cinemas from January (2008). John C Reilly stars as the larger than life legendary musician and songwriter Dewey Cox. But behind the music is the undulating story of a musician whose songs would change a nation. On his Rock 'n' Roll spiral, Cox sleeps with 411 women, marries three times, has 22 children and 14 stepchildren, stars in his own Seventies television variety show, collects friends ranging from Elvis to the Beatles to a chimp, and gets addicted to (and then kicks) every drug known to man.

Despite all of this, Cox grows into a national icon and eventually earns the love of a good woman — long-time backup singer Darlene (Jenna Fischer). The film also stars Tim Meadows and Kristen Wiig.

Check out www.walkhard-movie.com and MotorBar's review of the movie Walk Hard: The Dewey Cox Story, out now on DVD.

Check out the highly-amusing interview with Dewey Cox at RollingStone.com.