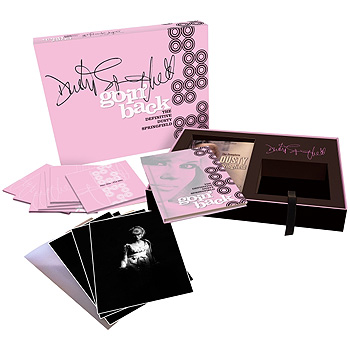 “The world would have
been a sadder place not
to have experienced the
stunning vocals of one
of the UK’s best female
singers ever to have
graced the music charts;
a statement reinforced
by the posthumous
release of Goin’ Back:
The Definitive Dusty
Springfield...”

THE LATE DUSTY SPRINGFIELD established herself as a unique and diverse artiste with an extraordinary musical range. Often referred to as The White Soul Queen, the talented and timeless singer's career began in the late 1950s when she sang with The Lana Sisters before forming The Springfields with her brother Dion and a friend, Tim Field.

Her solo career began in 1963 with the release of I Only Want To Be With You. Still singing in 1987, she released What Have I Done To Deserve This as a collaboration with The Pet Shop Boys. By 1994, after a difficult time which saw her conquer a serious health problem, Dusty resumed her career after Tarantino featured her Son Of A Preacher Man in his hit movie Pulp Fiction.

Sadly, on 2 March 1999, just short of her sixtieth birthday, Dusty Springfield lost her battle with cancer. Over a decade later, the release of an exceptional album and box set showcases her work — Goin' Back: The Definitive Dusty Springfield is laden with classics, rarities and unreleased material.

Hailed as one of the best female rock artistes ever, Dusty's brand of pop, soul and a touch of gospel was heavily influenced by American music and one of her greatest ventures was Dusty In Memphis. Her voice was distinctive with remarkable control; raw, sensual, emotional and poignantly Dusty — ably demonstrated by the fabulous box set Goin' Back: The Definitive Dusty Springfield.

This landmark collection celebrates one of the world's greatest female vocalists of the Twentieth Century. A work of art, it's a fitting tribute to the singer and has been carefully created by experts, aficionados and Dusty's associates.

Beautifully packaged, the pink box holds four themed CDs containing her hits, the rarities, BBC recordings and her work for stage and screen. There are also three full DVDs containing a host of rare footage that capture Dusty performing at her talented best. In all there are 92 Tracks on CD (22 Previously Unreleased; 10 Issued only in the US; 5 previously unreleased on CD) and 93 Performances on DVD, 32 of which have never before been released on DVD.

Fans will also be treated to an exclusive, 'stripped-down' recording of the Dusty classic Goin' Back and a new vocal mix of The Look Of Love, freshly crafted from the precious master tapes at the legendary Abbey Road Studios by producer Tris Penna that intimately exploit the full glory of Dusty's astonishing voice. In short, everything Dusty's admirers and lovers of music history could possibly wish for.

Several tracks see their first-ever airing on CD and every single song is creditable in its own right. The vibrant Dusty had a wonderful voice: clear, beautiful vocals alive with emotion and sensuality; breathily husky yet undeniably strong.

You Don't Have To Say You Love Me is always evocative; In The Middle Of Nowhere lively and passionate. Dusty has an excess of stamina, effortlessly singing her heart out and putting any difficulties she may have had in her personal life far behind her.

Happy sounds that lift your spirits: the fabulous Son Of A Preacher Man, the sweetly-sung How Can I Be Sure, the delightful Oh No, Not My Baby and the gorgeous Goin' Back. Dusty excels; exercising her vocal range effortlessly as she rises to the challenge.

Reminiscent of sunny beaches and gentle waves, Goodbye is sung seductively; followed by the fantastic Higher And Higher. We particularly liked Spooky, a musically-intriguing track that sends shivers down your spine. Goin' Back: The Definitive Dusty Springfield is an awesome album and the set is the ultimate collection to re-establish the late Dusty Springfield's standing in the music world.

A strictly-limited Collector's Edition is also available with a beautiful, exclusive hand-numbered canvas print of Dusty Springfield (only from The Universal Box Set Store).

DVD 2: BBC Television — 1 The Springfields, July 1961, includes: The Green Leaves Of Summer & Yellow Bird | 2 The Springfields, July 1961, includes: Ciolito Linda, Melodie D'Amour; Lonesome Traveller | 3 They Sold A Million, January 1973, includes: Stepping Out With My Baby & A Brand New Me and You Don't Have To Say You Love Me, both performed by The Young Generation | 4 The Rolf Harris Show (ZDF), July 1971: Knowing When To Leave & Up On The Roof | 5 Top Of The Pops, February 1978: A Love Like Yours | 6 TOTP, April 1979: I'm Coming Home Again | 7 Wogan, August 1985: Interview with Terry Wogan; Sometimes Like Butterflies | 8 The Old Grey Whistle Test, February 1978: Interview with Anne Nightingale.

The entire tracklisting of the DVDs contains an enormous amount of wonderful songs, too numerous to mention here, but including: Breakaway & Bambino, Live At The Lido, Gateshead; A new mix of Goodnight Irene, Silver Dollar, That's How Heartaches Are Made; Eliot Goshman remixes of I Only Want To Be With You, You Don't Own Me and Can I Get A Witness (stereo remix); Original vocal takes of Richest Girl Alive & Summer Love; Live At The BBC, 1966: Twenty-Four Hours From Tulsa & Won't Be Long; Live At The BBC, 1967: I Wish You Love & Peel Me A Grape; Decidedly Dusty from 1969: Angel Of The Morning & I Say A Little Prayer; Wimoweh (The Springfields), Brazilian Nonsense & Ballin' The Jack.