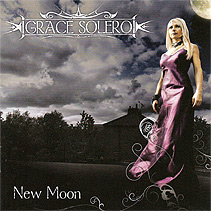 “Grace Solero’s music possesses
a certain raw energy that few artistes
can convincingly convey, says her
publicist, and if you can imagine a
bubbling cauldron of sweat-filled,
ragged indie rock, throw in Alanis
Morissette’s angst driven vocals, mix
with Skunk Anansie’s attitude and
add a pinch of PJ Harvey and you’ll
start to get the idea of her sound...”

AS COOL AS COOL, Grace Solero blazes in a spotlight of pure energy; her sound a distinctive and raw mixture of delicious retro and innovation. This free spirit can evoke the sounds of the pioneers of folk-rock while creating music that is all her own.

She is heralded as a glorious sonic collision of musical influences; her album New Moon is bathed in depth and versatility and swoops from the delicate to the extreme. Already championed by The Fly and Classic Rock, it is a mesmerising musical repertoire with heartfelt songs, all delivered in Grace's gutsy, vibrant yet elegant and sexy style.

Grace grew up on the colourful Island of Elba, off the west coast of Italy — now an internationally famous tourist resort — and was constantly surrounded by art and creativity. She studied at the Academy of Drama in Rome and has always been a natural performer. She had barely picked up her first guitar before her music gift became apparent.

The exceptional musical partnership with Californian guitarist Dan Beaulaurier came about when Grace moved to the UK with the intention of forming a band and he became aware of her. Adding bass and drums to complete the line-up, the quartet began to make a name for themselves on the underground London music circuit.

Grace's exceptional looks and the band's passionate performances began to attract a loyal army of followers which has spurred on a burning ambition to conquer the UK and beyond.

New Moon is an exciting phase for amazing Grace with stunning tracks that reflect the free spirit her music carries to its depths. Time For Living is a rushing, uplifting, urgent trip into the new musical and spiritual awareness that is New Moon while New Place takes on a character all of its own. The cute and well-composed Stay and If U Feel are among my favourites along with Heal Me, which comes together delightfully.

Apartheid is a breathless, emotional track with soaring notes that hit all the right spots in every sense. With echoes of the likes of Kate Bush and Hazel O'Connor, Grace's individuality shines through. This is indie rock in its finest incarnation.

It must have been a great boost for Grace that the band's success in the UK has been reported throughout Europe, including in her homeland. A recent cover shoot for Italy Magazine sparked further interest in the band as the Italian Media backed their own home-grown talent. Don't miss this girl!

Grace has already started winning hearts and making a huge impact in England where she has been rattling stages and blowing minds up and down the country with the tour that started on 22 September (2009) at Water Rats, Kings Cross. Further dates are 22 October at Dublin Castle, Camden, London (on stage 9pm); and 30 October at The Bullingdon Arms, Oxford (on stage 9pm). More dates are to be added, including The Fly, London.

• Emerging like a dark pop-rock cloud with its gritty lyricism, soaring riffs and pain-ridden vocals, the album New Moon will be released on 26 October (2009), preceded a week before (19 October) by the single Apartheid. Great Stuff, Grace.

"New Moon is an exciting phase for amazing Grace with stunning tracks that reflect the free spirit her music carries to its depths" — Maggie Woods, MotorBar

"Grace Solero's Apartheid is a breathless, emotional track with soaring notes that hit all the right spots in every sense" — Maggie Woods, MotorBar

"Passionate, emotional and delivered with strength and conviction" — Planet Thrash

"Nothing short of stunning" — Alternative Magazine