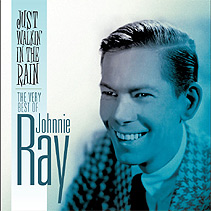 “One of the finest Rock ’n’ Roll singers
of the 1950s, Johnnie Ray’s critical
and commercial standing was equal to
that of Frank Sinatra and Elvis Presley —
some say it was even more forward-
thinking. Sony BMG is to release the
album Just Walkin’ In The Rain: The Very
Best of Johnnie Ray on 19 May (2008).
Great stuff for new and old fans alike...”

THE SENSATIONAL JOHNNIE RAY released Cry in 1952 and the tears dried up. Cry dominated the charts during that year and his career soon took off. As the other half (with Frank Sinatra) of the Teen Idolism movement, Johnnie released over sixty singles — ten of which were Top Ten hits in the UK. And three went all the way to Number One.

Containing 24 of his best-loved tracks that span his amazing career, Just Walkin' In The Rain: The Best Of Johnnie Ray opens with the unforgettable Yes Tonight, Josephine that couldn't be anything but Fifties and spent 16 weeks in the charts, reaching Number One,
in 1957. It is a typical big band sound from that era.

This is superb, easy listening. Each track has its own merit: the upbeat Up Above My Head that features Frankie Laine; the quirky Hernando's Hideaway; Please, Mr. Sun from 1952; and Let's Walk That-A-Way, also from 1952 and created with Doris Day. Check out the extraordinary range of Johnnie's voice on Look Homeward, Angel or the terrific words of the Cabaret-style Hey There. Get the feel-good factor with the emotive The Little White Cloud That Cried — the song is a comforting reminder that black clouds soon pass.

Although he died in 1990, Johnnie's influences are still around today so he will not be forgotten for his marvellous contribution to music. He was mentioned in the lyrics of We Didn't Start The Fire, by Billy Joel and Portishead used samples of his fabulous, strong voice in Biscuit. Johnnie is also the topic of the first three voices of Dexy's Midnight Runners' Come On, Eileen.

Don't forget that The Fifties was the "We've never had it so good" era and in today's financial climate this is just what we need to return to good old 1950's values and positive thinking. Joe Brown, Marty Wilde and Billy Fury have joined the wave of resurgence of popular 50s artistes performing well in the charts, and Johnnie Ray looks set to join them. And just look at the continuing interest in the 50s-set Happy Days and Grease…

Many of the 'hip' words and sounds in the songs of Just Walkin' In The Rain: The Best Of Johnnie Ray are typically Fifties. It would be an insult to call them 'dated', although what we would call classic nostalgia may not be to everybody's taste.

"Just Walkin' In The Rain: The Very Best Of Johnnie Ray may not be conventional music fare for the 21st Century. But it has an uplifting quality about it and Johnnie's fine vocals are among the best. Forget any preconceived idea you may have — this was the era when cool really was cool. Just open your mind and listen" — MotorBar