Margate Rock ’n Roll Reserve [album] On The Other Side [album] 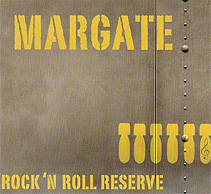 “Margate, the band whose name is
also an English seaside town but who
hail from the other side of the pond,
is making a welcome return to the UK
music scene with a fabulous new CD,
Rock ’n Roll Reserve...”

FORMED IN LOS ANGELES IN 2003, Margate comprises Alex Helbig on drums and lead vocals, Steve Weil on bass and Doug Mitchell on guitar. Having spent a number of years gaining musical experience with other bands, and with various changes to the line-up, Margate is now well established in its current incarnation.

Released in the autumn of 2011, Margate's latest offering Rock 'n Roll Reserve benefits from the band's penchant for throwing in three-part harmonies and group vocals wherever they can fit them. They are so good at doing this that the result is a group of guys that play well, harmonise superbly and actually sound as if they enjoy what they do.

Steve and Doug sing copious backups with Alex taking on both lead vocals and drums — something that had not been envisaged with the original set-up but which sets them apart from many other power trios. "We auditioned half the drummers in LA to try and get Alex out front, but nobody could play the tunes exactly the right way and Alex was killing it doing both, so we just kept it that way," says Steve. When guitarist Doug joined them, the band became a tight, cohesive unit and the boys began pounding away writing new material, playing gigs and getting the word out.

Recorded and produced by Margate and Paul Miner, the former Death By Stereo bassist and engineer and producer/engineer for New Found Glory, Thrice, Atreyu, etc, at Buzzbomb Sound Labs in Orange, California, Rock 'n Roll Reserve benefits from a number of highlights that include a splendid and unspoilt cover of The Beatles' Eleanor Rigby.

The more you play the album, the more you like it. Kicking off with the rousing beats and great sound of Control, Margate follows this up with the ever-fresh Eleanor Rigby. We especially loved Live It Up, a lively track with a great sentiment and Margate's sparkling performance on the fantastic title track, Rock 'n Roll Reserve.

Margate has been described as a high-energy three-piece rock band in the vein of Foo Fighters, Rise Against and Bad Religion. But how does this independent rock band stand out from the tens of thousands of other bands fighting to get into the spotlight? The answer can only be the guys' own ingenuity, camaraderie, hard work and perseverance.

What lies ahead for Margate? According to bass player Steve, the sky's the limit. The boys never take themselves too seriously. They make up a fun outfit that enjoys the buzz and takes every day as it comes. The day of the big rock stars may have come and gone, but Margate is content with being "that little band that wouldn't quit".

Guitarist Doug Mitchell adds: "All we ever wanted was to get our music out there, to let other people hear what we created. We're happier than ever making music together and we'll continue to do so until someone physically stops us from rocking." No chance of that, guys.

With a faux vinyl khaki disc, Rock 'n' Roll Reserve is a brilliant and thoroughly enjoyable slice of music artistry. With such energy flowing through the disc, you can just imagine the boys bombing along to the beat. We just love that sound. Keep on rockin'…

• Margate's Rock 'n Roll Reserve is released on Room 57 Records on 12 September 2011 and will be available everywhere fine music is sold, including on Margate's own website. 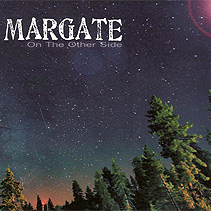 “Determined and sassy, three-piece
rock band Margate has turned ears
in and around Los Angeles, California,
this summer and, back home in
the UK, released a delightful ten-track
album, On The Other Side...”

HAVING BEEN COMPARED TO Foo Fighters, Jimmy Eat World, Bad Religion and Weezer, Margate is a talented rock / powerpop / punk band proving it can find its own niche with a new and imaginative album, On The Other Side.

Seasoned veterans of the music scene, all three members of Margate have played in rock bands on both coasts for over a decade. Formed in 2003, Margate has been steadily gaining fans in the Southern California area and beyond ever since. The line-up comprises: Alex (Drums, Lead Vocals); Doug (Guitar, Backing Vocals); and Steve (Bass, Backing Vocals).

Having played the top clubs in LA — including The Viper Room, Roxy, House Of Blues, Knitting Factory, Derby and Hard Rock Café — the band has also performed at street festivals, special events, on the Vans Warped Tour (San Diego, 2009) and on the Comedy Central stage as the house band for a sketch comedy show.

In 2006, Margate released its first self-produced full-length album. Songs In The Key Of Awesome was recorded at Westbeach recorders in Hollywood (The Offspring, Blink-182, Sublime) and quickly became a fan favourite. The album highlights the band's unique blend of hard rock and melody and a creative approach to songwriting.

Margate performed on live syndicated radio on the Frosty, Heidi and Frank show (97.1fm, Los Angeles) in 2007 as part of a segment entitled 'Should I Stay Or Should I Go', earning the band a 'Stay' vote from listeners and the in-audience crowd. The band has also received airplay on UCLA campus radio and on the world-famous KROQ (106.7fm, Los Angeles) as part of the 'Locals Only' radio show.

On The Other Side was released in August (2009) on Margate's own Room57 Records and showcases the band's progression over the years along with a newfound gravitation towards incorporating melody, counterpoint, complex harmonies and time signatures into pop rock masterpieces.

The town of Margate, Kent, in the UK was, of course, the spiritual home of both mods and rockers from the Sixties. Margate, the band, evokes a retro rock sound with the creditable album On The Other Side that includes some cool numbers, arresting lyrics and a superb presentation. An enjoyable romp through a great album.

We particularly enjoyed Believe In Steve with its fun element, Circles with its stirring treatment and Unchecked Aggression that begins with a police shoot-out. Time & Time Again and A New Hope are also notable as is My Dog Duke with its retro sound and the theme of a dangerous dog that has had its last strike.

• Margate's On The Other Side was released in August (2009) on Room 57 Records and is available now.

"Margate is a talented rock / powerpop / punk band proving it can find its own niche with a new and imaginative album, On The Other Side" — Maggie Woods, MotorBar