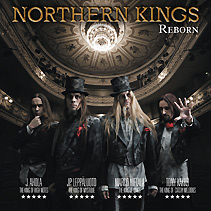 “Introducing Northern Kings: the
Finnish operatic-rock supergroup
released their debut album, Reborn,
on Warner Music on 16 June (2008)
— an album that has achieved Gold
status in their native Finland since
its release there in October, 2007...”

FEATURING SYMPHONIC ORCHESTRAL ROCK interpretations of Eighties classics — including Dire Straits' Brothers In Arms, Peter Gabriel's Sledgehammer, Lionel Ritchie's Hello, Cutting Crew's I Just Died In Your Arms, David Bowie's Ashes To Ashes, Tina Turner's We Don't Need Another Hero and Radiohead's 1993 song Creep — Reborn is the phenomenal debut album from Northern Kings that will open the gates for the band to conquer the UK and compel music fans to "get rocking".

Following on from the single We Don't Need Another Hero (released on 12 June, 2008) Reborn is the work of four of Finland's most successful heavy rock vocalists who have created something of a stir by forming the operatic rock supergroup Northern Kings. Originally using the dramatic name of Hell Divo as a working title, this dynamic symphonic rock quartet is a worthy alternative to the classically-trained vocal groups Il Divo and The 3 Tenors.

An all-star line-up of Finnish metal, Northern Kings consists of four vocalists — all of whom are frontmen for successful heavy metal bands. Determined to create something special together, they came up with the idea of arranging Eighties classics to metal versions, to which all four vocalists contribute. Pooling their individual talents, the four "greats" of Northern Kings are startlingly rousing with an "untouched" edge of rawness. Reborn is a superb blast from the past served up with a general helping of modernist innovation.

Northern Kings is made up of Marco Hietala from Nightwish and Tarot; Tony Kakko from Sonata Arctica; JP Leppäluoto from Charon; and J Ahola from Teräsbetoni — the band that represented Finland in this year's Eurovision in Belgrade on 24 May (2008), performing Missä Miehet Ratsastaa (Where All The Men Ride Forth), taken from their Myrskyntuoja album. Although none of the four vocalists is trained, each commands a distinctive vocal sound ranging from deep tenor, operatic to high-pitched falsetto.

Erkka Konhonnan, producer of Reborn is enthusiastic: "Initially, there was a lot of uncertainty about the idea of creating a vocal supergroup with four of Finland's biggest names in heavy metal on the same level as the classically-trained vocal groups like Il Divo. Since the release of the album in Finland, the album has sold Gold and the band has proved so popular that a new album is in the pipeline for release in November [2008] this year."

The publicity machine says: "Although many will see this album as a symphonic rock version of Guilty Pleasures, Northern Kings' orchestral arrangements make the original songs sound like cover versions. Vocally, the four Northern Kings singers are just as diverse in vocal range as any of the vocalists in Il Divo. However, it's their symphonic rock interpretation that puts a new perspective on the cultural significance of the original songs.

"If you've ever been a fan of Dire Straits' music, when you hear how Northern Kings have transformed Brothers in Arms into the symphonic rock equivalent of War and Peace, you'll be familiar with the original idea of the song; but this time around you'll listen to it with an entirely new set of ears.

"Vocally impeccable, and cleverly arranged, Northern Kings has given a new lease of life to many Eighties classics that may have been stuck in the decade that most people will want to forget, but can't. Who would have been brave enough to work on a symphonic rock orchestral arrangement of Radiohead's classic 1993 global hit Creep, personalise it and make it sound relevant in 2008? Or to apply a similar treatment to Ashes To Ashes?

"Finnish audiences are much more interested in guitar bands that perform their music live," says Errka Honnakan. "In Finland, mainstream pop music doesn't sell as well as metal, and Iron Maiden had been popular in Finland for years — long before the rest of Europe started playing their music."

Finland is no stranger to heavy metal music — which accounts for 90 per cent of the country's best-selling music. The general idea of the album is to give the original songs a personalised metal rock facelift — unlike most artistes who try to reproduce the sound and arrangements of the original songs. Reborn could be perceived as a novelty record, but it soon becomes evident that instead of copying the originals the band has gone outside the box to give them a new feel.

• The UK is the first country outside Finland to be able to buy Northern Kings' Reborn, which was released by Warner Music Entertainment on Monday June 16 (2008). Northern Kings' single, We Don't Need Another Hero, was also released on 16 June as a digital download and limited-edition CD single.

Tracklisting: Don't Stop Believin' | We Don't Need Another Hero | Broken Wings | Rebel
Yell | Ashes To Ashes | Fallen On Hard Times | I Just Died In Your Arms | Sledgehammer | Don't Bring Me Down | In The Air Tonight | Creep | Hello | Brothers In Arms. 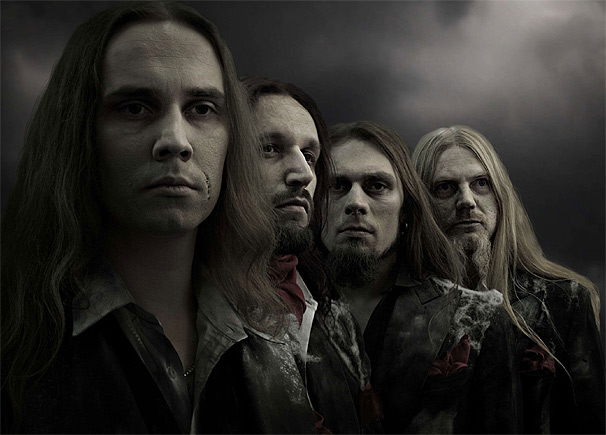 Who Are Northern Kings?

J AHOLA — Although he had no musical training, J Ahola can naturally bend a high note. His vocal range is crystal clear and sharp, to such an extent that it's unbelievable. He is currently the lead singer of Finland's most popular metal band, Teräsbetoni. The band, originally formed in 2005, are riding high in the Finnish album charts with their No 1 selling album Myrskyntuoja (Stormbringer). The band's first two albums have been certified Gold and its 2005 debut album Metallitotuus has been certified Platinum.

JP LEPPÄLUOTO — The only musical experience JP had was when he sang in the school choir while doing his military service. JP's voice may not be as instantly recognizable as the other band members, but without his mysterious voice the line-up would not be complete. He is the lead singer of the Finnish band Charon, which performs dark, depressive riff-based rock and is hugely popular in Germany, Spain and Russia.

TONY KAKKO — He has no professional music training, apart from having taken piano lessons, and is the lead singer of the Finnish metal band Sonata Arctica. Several of the band's albums have been certified Gold in Finland and Sonata Arctica is popular in Japan and France. Kakko's songwriting skills are impeccable and his vocal range is faultless.

MARCO HIETALA — In the mid Eighties he was the early pioneer of Finnish heavy metal and formed the band Tarot. Prior to that, Marco took voice training lessons and originally planned on studying in a music academy, but he was rejected due to the fact that he had already released two albums with Tarot. In 2001 he joined Finland's internationally successful metal band Nightwish, as bass player and co-vocalist.

We Don't Need Another Hero is great version and was originally written and produced by guitarist Terry Britten and features the London Philharmonic Orchestra. The song appeared in Mel Gibson's Mad Max: Beyond The Thunderdome and went on to become a 1994 international hit for Tina Turner. Love this song.

Broken Wings is a lovely song and well presented. It was originally a 1985 Number 1 hit single for American band Mr Mister. Comprising of session musicians and songwriters, the band was led by bassist/lead vocalist Richard Page and keyboardist/vocalist Steven George. Broken Wings went to Number 1 in the US Billboard Singles Chart and featured on their second album, Welcome To The Real World.

Rebel Yell is cool and was the title track from Billy Idol's 1983 solo album Rebel Yell. The song fell just short of the Top 40 in the US Billboard Chart. Idol was one of the first pop/rock artistes to achieve massive success in the early Eighties due to MTV.

Ashes To Ashes is also a good one. It was originally a Number 1 UK hit single for David Bowie from the album Scary Monsters (1980). Summed up as the continuing adventures of Major Tom from Space Oddity, the song was an acknowledgement of the then-burgeoning new romantic scene. Very brave, this, for Northern Kings.

Fallen On Hard Times is a likeable cover. It appeared on Jethro Tull's 1982 album The Broadsword And The Beast which peaked at Number 19 in the US Billboard Album Chart. The album was produced by ex-Yardbirds Paul Samwell-Smith.

I Just Died In Your Arms was written by Nick Van Eede and in 1987 this song became a massive hit in America for British band Cutting Crew and went to Number 1 in the US Billboard Hot 100. This is really good — a splendid alternative to the original and is a well-controlled outing for the Northern Kings' vocal harmonies.

Sledgehammer originally appeared on Peter Gabriel's fifth solo album So (1986). The song went on to become Number 1 in the US Billboard Hot 100. An Otis Redding-inspired soul-pop masterpiece of originality, Sledgehammer propelled Peter Gabriel toward blockbuster status. An excellent version.

Don't Bring Me Down originally appeared on the Electric Light Orchestra's 1979 studio album Discovery. Originally written by Jeff Lynne, the song went to Number 4 in the US Billboard Top 100 Singles Chart. This is great, too.

In The Air Tonight was first heard on Phil Collins' 1981 debut solo album Face Value. The song became a Number 2 hit in the UK and a Top 20 hit in America. Another nice one.

Creep originally became a global hit for Radiohead when it appeared on their 1993 debut album Pablo Honey. The self-loathing breakthrough single achieved a rare power that is both visceral and intelligent and went to Number 34 in the US Billboard Hot 100 Singles Chart. Good… but watch out for the F-word!

Hello originally appeared on Lionel Ritchie's 1983 solo album Can't Slow Down. The song went to Number 1 in the US Billboard Top 100 Singles Chart. The promo video for the single proved to be popular on MTV, which saw Ritchie singing the ballad to a blind woman. The well put together Northern Kings version has an interesting slant.

Brothers In Arms is the title track from Dire Straits' 1985 album of the same name. The album featured the song Money For Nothing, a sardonic attack on MTV, that ironically became a popular favourite on MTV! I love the original version but thought this was a very creditable and enjoyable journey of rediscovery.

"Pooling their individual talents, the four "greats" of Northern Kings are startlingly rousing with an "untouched" edge of rawness. Reborn is a superb blast from the past served up with a general helping of modernist innovation" — MotorBar