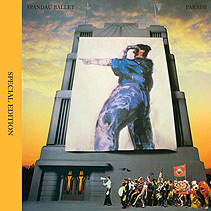 “How wonderful that Spandau Ballet
is back on the music scene again
after reforming in 2009, and is now
releasing brand new tracks along
with favourites from the Eighties on
terrific remastered versions of the
band’s chart-topping albums True
and Parade...”

FOLLOWING A HUGELY SUCCESSFUL REFORMATION TOUR around Europe and the Southern Hemisphere, Spandau Ballet is back where the hand belongs at the pinnacle of the British music scene with that tasty recipe of jazz/soul/funky synthpop infusions.

After playing to over 120,000 UK fans at venues that include three nights at London's 02 Arena and releasing a new album and live DVD, Spandau Ballet release the remastered versions of their chart-topping albums True and Parade on EMI Records with bonus tracks and a superb DVD. 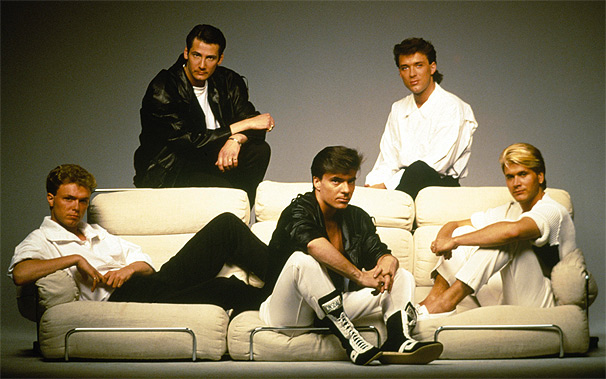 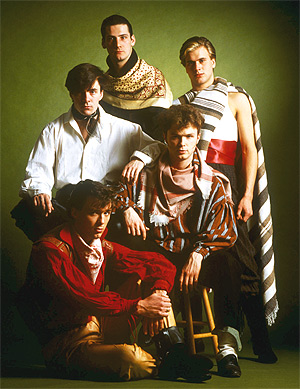 Originally released in March 1983 and featuring such top hits as Gold, True, Communication and Lifeline, True was the band's first number one album. Recorded at the legendary Compass Point Studios at Nassau in the Bahamas, it was the band's groundbreaking album of blue-eyed soul that propelled the boys to international stardom and topped the charts all round the globe.

The original version features as CD1 in this collection while CD2 comprises of fantastic bonus material that includes ten different mixes of the singles — five of which are appearing on CD for the first time — and four previously unreleased live tracks recorded at Sadler's Wells on 1 May 1983.

True, the album, is a treasure trove of Spandau Ballet's finest work. Kicking off with Pleasure; a superb opportunity for a talented vocalist. Code Of Love has a lot to like about it and the ever-fabulous Gold has a striking lead to the compulsive chorus. The lovely toe-tapping Lifeline and the wonderful, poignant title song True go right to the heart. Spandau Ballet has certainly built on Foundation as new treatments on the bonus CD are enjoyable and unspoiled; creditable in their own right. Glow is great and Heaven Is A Secret is a really sweet track.

The entire show from the evening at Sadler's Wells is presented on DVD — Over Britain — for the first time. It's a wonderful disc with five contemporary Top Of The Pops performances and a mini-documentary entitled True — The Making Of The Album.

The DVD enables you to feel the atmosphere and Spandau Ballet has tremendous Communication with its audience of fans. There is a great initial build-up to the band's appearance to the song Foundation. Spandau Ballet is a good-looking band, exciting and a pleasure to watch; talented performers who make it look so easy. Check out the gorgeous To Cut A Long Story Short.

Spandau Ballet has such energy and vivacity; the band plays the audience well, tantalising and having great fun and this DVD is an absolute must for true fans.

The second of the remastered album, Parade, was originally released in July 1984 and reached number two in the UK album charts — one of the biggest hits of the year. CD1 features hits and fan favourites that include the delicious Highly Strung, the lovely Round And Round and the great song Only When You Leave. Of equal merit is I'll Fly For You and the enjoyable With The Pride. One of our favourites is the superb Nature Of The Beast. CD1 also contains five alternate mixes of singles and B-sides and CD2 features a BBC In Concert show from Wembley Arena that was recorded in December 1984. A terrific album.

If you missed Spandau Ballet on their spectacular sell-out UK tour late in 2009, hopefully you caught up with them live at their first-ever festival performance this Summer at the Isle of Wight Festival on Sunday 13 June or at the Isle of Man Bay Festival on Saturday 20 June. Watch out for further opportunities!

Back in the limelight, the boys are giving it all they've got; proving that Spandau Ballet still has what it takes to succeed in the 21st Century.

• The True and Parade remastered albums plus bonus tracks and DVD will be released by EMI Records on 21 June, 2010. Spandau Ballet's first two albums — Journeys To Glory and Diamond — are also available as remastered and expanded Special Editions on EMI Records.

"...the boys are giving it all they've got; proving that Spandau Ballet still has what it takes to succeed in the 21st Century" — Maggie Woods, MotorBar 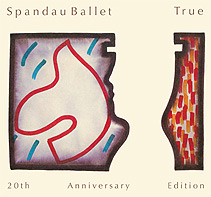 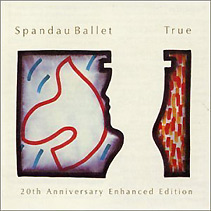 “Popular with all ages for the beautiful,
timeless music they produce, Spandau
Ballet celebrated an unbelievable
25th* birthday on 30 April (2008) of their
landmark Number One single, True...”

IT'S VERY DIFFICULT NOT TO LIKE SPANDAU BALLET. It's true. The remarkable thing is that, on 30 April, 1983, one of the UK's most enduring, globally-loved songs — True — went to Number One in the UK charts and stayed there for four weeks before subsequently reaching the same position in another 20 countries. True wears incredibly well and it certainly does not sound like a 25-year-old song.

Spandau Ballet was on tour in the UK when True, the title track from their third album, was released. Before that, two singles from the album, Lifeline and Communication, had reached the Top 10 but it was the beautiful, lushly-produced, intensely-romantic ballad with the unforgettable melody that topped the charts and all hell broke lose — True, the single and the album, soared to the top of the charts and catapulted the band into worldwide superstardom.

The already sold-out tour understandably began to get out of hand and security needed to be brought in to control the thousands of hysterical girls who descended on the final dates.

In a party to end all parties, Spandau Ballet's success with True was celebrated with a boat trip down the Thames following the band's knockout performance at the Royal Festival Hall.

According to BMI, True has notched up almost four million radio performances in North America alone, and it continues to be a favourite on mainstream UK radio play lists and radio stations worldwide.

The unforgettable and melodic True has been covered and adapted many times by other artistes from all over the world, who saw its possibilities as a hit for themselves. It has also been adopted by the R&B community and adapted and sampled with great success many times by such artistes as PM Dawn, Teddy Riley, Nelly and — most recently — Lloyd. The track has also featured in countless feature films, including blockbusters Charlie's Angels, The Wedding Singer and 50 First Dates as well as many television shows worldwide.

True is the latest soundtrack to the Marks & Spencer Food advert and as well as being the chosen special song to thousands of couples it is also a favourite request at wedding discos in Britain.

EMI's digital EP release of True includes the original single, a new mix by Gary Kemp and original co-producer Tony Swain, the remastered album version plus a spine-tingling live recording of True and another Spandau classic hit — Gold — from the last show of that infamous 1983 tour at Sadler's Wells.

Watch out this summer for a comprehensive Spandau Ballet Sight & Sound CD/DVD which will include all the hits and their accompanying promo videos in one great package. Back in May, Gary Kemp talked of the writing of True and performing the song acoustically for the first time since he presented it to the band in 1982, in an episode devoted to him in the Sky Arts series (Channel 267) called Songbook.

• To celebrate this 'silver' anniversary, EMI Records released Spandau Ballet's True as an EP digital release on 5 May (2008).

*25 years from the date Spandau Ballet was first formed.