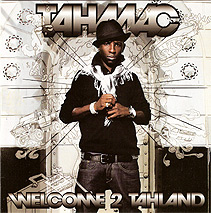 “What better antidote to the world’s
woes than a little ray of musical
sunshine from an up-beat Brooklyn
guy — Tah Mac plasters a smile
on your face with his new album
Welcome 2 Tahland...”

ONCE IN A WHILE YOU FIND an artiste who is so vital and talented that you cannot help but be hooked by his performance — whether it is live or pounding out through your speakers.

The effervescent and charismatic Tah Mac is one such gifted individual. Oozing spirituality and charm and with a big personality, Tah Mac creates first class hip-hop that radiates the feel-good factor

Tah says: "We've all heard so many people and news stories all over the media going on about the world's economic turmoil recently, I just wanted to put out a record to try and cheer people up a bit and offer a few minutes of escapism." Just close your eyes and listen — this is real exhilaration with a buzz.

With a decade of experience under his belt, Tah knows how to create the very best music with top quality artistes. Not one to be pigeon-holed, Tah has worked with a diverse array of talent including Jo Jo, Javine, Ciara, Onyx, Leona Lewis, Redman, Aretha Franklin and The Charlatans. It is Tah who describes his music as a 'global sound', crafting a musical signature that's uniquely his own.

Having left his Brooklyn base, the artiste and über-cool producer extraordinaire headed straight to our side of the pond to dish up a musical feast to the delight of British aficionados, unleashing upon them his long-awaited debut long-player, Welcome 2 Tahland.

Welcome 2 Tahland is loaded with full-on fun from remarkable Stateside export Tah Mac. Lavish Lifestyle is perfect as a stand-alone single; it is compulsive and tuneful and you just can't stop rapping along. Tah Mac roasts the streets with his cultivated 'global sound' — Welcome 2 Tahland drips with energy and verve.

Home grown talent Mutya Buena sings her heart out on the delightful Give Back, which has chart potential written all over it. Tah's debut single Time Of My Life is a fantastic, uplifting, feel-good party track and was a timely introduction to the entertaining antics of Tah Mac. Back In Time is wonderful and Lonely is a charmingly pop-fuelled track with soul and harmony. With the Future Freakz remix of Time Of My Life riding high in the dance charts in late 2008, Tah wanted to give Lavish Lifestyle some added razzmatazz to the upbeat feel. 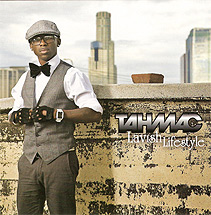 Of course, you may think such a release is ill timed for the current climate — but that's exactly the point. Why not buck the trend and do something a little different from other artistes? "This recession won't last forever; we can still all one day look forward to living a Lavish Lifestyle once the world gets back to normal," Tah says. But the 'lavish lifestyle' he refers to is not that of flashy cars, fast women and bling, but the simple things in life like love from family and friends and a roof over your head.

To add the final knockout punch, Tah roped in a veritable A-List of music talent and collaboration. With the collective production team C.A.S.H, Cee-Lo Green from Gnarls Barkley lends his vocal skills to Lavish Lifestyle — co-produced by DJ Lethal from Limp Brizkit and House of Pain fame, whose production credits include: Run DMC, Sepultura, Rob Zombie, Everlast and Sugar Ray. Add on guitars, Richie Kotzen from glam rockers Poison and Lavish Lifestyle looks set to be a monster of a track! Released on 23 March 2009, it is the second single release from Tah's hotly-tipped album Welcome 2 Tahland.

Welcome 2 Tahland is a positively charged concept album that takes you on a journey through Tah's musical influences, philosophy and lifestyle as he lays down the party anthems for 2009 and gets everyone moving on the dance floor.

Dreaming is great fun, a surging track with a speedy delivery! Tah Mac is H-O-T and brings a truckload of spice into your life. Lavish Lifestyle is superb and leaves you wanting moe. The Interludes are cute. Other Girlz's featuring C.A.S.H. is a trip out of the ordinary to a melodic, rapping and tapping track. Back In Time is uplifting and full. Give yourself a raise: the attention-grabbing (but never vulgar) Tah Mac will take you to new heights.

Having cut his teeth with the legendary hip-hop outfit The Def Squad featuring Erick Sermon, Keith Murray, Redman, Jamal, Malik and Da Rockwilder, Tah Mac has produced some of the most phenomenal tracks of all time, helping build the Def Squad brand into a staple fixture in hip-hop culture.

So watch out for Tah Mac as he brings his spectacular live show and killer bag of tunes over to the UK. 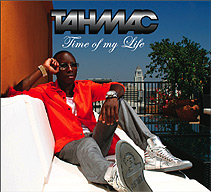 “Chill out with Time Of My Life from
multi-talented producer and singer
Tah Mac, jetting over from the far side
of The Pond to pour a good slug of
uplifting hip-hop onto the UK’s troubled
shores...”

HITTING THE TARMAC RUNNING is Brooklyn-based producer and singer Tah Mac, who has left his home turf in the USA to bring us all something to think about. Time Of My Life is the debut single taken from the much-anticipated album Welcome 2 Tahland and before the year is out it looks set to sizzle.

Described as "Hip-Hop's best-kept secret", Tah is one of the most explosive artistes in today's entertainment world and he brings with him some of the freshest, most talked about tunes on this side of the Atlantic.

Just the track to make your party sparkle, Time Of My Life is accompanied by the equally uplifting and feel-good remix. Hip-Hop has never had it so good and Tah should be well-prepared for that inevitable invasion of the charts.

With a decade of experience under his belt, Tah masterfully creates the very best music with top quality artistes. Not one to be pigeon-holed, he has worked with a diverse array of artistes from Erick Sermon, Javine, Clara, Onyx, Leona Lewis, Redman and Aretha Franklin to The Charlatans. Often describing his music as a "global sound", Tah has finally crafted a sound that is uniquely his own.

Tah Mac's latest full length effort features a veritable A-List of old school talent and rising stars. No stranger to quality and style, the man from NYC has secured the likes of Mutya Buena and C.A.S.H (Cee Lo Green from Gnarls Barkley) to give the album a knockout punch.

With a fabulous, strong, sexy and attractive voice, Tah knows what it's at — Time Of My Life is an upbeat track with a melodic chorus that is well constructed and full of mischief and fun. Tah's delivery is as gently soothing as it is uplifting and you can dance the night away to this kind of music because it's quite impossible to sit still. Just the thing to drive the credit crunch from your thoughts.

Tah's personality induces you to feel closer to him and share his infectious songs as you find Enjoyment with a capital E with this compelling singer. Have the time of your life with Tah Mac and you won't look back. Can't lose, really.

So watch out for Tah Mac as he brings his spectacular live show and killer bag of tunes over to the UK this year!

"With a fabulous, strong, sexy and attractive voice, Tah knows what it's at — Time Of My Life is an upbeat track with a melodic chorus that is well constructed and full of mischief and fun" — Maggie Woods, MotorBar