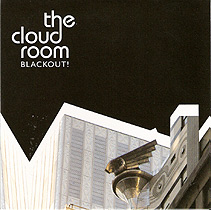 “We’re great fans of The Cloud Room
and are very familiar with the terrific
Blackout!, their second single release —
we defy you to keep still as their
delightfully retro, twangy and upbeat
offering surges from your speakers...”

THIS MEGA-TALENTED BAND has a distinctive sound, with significant dramatic and skilful instrumental participation and clear vocals — just listen to the lyrics because they're creative, prophetic and poignant poetry. The dynamic Blackout! is a track from The Cloud Room's self-titled album already reviewed [see below]. Blackout!, due for release shortly, is accompanied by Devoured in Peace, which is the ideal foil as a second track.

Described as "jerky, rattling, nu wave influenced, indie pop stomp with a vocal that has enraptured The Cloud Room's live audiences over and over again", Blackout! is destined for the 'favourites' slot in our car's CD stacker and is the perfect follow-up to the hugely successful, limited-edition Hey Now Now. Hey Now Now could not fail, and we think Blackout! will make a similarly indelible mark in chart history.

The lyrical content, in the words of the publicity machine, "sounds like a fairytale Apocalypse on acid (...we were making wishes on some missiles we mistook for shooting stars...). The track showcases J's voice in all of its self-consciously Bryan Ferry crossed with David Bowie mutant glory, harnessing New York style posture and glamour whilst retaining a rough and ready, scuzzy edge that keeps those feet moving around sticky dance floors.

"With lyrics that reference NYC contemporaries The Rapture and West Coast-based Joanna Newsome (Milk Eyed Mender), The Cloud Room are a band whose music has been taken to the hearts of America's glitter-ati, fashionistas and international musical legend. With a sound that is reminiscent of Blondie (circa 1978 One Way or Another era), The Cloud Room have that rare quality of being both musically and technically brilliant — which the muso's love — whilst also writing catchy hooks that the rest of us can shout along to whilst playing at 'NYC cool' on stage (for 'on stage', read 'in bedroom/bathroom', etc)."

The flitterati among us will be compelled by The Cloud Room to linger longer. They have SXSW shows lined up and a further tour planned for April, along with a number of festivals in the pipeline.

Sixty-five million years ago a ten-kilometre-wide asteroid impacted Earth and wiped out the dinosaurs. You missed that one. Don't miss The Cloud Room — they are going to have a momentous impact in 2008. No wipe-out, but you'll discover what your feet are really for! — Maggie Woods, MotorBar

"…makes you want to jump up and down like a defiant Ritlin-poppin' kid on their parents' perfectly made Ikea bed until you have an aneurysm. You'd be dead, of course, but what a way to go…" — NME

"The jerky style of Hot Hot Heat jamming with Tapes N Tapes on the next track Blackout!, another standout" — Snafu 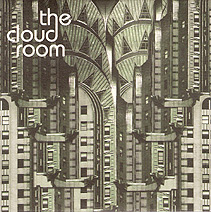 THE EAST COAST'S exciting new export from across the pond, The Cloud Room, is a band full of character with a plentiful supply of indie disco music that is aptly described by the Amplifier as: "…melodic pop, synthy bounce and spiky rock with punk's marital rhythms." We found it delightfully twangy, with a finger-snapping, hip-wiggling beat. Standing still is NOT an option.

Formed in 2004, The Cloud Room hail from Brooklyn, New York. A relative of American Minimalist Composer Philip Glass, lead guitarist and vocalist J founded The Cloud Room after moving from California to New York in 2000. The rest of the line-up is bassist Jonathan Petrow; Jason Pharr on drums; guitarist David H and Steve Milton on keys. The name comes from the speakeasy at the top of the Chrysler Building during Prohibition and the publicity machine says: "It's not difficult to see why the scenesters and musos have been lauding the band — who have also got a distinctly populist appeal."

Major influences (that work incredibly well!) are listed as Led Zepplin, Stevie Wonder, Sonic Youth, Joy Division, Marc Bolan, Jimi Hendrix and — noticeably — David Bowie. It comes as no surprise to learn that Bowie is one of the many successful musicians whom the band already counts amongst its supporters.

A lot of hard work both on the road and behind the scenes all across the Unites States paid off. The crackling of underground excitement grew and The Cloud Room became a buzz band across the Atlantic when their superb single Hey Now Now became a sensation on college radio and music blogs.

It didn't take long for UK based A&G Records to snap up The Cloud Room and the campaign received a welcome boost when the lead single Hey Now Now — described by Pitchfork-media as "A dynamite single… delivered so infectiously it's near delirium" — became the theme tune for the new Pepsi Max television commercial starring Brazilian and Barcelona football star Ronaldinho and airing on British television from mid-August (2007). The Cloud Room became the first ever unsigned band to have their work featured in an international campaign.

Hey Now Now is one of those perfectly crafted, irresistible and timeless indie guitar tracks that can bridge the decades. The story behind the track of the year is a stark contrast to its euphoric refrain. Written in the winter of 2004, when J was forced to wait for the results of an HIV test, Hey Now Now is a fantastic tribute to J's tenacity. The worst eighteen days of his life saw him throw himself into writing songs and when his test came back negative he was so ecstatic that it gave him the edge to tackle his creativity with renewed enthusiasm. He says: "I wanted to somehow bottle that searing joy." Well done, J — you've succeeded.

While thinking of Hey Now Now and the events surrounding its birth, I am reminded of Leonard Cohen's words "…and now the infant with its cord is hauled in like a kite…" as J draws on his reserves despite his fears and then his joy is tripping over itself as he pours his relief into completing his creation.

The Cloud Room album was almost a non-starter because (shock, hor-ror! — who says lightning doesn't strike twice?) J's apartment burned down at the end of 2006. Although he was unhurt, he lost everything he owned — including the band's gear. Every dark Cloud has a silver lining — J's was that he was able to extract the band's material from the charred remains of his computer and The Cloud Room album was saved!

The authentic Sunset Song opens the album and is one of two special UK bonus tracks along with Follow Me, which creates a consuming power through the relentless desperation in J's vocal performance. He churns out his talent effortlessly and among the highlights of the album joining the fabulous Hey Now Now are the spiky, nu-wave inspired Blackout! and the longing, thought provoking Waterfall (with the bridge deserving particular attention!).

These, and Sunlight Song prove the band's ability to write as good as David Bowie or Roy Orbison; create lyrical content akin to Leonard Cohen or experimental soundscape ideas that could have been master-minded by Syd Barrett or Brian Eno — all of whom they count among their influences. The wish of today for a simpler way of life is the theme of Beautiful Mess and the perfect build throughout O My Love ensure that The Cloud Room has created an album of intriguing musical diversity with recurring themes weaving throughout a mosaic of vocal delight and natural vision.

Having already toured with some of the most successful UK and international acts — including Muse, Editors and Norah Jones — The Cloud Room will shortly announce a headline UK tour for October. — Maggie Woods, MotorBar

• The Cloud Room's highly-anticipated single Hey Now Now was released on limited-edition 7-inch and download on 1 October ('07). The self-titled album was released on 8 October '07 (A&G Records).

WHAT THEY SAY ABOUT THE CLOUD ROOM'S MUSIC:

"A dynamite single… delivered so infectiously it's near delirium"
— pitchforkmedia

"A genuinely brilliant single, up there with The Killers' Mr Brightside, Kaiser Chiefs I Predict A Riot and The Decemberists 16 Military Wives as one of the great alterna-pop singles" — All Music Guide

"Lead singer J of The Cloud Room sounds like a more up-beat Paul Banks of Interpol fame. The comparisons to 80's British post-punkers like Joy Division and New Order are easy to make, but The Cloud Room is also clearly influenced by the dance-rock NYC scene in which they flourished." — Spin.Com