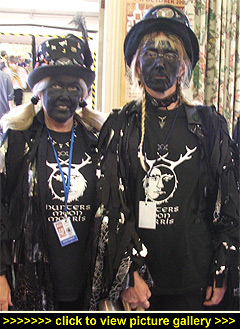 “MotorBar’s Peter Brownlow has
been around the block as far as
UK Beer Festivals are concerned,
but he never tires of the fantastic
atmosphere [Or the beer! — Ed].
Even more pleasant surprises
awaited him at Eastbourne...”

2008 UK BEER FESTIVALS are too numerous either to mention here or to visit at the best of times, but because of the arrival of my first grandchild two years ago I have had to curtail my activities to spend some time with her and allow her to believe she has me completely wrapped around her little finger.

However, I still managed a visit to many (too many, my wife corrects me!) of the best in 2008: including Battersea, Bexley, Chelmsford, Canterbury, Earl's Court — and my latest outing to Eastbourne.

I am constantly asked by the uninitiated: What makes a good beer festival? No, surprisingly, it isn't just the beer. It is the atmosphere, the ambience, the feel-good factor of being there and the people you meet — and not every beer festival ticks all the right boxes.

Which is where Eastbourne comes in. The Eastbourne Beer Festival is an annual event that has it right down to a fine art. Beer, of course, is the raison d'être for the festival and the organisers allowed plenty of space for a very impressive turn out of breweries.

Over 120 cask ales from across the UK were on offer at Eastbourne and they were served in free festive glass pints, half pints or third of a pint measures. I was intrigued by the latter measure as it is a sensible idea that is growing in popularity at beer festivals.

Adventurous drinking fans can also 'drink around the world' while remaining in one spot with a Brahma Chop from Brazil or a Mac's Gold from Down Under. For the record, fine wines, ciders and perries are also available.

Although I had never tried Beachy Head Original Ale before, I liked it well enough to make a note to look out for it in the future. Roger Green, one of the two brewers at the Beachy Head Brewery, gave an interesting talk on the Saturday morning of the festival on the art of brewing — and I was able to talk to him later after he'd finished his turn at the festival with the Long Man Morris Group (is there no end to some people's talents?!). He told me that he produces two beers. There is The Legless Rambler, a 5.2 per cent ale named in tribute to all those who walk the South Downs Way and which uses the Brambung Cross hops to give the beer its distinctive flavour.

The other beer, The Original, is a 4.5 per cent bottle-conditioned Bitter produced with only water, Floor malted Barley (optic and crystal) and Challenger Hops from English producers and it does have a strong hoppy flavour.

That Beachy Head Original Ale is popular is not in any doubt: on the opening night of the previous year's festival it sold out in less than three hours. The Beachy Head Brewery (beachyhead.org.uk) is located at the rear of the Seven Sisters Sheep Centre, Birling Manor Farm, East Dean, and has been in operation since October 2006.

The brewery mainly produces bottle-conditioned beers which are supplied to local outlets within a 20-mile radius of its premises. Cask conditioned beer is produced for beer festivals and for one or two local pubs. Tours of the brewery are available by arrangement (Tel: 01323 423906). Riveting stuff!

The 2008 Eastbourne Beer Festival was held in the elegant Winter Garden at Eastbourne and this is a delightful venue. This is its sixth year and the festival is organised by Eastbourne Borough Council in association with CAMRA.

Running over four sessions (Thursday to Saturday evenings and including Saturday lunchtime), Eastbourne Beer Festival is one of the largest of its kind in the South East, with over 3,500 attending last year and consuming more than 11,500 pints.

The festival prides itself on being an Oktoberfest style festival, with live music available at all sessions from the likes of Big Al's Trio (Boogie Woogie), EG Riley (Soul) and Lackadaisy (Gypsy Swing) through to the Tar Babies (60s Band), Band Of Two (Folk), Red Jackson (Blues) and Marcella Aldous (Acoustic set).

A Jam night for local musical talent was held on the Friday evening in aid of St Wilfrid's Hospice, and the festival was rounded off by the Oompah Brass Band, who created a traditional bierkeller atmosphere in the finest Bavarian tradition.

What a wonderful way to celebrate the drinking of beer — a thoroughly enjoyable, well organised event that ticks all the right boxes. And more.

Beer drinkers take note: CAMRA MEMBERS' WEEKEND AND AGM: 17-19 April 2009. Interesting to note that Eastbourne's Winter Garden is also the venue for this members' event that includes the National Annual General Meeting. For more information about CAMRA or the weekend, please go to camra.org.uk.

DETERMINED TO GET ALL I could out of the Eastbourne Beer Festival, my wife and I decided to stay the night. And where else could you guarantee a decent night's slumber than a hotel called The Big Sleep!

The Big Sleep is an hotel where less really is more. Opened in July 2008, this designer budget hotel presents a totally new concept for Eastbourne. Backed by John Malkovich — there is a picture of him in every room — and owned by Cosmo Fry of the famous Fry chocolate family, The Big Sleep is well positioned on Eastbourne's sea front and offers stunning views of the coastline and the famous pier.

The hotel has a cool, fresh and funky look that is the theme throughout the building. There is a relaxing, chic bar area and a trendy games room with table tennis and snooker, wifi throughout the building and also conference and meeting room facilities. In keeping with its name, the Big Sleep Hotel offers a range of spacious accommodation to suit all needs.

The bedrooms comprise family studios, group rooms, suites, doubles, twins and singles. All have a unique, modern, fresh design in sumptuous yet restful shades of blue and pink and crisp white linen and duvets. A flat-screen television with Sky Sports (sheer bliss after a hard day's drinking!) is in each room.

Comfortable beds and extremely helpful staff add to the pleasure of staying at this fine hotel. Continental Breakfast is provided but otherwise no food is available at the hotel. However, The Big Sleep has a very impressive list of recommended places to eat in Eastbourne — some right on the doorstep.

And if you thought that Eastbourne was just a retirees paradise, think again. The bars are full of lively music and young people and even the older people we met locally were young at heart. There is plenty to do and see and our problem was fitting it all in. For more information about the resort, go to visiteastbourne.com.

Located in King Edward's parade, The Big Sleep Hotel lies within the town's theatre district and is also within easy reach of Devonshire Park, which in June 2009 will host the Aegon International Tennis Event. Ample on-street parking is available close to the hotel and Eastbourne train station is no more than a healthy ten-minute walk from the hotel.

Tariffs range from Ł45 for singles, Ł65 for a double/twin and Ł80 to Ł100 for a family room. Prices are per room per night and include Continental Breakfast.

JUST TO ROUND OFF THE WEEKEND, my football buddie and I were given tickets to watch Eastbourne play at home to Stevenage at Langney Sports Club.

As part of the Blue Square Premier League, Eastbourne showed a great deal of determination, playing well and scoring the first goal against Stevenage, who fought back to equalise. Then, a few minutes before the final whistle and in time added on, Eastbourne scored the deciding goal to beat Stevenage 2-1. As we were in Eastbourne, we were rooting for the home team and exchanged high-fives with a delighted and understandably noisy young supporter who was seated immediately behind.