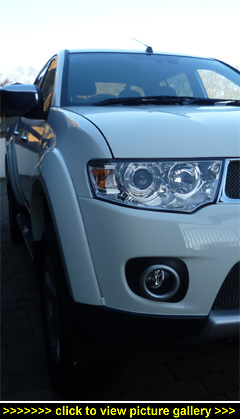 “Either you’re a Barbie kind of guy
or you’re not. If you are, Mitsubishi’s
evergreen L200 pick-up is still out
there, doing what it does best —
but nowadays it’s not unusual to
find a woman behind the wheel...”

SO WHAT DOES A PICK-UP TRUCK say about you anyway? Actually, we gave up on all that 'you are what you drive' mumbo-jumbo a long time ago. After decades writing about cars and meeting famous peeps who drive car park-scarred pick-ups and million-pound-bonus-banking bankers who are as pleased as punch pootling about in a Cooper S, it's clear that life's too short to typecast drivers on the basis of their wheels.

Experience has taught that the only rule that holds true when it comes to cars is that if it serves you right, then drive one. So it is with Mitsubishi's Barbarian. It unquestionably serves you right; whether it's shrugging its broad shoulders at our third-world road surfaces, romping safely through our seasonal sprinkling of fluffy white chaos, or wading across our waterlogged countryside, a 'Barbie' has that reassuring ability to get you where you're going — whatever the odds.

If you've only previously looked, then hands-on will be an eye-opener. While it's an undeniably imposing beastie, it's traditional in-your-face looks are no longer quite so intimidating thanks to the swept-back and more car-like nose treatment.

It's an easy climb up into the spacious and airy cabin (use the non-slip silver-grey metal side-step if it helps). Settle back in the supportive, leather-upholstered chair and you'll find the view out to be equally imposing.

A Barbarian's day job might entail working outside in all weathers but that doesn't mean it has to be spartan inside. This high-end Barbarian is anything but — the silver-and-black fascia is attractive and logically arranged, marked out by a central touchscreen for the Kenwood multimedia unit which incorporates an extremely user-friendly navigation system with DAB radio, Bluetooth, iPod connectivity, CD, DVD, TV, video, and a rear-view camera.

Just below the screen are three large foolproof rotary controls for the automatic climate control. Air — heated or chilled — is served efficiently on demand. Easily seen through the upper arc of the leather-rimmed multifunction wheel are three easily readable dials (classic white figures on black faces) for revs, speed, and a combination dial for fuel and coolant temperature along with a graphic for the four-wheel drive. A trip display sits in the lower half of the speedo and also shows which of the autobox's five gears is currently engaged.

Deep side windows combined with seats mounted close to the floor (while you sit low inside the cabin, you're already riding high thanks to the all-terrain suspension and 8-inch ground clearance) and clearly defined 'corners' on the bodyshell make for fine all-round visibility and accurate placing of the Barbarian despite its length. The steering wheel only adjusts for height but achieving a commanding driving position is nevertheless a quick and hassle-free operation.

The well-shaped, well-padded, black leather, 'Barbarian'-branded (in white stitching) front seats are nicely bolstered and maintain comfort even over long journeys; separated by a big, padded centre armrest, there's plenty of elbow, shoulder, and leg room, as well as a fist of headroom. And, in spite of the 2.5-litre turbodiesel working away under the bonnet, the cabin — most notably at legal-limit motorway speeds — remains pleasantly quiet.

Not only can the L200 carry bulky loads in its huge loadbay (as much as 1,060kg), but inside there are plenty of practical-sized cubbies for personal items including a good-sized lockable glovebox and deep but slim door pockets that take small cans or bottles — remember, that doesn't mean you can drink while driving! Plus there's an overhead sunglasses holder — always useful.

A DC (double cab) extends the workhorse L200's utilitarian two-seater truck cockpit into a five-seater family-friendly cabin. In fact, the double cab's rear seats are unexpectedly agreeable — not a single complaint from any of our rear passengers during our busy week with the Barbie.

Access to the rear cabin is easy. Once there, you sit about six inches higher than those in front. Two adults, sharing the big fold-down centre armrest and enjoying comfortable outer armrests and meaningful under-thigh support (usually missing from many cars' rear seats), can really relax.

Knee room is also good, as too is foot room; and there's several inches of headroom even sitting up straight, although that's not so easy as the backrest slopes pleasantly back. Bottle/can holders and twin cupholders are also provided and appreciated.

Another handy and much-liked feature is the cab's rear window; power-operated, it's great for providing some real fresh air flow-through on hot or muggy days as an alternative to artificial chilling AirCon-style.

All L200 models share the same basic 2.5-litre four-pot turbodiesel but higher-spec versions such as the Barbarian get a higher-output version — with 175bhp as opposed to 134bhp. They also get more torque — 258lb ft instead of 231. However, while five-speed automatics produce their maximum torque at 1,800rpm, the five-speed manual gearbox models generate more (295lb ft), albeit slightly later, at 2,000rpm.

With its high-riding body you wouldn't expect the L200 to take off like a scalded cat from the lights. Actually though it's quick enough to mix it with mainstream passenger cars — zero to 62mph comes up in a respectable 13 seconds; maxed out you could see a more than adequate 109mph showing on the speedo although it's 'natural' cruising gait feels to be between 70 and 80mph.

The official fuel economy stats are 32.1mpg (combined), 26.6 (urban), and 35.8mpg (extra urban). Real-world driving (with an empty loadbay and no towing but making fair use of the 4WD) saw a credible 28.4mpg. And with the auto transmission it is an undemanding drive: changes are smooth and the 'intelligent' autobox learns and adapts to your driving style. And should you need to you can, by nudging the selector lever to the left into the +/- gate, override the auto to make manual up/down changes whenever you so wish.

Torque or 'pulling' power is crucial for a working truck; equally so for lifestyle applications such as towing a caravan or boat. Here the Barbarian's muscular 258lb ft and selectable all-wheel drive complement each other, making it not just more than competent off-road but ideal for towing up to 2,700kg braked.

We didn't take this particular Barbarian off-road because we've done it before — even on 'black' runs these tough pick-ups aren't fazed by much, and their go-anywhere rep is easily substantiated if you don't mind an intense power-wash session after play.

In the rough, the Barbarian's four-wheel drive is easily activated. Between the meaty selector lever and your left thigh sits the Super Select 4WD lever (normally this is left in 2WD with the rear wheels being the driven pair).

At speeds up to 62mph on road (if you were going off-road you'd make damn sure you were already in four-wheel drive before you left the blacktop) you can move the lever into 4H for full-time all-wheel drive. Do so and you'll physically feel — really! — the Barbie's 'stickiness' instantly scale up.

For snow (or even Saharan sand after the next strong wind from Africa!) you'll need to stop before selecting 4HLc (that's high ratio four-wheel drive but with the centre differential locked); tackling post-apocalypse terrain, steep hilly trails, deep mud and the like, you'll do best in 4LLc (low ratio with the diff locked).

Back on the blacktop the off-road-capable L200 rides pretty well, and even without some weight behind the cab (either carried or pulled along behind). And it feels reassuringly composed — earlier models could be a tad tail-happy running unladen in 2WD. In addition to all-wheel drive, Mitsubishi's Active Stability and Traction Control system is also fitted as standard for those times when a little professional nannying is appropriate.

Pick-ups continue to increase in popularity with lifestyle users and this 2014 model Barbarian Double Cab now rides better than ever before; and while its tough on the outside, it's well-mannered and comfy enough on the inside for the other sex to enjoy driving too! — MotorBar