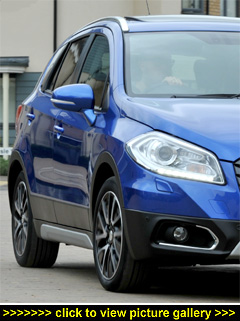 “A crossover, like man’s other best
friend, is not just for Christmas.
Given the sad state of our ever-
worsening roads and increasingly
unpredictable and often extreme
weather, a 4WD crossover’s higher-
riding, go-anywhere-on-any-road
ability is something you need not
just in the winter, but every day
of the year...”

CROSSOVERS ARE HUGE with UK motorists — sales-wise — due to them offering the elevated appeal of a conventional 4x4 but without the bulk, crippling purchase price and heavy-duty running costs. Suzuki's smart-looking, all-new SX4 S-Cross, with prices starting from a competitive Ł14,999, affordable running costs, head-above-the-crowd SUV looks and must-have all-wheel drive, is sure to be a big hit with drivers.

And yes, there are a number of rivals for your money, starting with Nissan's Qashqai, the Ford Kuga, Hyundai ix35, Kia Sportage, Mitsubishi ASX, and Skoda Yeti. And you might also think about compact crossovers such as Nissan's Juke, Peugeot's excellent new 2008, and the Mokka from Vauxhall.

So what do you get with the S-Cross? A lot. For a start, five doors and five seats, and a choice of petrol or diesel power: both 118bhp 1.6-litre engines, and both available with 2WD or all-wheel drive (Suzuki's latest ALLGRIP 4WD system).

Running costs are kept low by a 51.3mpg average economy and 127g/km emissions from the 2WD unleaded-drinker, and 67.2mpg with 110g/km from the 2WD DDiS turbodiesel.

Even on 4WD models the economy is still good: 47.8mpg petrol; 64.2mpg diesel. After a hard week covering a lot of country roads and backwoods lanes our 1.6 petrol posted a 44.3mpg average. Pretty good going for a 4x4! And it's fair to say that most owners will do better.

Five doors and a large boot (actually one of the biggest in its class) it might have but that doesn't stop the S-Cross being the perfect size for today's overcrowded roads or, for those few who still use one, a garage — 4,300mm from nose to tail and 1,765mm in width ensures it's easy to manoeuvre in traffic and easy to park in any supermarket or on-street bay.

Visually the S-Cross has a strong hint of five-door hatchback woven into its high-riding crossover bodyshell (ground clearance, incidentally, is a useful 165mm). The horizontally slatted black grille is a distinctive feature, as too are the large headlamps (with daytime LED running lights) cut into the front wings under the clamshell-look bonnet either side of it. Add in a well-planted stance and you won't have any trouble finding your S-Cross when you return to the car park.

The very first thing you notice on climbing aboard is the light. It floods the cabin. That's because there's a full-length double sliding glass sunroof — a world first, as it happens. Powered one-shot-op sunblinds take the sting out of the rays if you prefer your sunshine filtered. You can't beat a bright and airy cabin to travel in; and along with plenty of light there's also plenty of space front and back.

Fit and finish is first-rate, with an upmarket look and feel to the soft-touch trim; plus there's just enough silver highlights to enhance, not spoil, the ambience. The dash itself is nicely 'clean' and easy to get along with — in fact, everything you need is where you'd expect to find it, from the two-zone climate controls to the stereo buttons.

The multifunction leather wheel also conveniently houses controls for voice, phone, audio, speed limiter and the cruise control. The blue-ringed dials, with white on black markings, are superbly clear; and the touchscreen SatNav intuitive, with concise and accurate spoken directions. Plenty of cubbies and bins (including bottle-holding ones on the doors) and a sunglasses holder help keep everything shipshape.

You sit tall in comfy, well bolstered chairs upholstered in black leather. The heated (two-stage) front seats have good under-thigh support, and both are height-adjustable, as too are the seatbelts.

And with plenty of steering wheel adjustability and commanding all-round visibility, setting a first-class driving position is the work of seconds. And thanks to keyless locking (front doors and boot) and start there's no fumbling with keys before or after entering the car — a quick press on the Start button and you're ready to roll.

The rear doors open wide for smooth entry to the back cabin. The comfortable rear bench is set about six inches higher than the front seats so fine views out helped by a split backrest than can be set at a relaxing angle or, if you need to really maximise luggage, at a more upright (but still usable) position. Well padded outer armrests and a wide drop-down centre armrest complete with built-in cupholders ensure that two travel very nicely thank you. Three is doable, and there's enough foot room to go around. Equally important, knee and leg room is good with about six inches of space between the average adult's knees and the back of the front seat.

The boot will swallow a family-sized 430 litres of luggage but fold down the rear seat backrests and you'll have a continuous loadbay floor with room for 875 litres. If you love your back then you'll be pleased to hear that the S-Cross's boot has a two-level panel that lets you raise the floor by around five inches to match the cargo area created by folding the rear seatbacks, so minimising the chance of a strained back when loading or unloading. With it set at its lowest level, even awkward items such as a baby buggy will fit in with no problem.

And if you need to tow, the braked towing capacity is 1,200kg (1,500kg for the diesel but then it's got twice the torque of the petrol unit: 258lb ft vs 115lb ft). The boot also features a number of shopping bag hooks, a pair of lidded cubbies, luggage net with tie-down hooks, and a 12V power supply. Another neat touch — the floor panel is self-supporting so both your hands are free when using the underfloor storage area.

Providing all the grip you'll need in all weathers is Suzuki's new 4WD ALLGRIP system. Any of its four modes can be quickly selected using the foolproof push and turn dial on the centre console, making it simple to manually lock the car in 4WD — or just leave it in Auto to decide for itself when to send drive to all four wheels. Do so, and in Auto the default 2WD is selected for maximum economy; but the instant all-wheel drive is required it will switch instantly and automatically to 4WD for you.

Sport is the setting to dial up when you're pressing on, especially along twisty roads where you'll be wanting 4WD cornering grip. At lower speeds, Sport also sharpens up engine response to your right foot. Snow mode, as you'd expect, is for full-time 4WD grip in slippery road conditions (both on and off road). Lock mode is for extricating the car from snow, mud or sand.

More good news: using all-wheel drive doesn't cost you dearly at the pumps, either. In fact, the impact on efficiency is minimal, as mentioned earlier: 47.8mpg for petrol four-wheel drive models; and 64.2mpg for the 4WD diesels.

The petrol-engined SX4 S-Cross uses a four-cylinder 1.6-litre engine that produces 118bhp and 115lb ft of torque. It's an eager unit, more than man enough to do anything your right foot asks of it. Enhancing the driveability are light but progressive pedals and a snappy and accurate gearchange action on the five-speed manual 'box.

Living with an S-Cross is more than satisfying from behind the wheel, particularly so the ride comfort — bumps are soaked up and driving around town passengers are well insulated from road and traffic noise. The 17-inch alloys are shod with 205/50-profile tyres, so no ride comfort penalties there either.

If you were to think that you pay a price in handling for the S-Cross's pleasant ride, then you'd be wrong. It's sharp and composed enough to make it fun to drive.

Unlike some 'roly-poly' crossovers and SUVs, the SX4 doesn't lean much when it's cornering and its decent body control, combined with plenty of grip, keeps it balanced and predictable when getting a move on along more challenging roads, where it feels agreeably agile and responds reassuringly to the helm.

The steering feels good on the run with adequate feedback but is light enough to keep parking easy. When you need to kill your speed, the nicely progressive brakes pull you up strongly.

Everything about this new Suzuki crossover is 'easy' — it's easy to live with, and it's easy to drive. And it will suit many, serving up driving enjoyment even on the daily commute alongside ample versatility for active lifestyle families.

And given that the S-Cross is cheaper than quite a few conventional family hatchbacks, it's likely to temp many more traditional hatch users to cross over. Factor in the high equipment levels, low running costs and the must-have 4WD and it's easy to see why it should be sitting at the top of your shortlist. — MotorBar