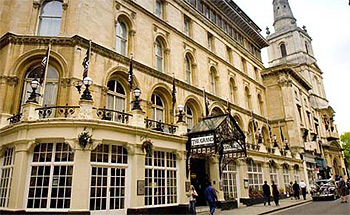 “It is difficult to find just
the right hotel for Bristol
as some are out of easy
walking distance from
the city centre and those
within the central area
rarely have a car park...”

WE FOUND THE GRAND HOTEL in the very centre where it enjoys a quiet street location — and their multi-story car park is tucked just around the corner out of sight, with special rates for residents.

The hotel's facade had all the classic Victorian features but inside reflects more of today with all the modern amenities that you expect and want. For a city centre hotel, the room size was quite generous; the bathroom particularly so.

The feature that flattered the hotel most was the service — it was most efficient and personable. Nothing seemed too much trouble and a thoughtful touch was that we were offered the same table for breakfast as the one we'd dined at the previous evening.

It's always a good sign when local families and couples frequent a hotel's restaurant and there was plenty of evidence of people having a good time celebrating the latest football game, together with families out on a jolly. A very good indication of what proved to be a good eatery. The food was well-cooked, good value and obviously made with fresh ingredients — we could happily return.

We had not been to Bristol for over a decade and, my, haven't there been a lot of changes: the dockland wastes are now largely renovated with the waterways ringed by some quite interesting developments. Unlike many towns and cities, Bristol's waterways provide a practical means of moving around for the locals — not just for tourists.

Retail therapy is now an important part of a hotel stay for many and so a visit to the St. Nicolas's markets was a must — something for everyone; for me there was an amazing array of fossils at very competitive prices. Those looking for more traditional shops will be spoilt for choice because, just a few minutes walk away, you'll find every brand including Harvey Nichols.

One stop on the ferry — at which everyone should alight — is for the SS Great Britain. No wonder they have won a fistful of awards. This is no tacky Disney creation; it is the real thing of fundamentally the most advanced ship of her age — a single leap from the dark ages into modern times. The presentation is truly excellent for all ages, there are a few surprises and the whole experience is genuinely captivating.

Up the hill — a bit of a walk — there is elegant Clifton where you can wander along streets of refined houses and enjoy a superb view of Brunel's suspension bridge and, of course, there is a world-renowned zoo.

We normally do not visit zoos but this one is the world's oldest provincial zoo and is recognised for its extensive research work. We thought a quick glimpse would suffice for this article but it was over four hours later that we finally managed to drag ourselves away. Plenty of high points: the children were particularly captivated by the frequent displays given by the keepers of their most appealing creatures. Surprisingly, the Twilight Zone did not scare them; and they were enthralled whilst in the tropical rainforest-themed Butterfly House where these brilliantly-coloured creatures flew freely all around us.

The gardens warrant a visit in their own right as they are beautifully presented with both tropical and local planting. All in all, a great day out for all the family — great fun, highly entertaining and entertainingly informative.

If you can leave the buzz of the city behind, not far from Bristol is the National Trust's biggest ever building project — Tyntesfield. The scale is extraordinary even for a Victorian 'Trophy' house; you can imagine the huge sums involved to restore it now. Part of the appeal is that all the original furniture and other goods and chattels (right down to dustpans!) are all in place.

A UNESCO World Heritage Site that everyone will enjoy is Bath, barely a dozen miles away. The small city centre is full of neo-classical architecture: plenty of high spots to savour but even so Robert Adam's famous Pulteney Bridge fails to make the shortlist — it's exceedingly hard to find a 'best' viewing position. No doubt best seen from the River Avon it straddles! The historic Abbey, the Pump Room and just the general atmosphere are hard to beat; others prefer the Royal Crescent, the Roman Baths and, hopefully, many will like the new spa largely famous for its fabulous construction costs.

Forget going by car to Bath as the traffic on leaving moves slower than pedestrians — it's best by train so, as they say, let the train take the strain.

Further afield to the extent of being a little west of Taunton is the Grade One listed Cothay Manor with its stunning gardens. The subject of love/hate TV programme Country House Rescue — I generally love the houses and owners. If there is a garden to put Sissinghurst Castle in its present incarnation in the shade, this is it. Magical and well worth the effort of seeking it out. — Bonnie and Tim Stevens