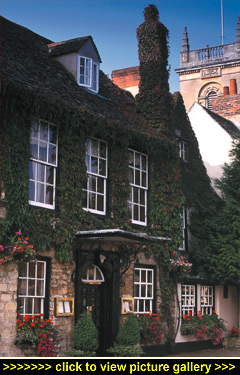 “Tourists cross the world to visit
‘England’s green and pleasant land’.
And Oxford, quite rightly, is always
high on visitors’ must-see lists.
With its genuine hospitality, the
Macdonald Bear Hotel at Woodstock
makes an excellent base from which
to explore...”

ASK A FOREIGNER TO DESCRIBE THE RURAL IDYLL OF ENGLAND and you immediately assume they wear rose-tinted glasses because their answers usually include some, or even all, of the following descriptions: rolling countryside with swathes of flowers; noble hedgerow trees with cows lazing in their shade in the patchwork of green fields; picturesque villages with stone or thatched houses clustered around a market square or with a wide tree-lined street for the market with the 'big house' somewhere nearby within its parkland — inevitably designed by Capability Brown. Getting more detailed now; there has to be a pretty, ivy-clad historic coaching inn with a super-abundance of beams, open fireplaces, squeaky floorboards and a rich helping of atmosphereÖ

In reality, countryside like this is hard to find — but it does exist in the Oxfordshire Cotswolds and for us it was Woodstock, just north west of Oxford city.

The coaching inn is the four-star Macdonald Bear Hotel, sitting right on the market square where a hostelry has existed for over a thousand years. The main building is largely sixteenth century whilst the latest addition is the integration of the former glove factory next door. A very appropriate touch is the display of a collection of elegant gloves and some of the machinery.

Woodstock hand-made gloves are still known throughout the world, and can be obtained in several local shops. One famous user of Woodstock gloves was Queen Elizabeth I who was imprisoned in the Manor House by her sister, Mary Tudor — the same Manor House, incidentally, where Henry II spent much time at Woodstock with his mistress, the beautiful Rosamund Clifford, aka the 'Fair Rosamund' of legend.

Our room was in the reclaimed glove factory — plenty of beams to show its age, a four-poster bed and a spacious bathroom. All conformed to the rose-tinted glasses description, as did the presentation of the in-room tea and coffee facilities. We enjoyed a discreet bottle of Rioja at £22 from room service — the accompanying wine glasses were, naturally, lead crystal. It was a generous touch, too, to have a small box of delicious chocolates — in place of the usual single chocolate on the pillow — together with a hand-written welcome card from the housekeeper and a platter of fresh fruit.

Breakfast was a triumph, offering all the normal options available from the buffet to individually-cooked dishes on request. From a personal point of view, the appearance of foil-wrapped butter in the dining room gives the impression of a 'we do not care about the details and everything is too much trouble' attitude. So the sight of the generous nugget of butter in its porcelain dish at The Macdonald Bear was heartening, as were the individual glass jars of conserves and the freshly starched table linen.

The Macdonald Bear hotel is surprisingly big: fifty-two rooms — all different and well furnished — most with spacious bathrooms, some just a little too traditional and in need of some up-dating. With a large staff of forty to tend to the guests, service levels are good and personable. Despite having a new general manager, Sam Aziz, who has only been there for a month, they are very much a team with assumed ambitions to keep their more illustrious five-star sister Macdonald hotel, the Randolph in Oxford, on its toes.

We have rarely come across such a friendly and relaxed atmosphere. A facility surprisingly not missed was a gym as the more than expansive Capability Brown park of Blenheim Palace is literally around the corner where you can run, walk or just indulge in absorbing the unique atmosphere of an important piece of English heritage and, you never know, you might just meet the neighbours.

A thought that must go through many people's minds is that this is a great area in which to live and work; the rightly-fabled city of Oxford just down the road, and a drive of an hour opens up a whole chapter of alternatives from Stratford on Avon to several of the bases of the Formula One teams — the Renault team have been seen on a number occasions in the Macdonald Bear Hotel. A revealing glimpse in an estate agent's window says that only F1 teams can afford the prices, but then the Cotswolds is a particularly beautiful part of England.

We stayed at the Macdonald Bear Hotel as we wanted to do justice to the Art in Action event in nearby Waterperry. A single day proved too short on our first visit last year. The four-day event — one of the UK's longest running art and craft festivals — is so extensive and with so much of interest, that this year a two-day visit was planned. Even so, that still wasn't enough time to attend any of the short practical courses or absorbing lectures. During the summer there are numerous attractions and events in and around Oxford that are of national quality, although there are some aspects of the city that are not so likeable.

As an enthusiast for all things in design, the centuries old architecture in Oxford has great appeal. From the dreamy spires through the college quads to the tremendously characterful and colourful covered market there is much to be savoured — if you can handle the traffic and parking. Because all is not perfect: Oxford's traffic and parking congestion require saintly patience. Oxford also has its 'Heathrow Terminal 5' moments, which include the Said Business School (looking like an empty Lego bus depot with a faux tower appropriately parked next to the railway station) and the Jacqueline du Prť Music Building: a boring, some would say offensive, box without charm in which it is best to listen with your eyes firmly shut.

Most of us like to see even the most ancient of racing cars being used as they were intended in competition, hence the success of the Goodwood Revival meetings. A shame then to see in the Ashmolean Museum that their most prized Stradivarius, the Messiah violin, has not been played in generations — as was a condition of its gift to the museum. Most of these extremely rare, most valuable and precious instruments are in regular use and thousands enjoy their sublime tonal qualities. Apparently it would need a little TLC to strengthen it but then the Messiah violin's illustrious motor racing counterparts run some risks of damage by being driven with verve; and we have the pleasure of hearing, seeing and even smelling these legendary treasures as their makers fully intended.

The Cotswolds hold so many pleasures for both the active and the just downright lazy! You don't even have to go very far because there's much to see in and around Woodstock itself — Woodstock, for example, has been a Royal Manor since time immemorable with the earliest records dating back 50 years before the Norman Conquest, when Ethelred held council here. Successive monarchs have used the Manor House as a lodge while hunting in the forests which surrounded the Palace.

And a short walk down the street and through the Triumphal Arch of Blenheim will reveal an entrancing view over Capability Brown's lake to the magnificent Palace beyond. Once there, you may wander at will through the most beautiful park in England. Whenever you go — a short visit either mid-week or at the weekend — you'll come away revitalised and as a place to stay while exploring this 'green and pleasant land', the Macdonald Bear Hotel fits the bill admirablyÖ Perhaps we should say, like a glove! — Bonnie and Tim Stevens